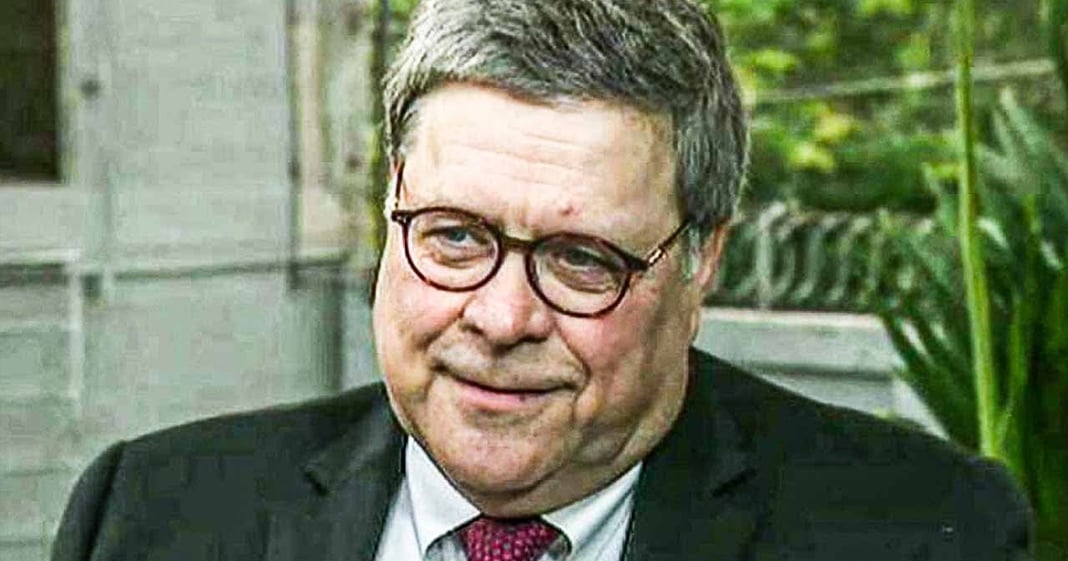 The Attorney General of the United States actually defended the tear-gassing of unarmed protesters over the weekend by saying that tear gas isn’t all that bad and that it isn’t even a chemical irritant. That’s a complete lie, as pepper spray is classified as a chemical irritant by definition, as are all tear gasses. The Attorney General is trying to downplay the severity of his and Trump’s actions, as Ring of Fire’s Farron Cousins explains.

Attorney General William Barr appeared on CBS’s Face The Nation this weekend, where he actually defended, the white house’s decision, his decision to tear gas the protesters that were in the way of Donald Trump’s photo op last Monday. During the interview, Bill Barr said that these were not in fact peaceful protestors as the media continues to claim, the media has got that part totally wrong, Bill Barr says. He said that they were warned three times that they needed to stop throwing things, because that’s what he says they were doing. They were throwing things. There were projectiles, which is a fancy word for throwing objects. They were more than three times that if you don’t do it, we’re going to gas you and you’re going to get the hell out of here. Allegedly, these protesters didn’t care that they were being warned. They kept throwing items.

And so then the order was given to a gas them, although as Bill Barr said in the interview and the administration said late last week, let’s not call it gassing them. That’s just, that’s so wrong. I mean, that’s what we accuse other countries of doing to their people before we go and invade them. Right? I mean, that’s one of the reasons we’re engaged in so many different conflicts in the middle of middle East is because of the talking point, he gassed his own people. How many times you heard the administration, not just this one, but any administration in the last 20 years say that about a regime. They gas their own people. So we had to go in there and carpet bomb the hell out of them. That’s one of the reasons the administration says, don’t call it a gas attack because these are not chemical irritants. Bill Barr also said on Face The Nation on Sunday, these are not chemical irritants. There was no tear gas used whatsoever.

So let’s address his first claim, right? That these were angry, vengeful, violent, spiteful protesters who ignored warnings from police. Well, as it just so happens, CBS had three reporters who were there with those protestors and Bill Barr was making these claims on CBS and so the host was able to say, oh, not so fast, Mr. Attorney general of the United States, but it appears that you’re lying because my colleagues were in attendance here. Nothing was thrown, no warnings were given, all of a sudden they were being gassed. So you’re lying about that, Mr. Attorney general of the United States, you’re lying to the American public. Okay. So we got that one. Now the second one as Bill Barr says, no, there were not chemical irritants, pepper spray is not a chemical irritant. It’s not chemical. In fact, actually by its very definition, it is. Peppering, peppering I believe it is pronounced. I don’t know, but that doesn’t matter. That is in fact, a chemical. That is the chemical found in pepper. So pepper itself, even when it’s not in a spray is in fact a chemical. I mean, that’s just basic science. Now you put it in a spray, then at that point it does become chemical as in a noun because that is an artificially made or processed, aerosol.

You turned it into a chemical. By any definition available, pepper spray is in fact a chemical, and it says right there on the canister that it is an irritant. It’s labeled and marketed as an irritant and here you are the attorney general of the United States, the top cop in the country, lying to the American public saying, nope, this ain’t no chemical irritant. When in fact it is, and it is classified as a tear gas because contrary to what this administration believes, tear gas is not a, a product. You know, it’s not like saying band-aid. Tear gas is a classification of chemicals of which pepper spray is included. These smoke grenades that they also threw at these protesters as Bill Barr freely admits yeah, we threw smoke at them, but that’s not, that’s not tear gas. No, it is because it’s designed to irritate people, to get them to clear out. You’re lying to the American public. You’re arguing with this CBS host about semantics and you’re telling her that things that she knows did in fact, not happen, did happen. The attorney general of the United States right now is a bastard. Bill Barr is a bastard. He is a lying SOB and that is exactly why he was chosen for this job to begin with.