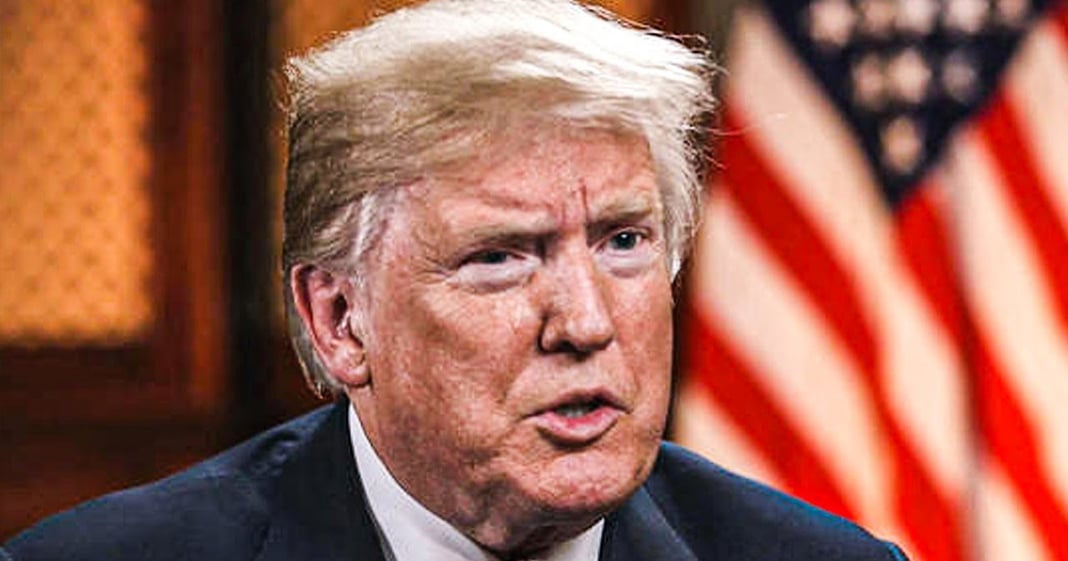 Donald Trump’s reelection campaign is furious about the use of tear gas. But not the actual chemical agent, just the phrase. The campaign sent out a letter this week saying that “every media outlet” was lying about the use of tear gas, as they only sent out smoke grenades, pepper bombs, and other irritants to disperse the protesters. But that is EXACTLY what tear gas constitutes. Ring of Fire’s Farron Cousins explains what’s happening.

Donald Trump and his reelection campaign are absolutely furious right now about the use of tear gas in the United States, but not the actual thing, like not actual tear gas. What they’re mad about is the fact that the media is using the word or term tear gas. That’s what they don’t like. They don’t like the use of that tear gas and so what they did earlier this week, Tuesday evening, I think it was, they sent out a letter to media outlets across the country, telling them you’d better stop using that phrase, tear gas to describe what the Trump administration did to protesters on Monday evening before his photo op, because it wasn’t in fact tear gas, it was pepper bombs and smoke grenades, not tear gas, you jerks. So you’re lying they said. In their letter, they accused the media outlets of lying to the American public about what was used on those protesters.

Because every single person in this administration and reelection campaign is a total moron. You see folks, I don’t know who doesn’t know this. So I’m going to go ahead and explain it real clear for you. Tear gas isn’t an actual product, right? Like you don’t go into the military supply store and say one canister of tear gas, please, good, sir. Because tear gas, isn’t a product. Tear gas is actually a class. It’s a class of chemicals. They’re referred to as tear gas because the primary effect that they have on human beings is that they make you tear up. So essentially anything that does this, is classified as a tear gas, as an irritant. Tear gas is just a label we slap on it. They could be called irritants, projectiles, chemical weapons, which, which term would you prefer Trump campaign? Because they’re all applicable and they’re all accurate. The most common tear gas is the pepper spray and yes, it causes burning and it causes the eyes to tear up when they burn, because that’s what happens to eyes when they burn.

But they’re furious because they don’t understand that tear gas is not an actual product and they think that the media is out there lying to people about what happened when in reality, the Trump campaign, the Trump reelection campaign is actually just out there telling people, hey, look at how stupid we are. We don’t understand a very basic thing about these chemical weapons that we are using. We just don’t like what you’re calling them, because we don’t understand what that actually means. It’s not difficult, folks. There is a reason these gases and fumes and other projectile irritants are banned in international warfare, but they’re not banned on the streets of the United States and Donald Trump, his administration at the direction of Bill Barr, as we now know, took full advantage of the fact that we haven’t banned them here. It doesn’t matter what you call it.

You can call it tear gas. You can call it pepper spray. You can call it bad smoke juice for all I care. What happened was a violation of these people’s first amendment rights. They were not breaking the law in any way, shape or form. They were exercising the very rights that the founding fathers included in the bill of rights. The Trump administration crapped all over that by administering this gas, this pepper spray, these smoke grenades, all of it. So if you want to quibble over what to call it, then you’re fighting the wrong fight and I can go ahead and tell ya, you already lost at that point.