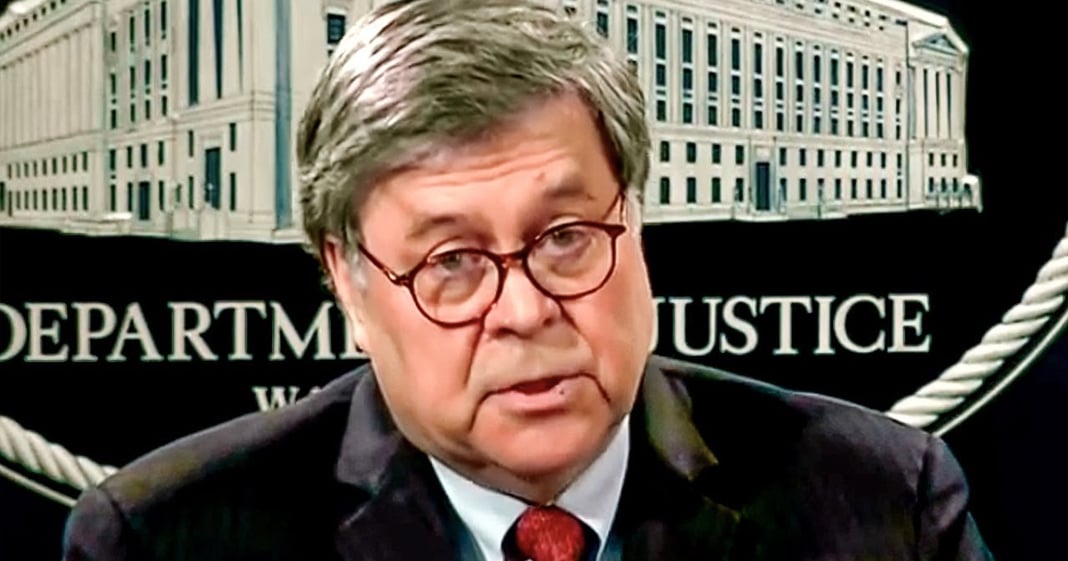 This week, an unidentified group of “officers” appeared in Washington, D.C. with no identifying badges or law enforcement logos. The men claimed that they worked for the Department of Justice, and if this is accurate, then it means that Donald Trump and William Barr have mobilized their own task force of soldiers to protect themselves and intimidate protesters. Ring of Fire’s Farron Cousins explains what’s happening.

There’ve been lots of disturbing reports coming out of this week. Obviously one of the most disturbing is the fact that Donald Trump wants to unleash the United States military on the streets here in the United States, in order to quell the protesters and essentially just instill a sense of fear into everybody. He wants to rule by fear. That’s what this threat of military presence is all about. Well, the DOD department of defense doesn’t necessarily agree with this and the Pentagon has a kind of wavered back and forth about whether they’re actually going to give him the troops and if they do, oh, we gave you some, now we’re going to pull them home. But maybe we’ll leave them for a little bit longer. We don’t really know. So the Pentagon doesn’t know what the hell they’re doing, but the white house does and so does the department of justice.

And throughout the week, there have been hundreds of armed soldiers patrolling areas of DC. Now these individuals look like a cross between a army soldier and a police officer in riot gear. They’re all dressed the same. So it does look like they are all obviously together. This is not some kind of haphazard militia, most likely because they are dressed identical. However, these hundreds of soldiers patrolling around DC including sometimes guarding monuments, guarding outside the white house, have no identifying markers on them at all. When they have been asked, who they’re working for, what, what department they’re from, what’s going on. Most of the time, they refuse to give an answer, but occasionally some of them have said they are working for the department of justice. Now the department of justice does not have a standing branch of the military that they can control. In fact, they can’t control any part of the actual military whatsoever.

So if they are there working for the DOJ, it is safe to assume they’re actually there at Donald Trump’s own request. It’s likely if their stories check out and it’s not just a bunch of right wing hooligans from around the country coming to DC to play soldier for a few days. But if they are in fact being ordered by the government to be there, it is likely Donald Trump talked with William Barr about his abilities as commander and chief of the armed forces and what he could do to put soldiers around DC, not just to intimidate and squash the protests, but also to protect himself because Donald Trump right now is living in fear. He’s trying to convince us that he is not afraid, but he is very afraid because he understands what these protests are about. It’s about changing the power structures here in the United States. It’s about fixing things, making things far more equal.

That’s what it’s about on so many levels and that terrifies a guy like Donald Trump, who has benefited from our rigged system. It terrifies most of DC who continues to benefit from this rigged system and they want to protect it. So they’ve got their little soldiers marching around all over DC. We don’t know who these people actually are, where they’re from or who they’re working for and that folks is terrifying. It’s bad enough to have actual United States soldiers out there in the streets. But at least with those folks, we know who they are. We know where they come from. We know who they report to this group, this little militia that Trump and William Barr have unleashed on DC, we have no idea. These could be soldiers. These could be, you know, retired soldiers. These could be crackpots that they pulled off the street and gave uniforms and weapons to, we don’t know and that is the most terrifying part about all of this. We don’t know who Donald Trump’s little private protection service is.

But we need to, we have to, this is the kind of thing that Congress needs to look into. When you stop a soldier on the street and say, what department are you with? And they say, the department of justice, that should raise some red flags because the DOJ does not have a standing military. But that is exactly what these men patrolling DC are and we need a hell of a lot more answers before we just submit to this martial law that Trump and William Barr have put in place. We have to know who these people are, who are trying to tell us that they’ll shoot us if we cross the line. This isn’t okay. This is the kind of thing you do see in those, those countries that we love to talk about being so horrible, right? Random military officers who actually aren’t military officers just hired by the dictator of the day. It’s now come to DC and we need answers.