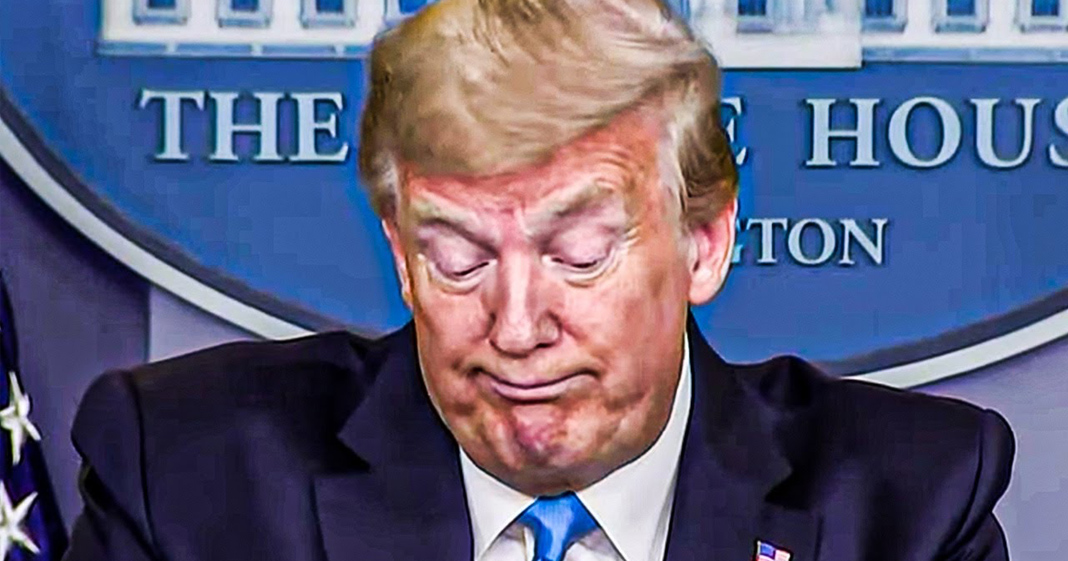 According to a report by Axios, top Republican officials are now fairly confident that Donald Trump has destroyed his chances of being reelected. They believe that his lagging poll numbers are the result of his mishandling of two concurrent crises in this country, and the past week could easily be the thing that seals the deal for the President’s loss. Ring of Fire’s Farron Cousins explains what’s happening.

Axios reported earlier this week, that Republicans, top Republicans in positions of power, both in the Senate and with the Republican national committee have now pretty much resigned themselves to the fact that Donald Trump is going to lose in November and they said that this past week is what made them come to that realization because a week ago they thought his chances were still great. They thought, yeah, okay. His numbers are dipping because of the pandemic, but once this is over and we get them out there and he does his rallies, everything is going to be perfect and Donald Trump is going to cruise to reelection. He’s going to crush Joe Biden and to be honest, a lot of us, even those of us who hated Donald Trump, we thought the same thing. Right? For what it’s worth. Donald Trump is a decent campaigner. Now he lies through his ass all the time.

And he’s a horrible human being. And he says, and does horrible things, but he gets, people worked up to vote for him. But even now, one week later, Republicans have said, yeah, I don’t think that’s going to happen. Not because they don’t think the pandemic is not going to end, they think it will. But the reason they’re freaked out right now and Axios did describe it as a bit of a sense of panic is because Trump has now been exposed. He’s been exposed twice, really, with two different crises happening at the same time and him falling flat on him face for both of them. First, there’s the pandemic. Obviously that’s the big one, right? Over a hundred thousand Americans dead. Trump screwed up every possible turn. But luckily over the last week, Americans have stopped paying attention to that because, you know, we’ve got race riots happening across the United States because cops won’t stop killing black people and in response to these protests about police brutality, the police have responded by being even more brutal, as if that makes any sense.

Like the cops are out there saying, no, we’re not the thing you say we are and we’re going to teach you that by bashing it into your freaking skull, which only proves the point. Like, yeah, the cops are what people think they are. In fact, they’re clearly so much worse and Trump has failed in that regards and Republican said a lot of it has to do with his botched little photo op on Monday afternoon, where he walked over to the st. John’s Episcopal church. Held the Bible, because this is how you hold a Bible apparently and gassed protestors before he could make the trip. That really screwed him. It had the opposite effect of what he thought it would and then of course you had later in the week where you had a defense secretary, Mark Esper come out and say, no, Mr. Trump, we’re not going to deploy the military. I’m sorry, but that’s just not a thing we’re going to do right now and then of course you had former defense secretary Jim Mattis come out and say that Donald Trump is immature and essentially compare him to the Nazis with what he wants to do with the show of military strength here in the United States.

All of those things combined his overall response to the protests, his instigation of more violence, his failure on Monday, the top military brass in this country, coming out against him, add that with his response to the pandemic, a hundred thousand people dead. An unemployment rate of almost 14%, 40 million people have lost their jobs. This is the perfect storm of Donald Trump not being able to come back from by the time November rolls around. Because folks were five months out now, five months, things are starting to get real. I know every time I talk about polls, which is really what this story is about. I say, don’t worry. There’s plenty of time. Things are gonna change back and forth up and down all the time.

I, I, we may be running out of time for that. Yeah, five months is a long time in political world and it only took two weeks for Hillary to lose her lead to Donald Trump, but watching what’s happening now, seeing no end in sight for this, do you think Trump is really gonna close an eight point national gap with Joe Biden in five months with all of this happening? Do you think Donald Trump is going to come back from his, you know, trailing in swing States of Florida, Wisconsin, Ohio, and Arizona and by the way, being tied with Biden in Texas. That’s a lot of ground to cover and not enough time to cover it all, especially with everything that’s happening. Trump’s in trouble and the Republicans know it and this is the first time since this man was sworn in that the Republicans at the top of that organization have been willing to say, yeah, this guy’s not going to win.