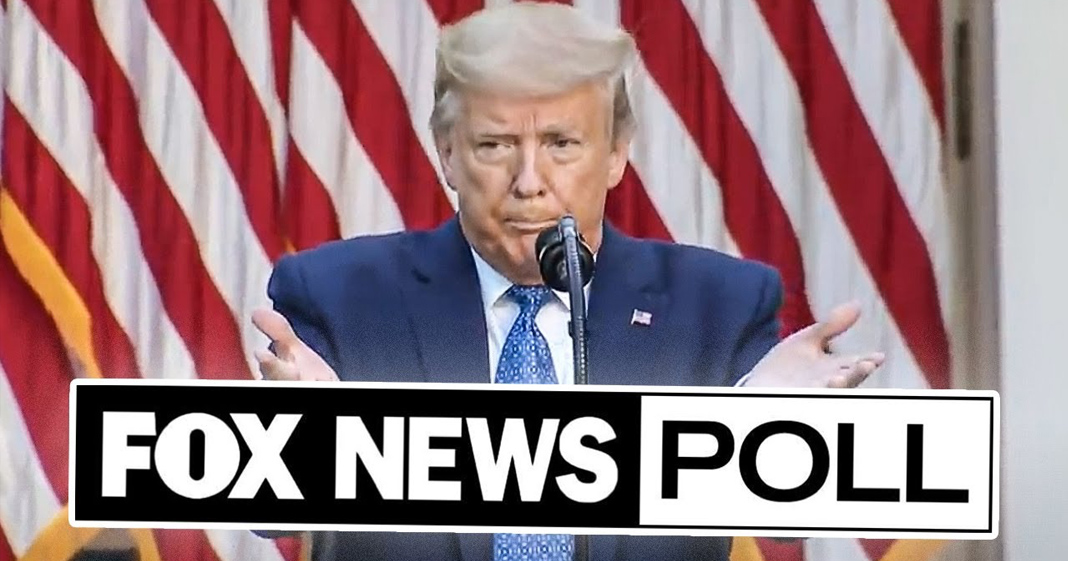 Few things make Donald Trump matter than polls from Fox News showing that he isn’t the most popular person to ever live. And if this is the case, then we’d better prepare for shock and awe as a new round of Fox polls have the President losing to Joe Biden in the crucial states of Wisconsin, Ohio, and Arizona. If Trump can’t win Florida, he would HAVE to pull in these three states, but right now it looks like he could lose all 4. Ring of Fire’s Farron Cousins explains what’s happening.

You know, I love polls from Fox news. Not because they’re overwhelmingly accurate or trustworthy or any of that, but I love them because in the last few months they have had absolutely no good news for Donald Trump and it freaks him out and causes him to go on a rampage every time one of these new unflattering polls comes out and this week we got some more unflattering Fox news polls for Donald Trump. It’s just fun. But these polls are actually very important for the 2020 election coming up in November because these polls now show Joe Biden beating Donald Trump in the crucial States of Wisconsin, Ohio, and Arizona. Donald Trump does not have a path to the white house without those three States. Unless of course he is able to take Florida, but even then it’s a little iffy and he would likely need Florida. Plus one of those other States, if not more, but if he loses Florida and loses those three States, no path to victory whatsoever.

Now he won all four of those right now, Florida was not included in this new poll, but I’m throwing it in there anyway, because Trump is currently losing to Biden in Florida as well. So here we have these massive swing States, Wisconsin, Arizona, Ohio, Trump won all three of them in 2016. He is now losing to Biden in every one of them. Ohio is the one that is most surprising to these political analysts over at Fox news, because a couple of weeks ago, it didn’t seem like Trump had a chance of losing Ohio and now he is. Wisconsin, also very important, a very good barometer by the way of the Midwest in general. Wisconsin is typically, you know, a trendsetter, I guess you’d call it in terms of the election. So if Wisconsin is going to go to the Democrat, you can bet a couple of those other Midwest area swing States likely would go Democrat as well.

Arizona also interesting, right? The former red state. Their Senator Martha McSally is now losing by 12 points to her democratic challenger. Donald Trump is now losing Arizona to Joe Biden and I keep saying this and I have to say it just almost at this point as a disclaimer, but sure these polls could change between now and November. Lot’s going to happen. I mean, hell, two weeks ago, nobody could have predicted what’s happened in the last two weeks, nobody. You know, the pandemic who knows what’s gonna happen with that. We had 20,000 new cases on Wednesday, horrifying. That could be indicative of a second wave of infection starting to hit. So yeah, anything could happen between now and November, but the problem is for the incumbent, this, it happens to be obviously Donald Trump, when bad things happen, it always goes against the incumbent.

You know, it’s not like there’s a bad thing that pops up and suddenly people are like, oh my God, we got to reelect this guy. No these happen on their watch and that’s why bad things are always bad for incumbents. I know that seems logical because it is logical, but a lot of people don’t necessarily realize that. You know, you have Republicans out there right now telling us that these protests are somehow great for Donald. They’re, they’re really not, folks. The polls show a majority of people agree with the protesters. Now, if those polls were the other way, it would be good for Donald Trump, but you have to take the whole picture into consideration. When people agree with the protesters, that means they disagree with the people fighting the protesters, which includes the president. So Trump is losing the swing States. He is losing, obviously the blue States. He is losing other States that have traditionally been red.

This could be a very big sweep for Joe Biden in November and then we all get to look forward to four years of, you know, nothing. No improvements, but not making anything worse and unfortunately, given Donald Trump’s actions just in the year 2020, that’s what we have to go with. We do have to go with dear God, let’s not make things worse. You know, as bad as Joe Biden might be, I seriously doubt he would ever order the United States military to just walk around US cities, to squash people’s first amendment rights. You know, even some of the hardcore leftist anti Biden group have now had to come out and say, listen, okay. What we’ve seen from Trump in the last week, dang, like we do got to vote Biden. You know, maybe we can’t even do a protest vote anymore because Trump is so dangerous.

That’s, that’s scary enough as it is. But that is where we are and not just us in progressive media, not just you watching this video, but the country as a whole. We’re seeing how terrifying Donald Trump can be. We’re seeing a man who is absolutely drunk with power right now, and he’s abusing that power left and right. It’s not going to end well for him. It really, and truly isn’t and these Fox news polls showing these new horrible numbers for the president are just the latest example of the fact that the president is not only turning off moderate voters, but he’s losing lots of regular old Republicans as well.