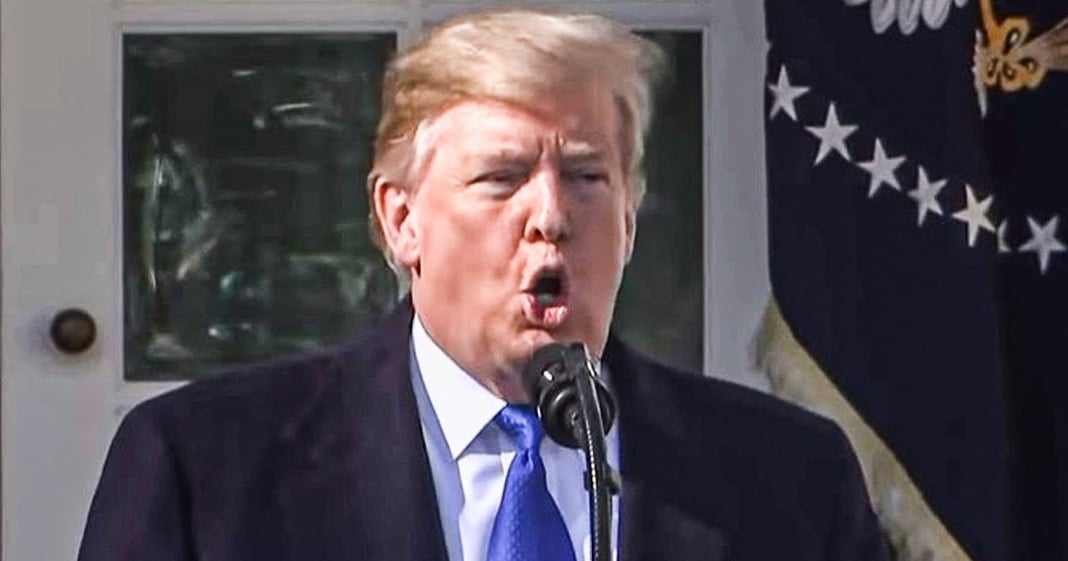 There really is only one group that Republicans can always count on to vote for their candidate, no matter what: White Evangelicals. But this voting block, which is shrinking every year, is now abandoning Donald Trump. The President has lost 15% of his support from this group in just the last two months, and it will be extremely hard for him to win them back over before November’s election. Ring of Fire’s Farron Cousins explains what’s happening.

Out of all the different voting blocks here in the United States over the years, only one has been consistent with which party they overwhelmingly support and that ladies and gentlemen is white evangelicals. White evangelicals, that voting block has always been a consistent Republican stronghold. That is up until about a couple of days ago. You see back in March, these white evangelicals, the people who think they are more religious than anybody, 80% of them said Donald Trump is our guy. That’s the one who’s most like us or most fitting with our religion, either way 80% of them said, yeah, he’s our guy. Two months later, only 65% were willing to say that. This man lost 15% of the white evangelical vote in two months and this was before, by the way, all of these civil unrest and the police brutality that we have seen, and Donald Trump’s ridiculous photo op, where he showed that he doesn’t know how to hold a Bible.

Um, because he’s never held one, folks, and I think evangelicals are gonna lose even more support from after that. But, according to this poll, the reason for the drop in support was because of his response to the pandemic, because these evangelicals do to a degree, thinks that they’re living their best life for Christ. They think they’re the ones following the Bible. They think they’re the ones who care about each other and all of that and care about human life even though they, they really, really don’t. But they saw that Donald Trump does not, and he’s not even pretending to. You know, when we had Republicans calling for us to sacrifice our grandparents, to the coronavirus, just to kickstart the economy that resonated with a lot of people in a bad way, they weren’t happy with it. They didn’t like that thought and that’s why elderly voters are also now going for Joe Biden instead of Donald Trump, because the elderly voters were also a solid Republican group.

And now they’re not. Now I’m not saying the evangelical voters are going to suddenly all become Democrats. They’re, they’re not and to be perfectly honest, we don’t want them, okay. You’re all a bunch of liars and hypocrites. You can stay with the Republicans. They absolutely do fit in with your beliefs. But what is going to happen again is these people are not going to become Democrats. What they’re going to become is non-voters, at least for the year 2020, and that’s, what’s going to hurt Trump the most. That’s his biggest problem this year is not necessarily the flip voters, you know, getting people who voted for Trump 2016 to vote for Biden 2020, what’s going to hurt him is the people who voted for Trump in 2016 and then stayed home in 2020. And that’s what these evangelicals right now are most likely to do. Not a majority of them by any stretch of the imagination, but this 15% that he just lost, they’re not voting for Democrats.

They’re simply not going to vote and that is going to cost him dearly, especially in those Bible belt swing States, that could go either way. A 15% dip in evangelical support in one of those States and suddenly that’s a blue state, easily. And Republicans, as I have repeatedly mentioned, they are freaking out because they are watching the polls. They have people that worked for them, where their job is just to watch and analyze the polls and they see all this and it terrifies them because Trump’s not the only Republican on the ballot this year. No, you have 26 Republican senators, I believe, 24, 26. I forget either way, on the ballot in various States throughout the country. Control of the Senate is up for grabs and Republicans know that if Trump can’t perform at the top of the ticket, then every Republican on that ballot beneath him is in trouble as well.