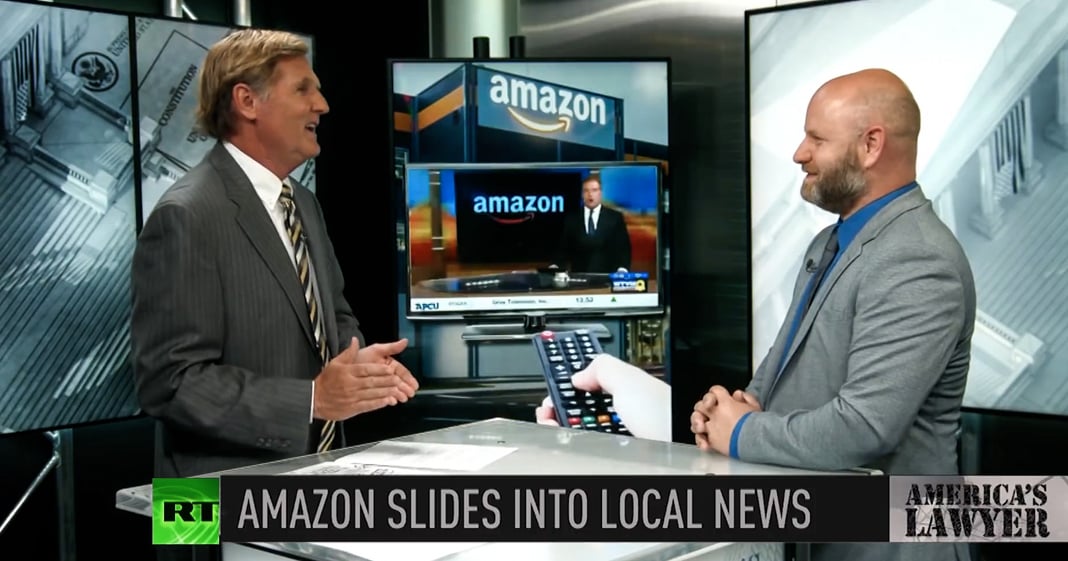 Via America’s Lawyer: Amazon has distributed pre-produced material to local news stations across the country in its latest PR stunt following criticism of its mishandling of employee safety. Mike Papantonio & Farron Cousins discuss.

Mike Papantonio: After facing backlash over safety protocols for its warehouse workers during the pandemic, Amazon’s been supplying news stations across the country with pre-produced material to get the online retailer back in our good graces. Joining me to talk about that is Farron Cousins. Okay. Farron, we’ve seen this happen before. Right? Government used to do this in the 1950s.

Mike Papantonio: They would send out these videos they’re produced by the government. They’re all feel good. Everything’s perfect. Amazon’s doing it now. Amazon, look, this is a company that has a horrendous, horrendous history in the way that they treat their workers, pick it up from there.

Farron Cousins: Yeah. Amazon was facing a ton of backlash because even right before the pandemic, they were engaging in a lot of union busting and that’s when they had kind of crafted their plan, you and I had discussed on this program, we’re going to smear the guy who’s trying to start the union over in Long Island. Then the pandemic broke out and that same person they attempted to smear brought up the fact that we don’t have masks. There are no safety protocols. You’re forcing us to work, you know, right next to shoulder to shoulder, basically. There is no sanitation. The virus is spreading. We’ve seen it spread in warehouses.

Mike Papantonio: That’s the number, the last number I heard.

Farron Cousins: Right, and so they were just saying, do something, clean it up, protect us and that story went international. So Amazon understands, well now we’ve got a real problem and our advertisements that we’re making right now saying, hey, our stores or our, our warehouses are clean. Our workers are happy. That’s not enough. We’ve got to tap into the last outlet that people actually still trust and that’s local news.

Mike Papantonio: You know what I thought about when I saw this story? I mean, these, these boneheads that you’re seeing right here read exactly what was given to them by Amazon.

Mike Papantonio: Word, for word. And what it reminds me of is when Kim Jong-un built a little, a little city, you know, for reporters to come to North Korea, it was like Pleasantville. It was like the Truman Show. Come here, this is how we treat our people. This is, this is an organization that treats humans one step, maybe one step above robots. You know, they don’t have the right to use the bathroom when they want to use, they have to pee in jars if they want to relieve themselves. Their quotas are impossible to keep up. With 600 people, got the virus. That’s the last number I saw. Then after all of that, after they’re paying these people to go in and put their families at risk, put themselves at risk from COVID-19, they take away the extra $2 that they were giving them for that.

Mike Papantonio: So this, this bumpkin, I mean, goes out, they produce a video that these bumpkins say, yeah, this is what Amazon really looks like. It looks like something produced by Kim Jong-un in North Korea. Everything’s beautiful. See how, they have testimonials. They have testimonials from their people.

Farron Cousins: Well, and when you’re the world’s richest man, they let you do it because Jeff Bezos could walk into any one of these local news stations and say, guess what, you all work for me now.

Farron Cousins: And that’s, what’s terrifying too. He already did it with Washington Post.

Farron Cousins: And he could do it with these groups. But here’s the thing, as I mentioned, this is the last group of news outlets that most Americans do trust. They don’t trust the cable news. They don’t trust social media news. But what they do trust is their local news because they think whatever these people say, this is a guy you could run into at the grocery store. You know, these are people, these are your neighbors reporting the news. You trust them.

Mike Papantonio: Sinclair is anything but, you know, it’s all, it’s all prefab news that the, the ownership of Sinclair wants out there. What’s surprising to me about this, this was in one of the, one of the stations, MTVJ owned by NBC. You understand, there’s no question. The producers that give this information clearly know that this is produce, produced by Amazon as a feel good piece. They know Amazon advertises on their station. They know the advertising, the advertising dollars are huge. They don’t even disclose that when they tell the prefab story that Amazon produced for them, which is delusional, you know, completely fantasy story about how well their employees. There’s no disclosure here is there?

Farron Cousins: No, there is not and that’s part of the problem too. And it’s also with the producers, there’s an element of laziness in it too, because they know with each 30 minute program they’ve got 22 minutes they have to fill, 22 minutes. Well, Amazon just gave me four. So now I’m down to 18. That’s all I have to fill now. And they, they don’t disclose. They, they get lazy. They get caught up in this and Amazon is not the only group that has been doing this. As you mentioned, the US government has done this. Other corporations, pharmaceutical companies have done this tremendously.

Farron Cousins: And so it really calls into question. We know, cable news is biased one way or the other, but I think the bias at the local level is far more than anyone understands.

Mike Papantonio: Awful. Farron, thanks for joining me. Okay.