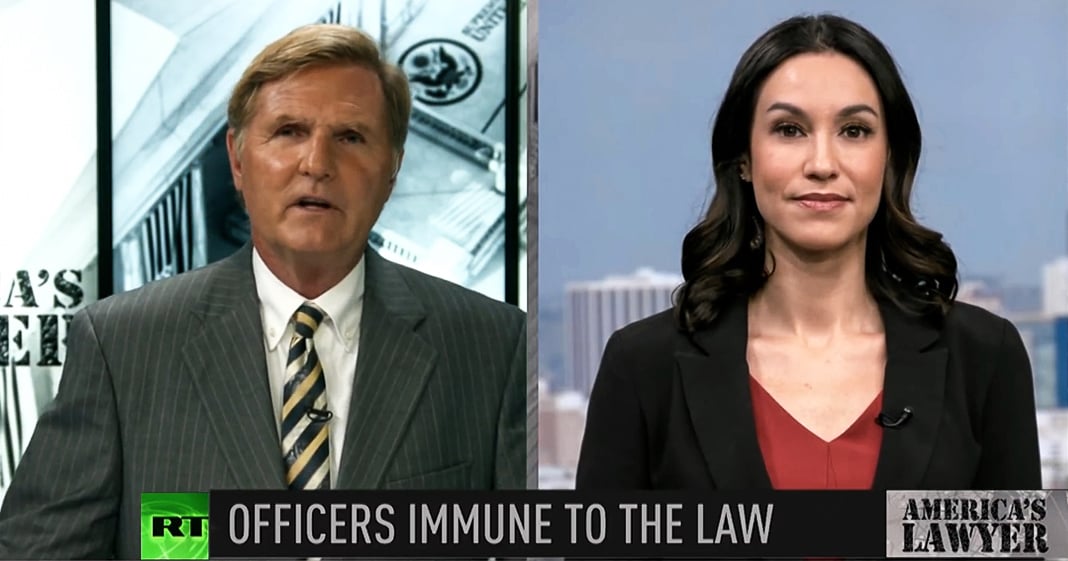 Via America’s Lawyer: The Supreme Court may soon review how police officers use “qualified immunity” to get away with aggressive misconduct on the job. RT correspondent Brigida Santos joins Mike Papantonio to discuss.

Mike Papantonio: The Supreme court might soon revisit whether legal immunity should be granted to police and all types of law enforcement who commit misconduct and who commit even murder on the job. RT’s Brigida Santos is here with me now to talk about that. Brigida, this you’ve been covering these immunity stories one after another. The, you know, the government wants to grant immunity to corporations that pollute, corporations that kill, and they’re doing it. They’re doing it by way of executive order from Trump. Tell me about the legal doctrine that gives police blanket immunity in misconduct cases.

Brigida Santos: Well, it’s called qualified immunity, which is a federal law that shields government officials from being sued for actions that they perform during their official duties. The Supreme Court sided with police decades ago by granting them qualified immunity, unless their behavior violated clearly established laws or constitutional rights. But now it’s undeniable. There are so many police killings of unarmed civilians. They’re often caught on video. Judges and scholars across both political aisles are now starting to question whether police should continue being shielded from nearly all accountability. Supreme Court justices are now reviewing over a dozen cases involving public officials in vocation of qualified immunity, which signals that the high court could soon be ready to change the rules. Now people were expecting to see something on the docket this week, but that has yet to happen. So we’re all watching anxiously.

Mike Papantonio: Yeah. So just to give the viewers have some understanding, this qualified immunity means that if a policeman, a policeman almost has to rise to the occasion of intentional murder. It, even it even exceeds reckless abandon in the way that they conduct their job. You almost have to get to the equivalent of recklessness that might be the same as drinking a fifth of Jack Daniels, and then speeding through a school zone and hitting two children. Maybe you’re going to have, you maybe in court they’re going to be able to get past qualified immunity with that kind of case. But this just keeps, this just keeps feeding itself. I think, I think though, you might see a different Supreme Court analysis. Give, give some examples of cases, Brigida, where police invoked this qualified immunity defense. Just put it in perspective for us.

Brigida Santos: Yeah. Obviously there are way too many to list, but one of the most obvious cases in which qualified immunity should not have applied yet did is came from outside of Dallas where five officers fired 17 shots at a man who was riding a bicycle 100 yards away, after mistaking him for someone else. Well, that man died and the officers got off after invoking qualified immunity, even though their actions clearly violated the constitution. Now, in other cases, we see police shooting unarmed people in convenience stores or deploying tasers until a suspect is dead. So many cases, thousands of them.

Mike Papantonio: Hmm. Yeah. So here’s, so you hear that, you hear some discussion, well you know, you’re not going to sue the police officer anyway, you’re not. You’re going to sue the department who hired and trained the police officer and really blew it. But this qualified immunity as there, is that agent, that the policemen is an agent of that organization, whatever it is and so it flows right over to that organization. This is, this is a big obstacle for people who want to bring some sanity back to the way that, that some, and I got to, let me say this again. It’s not police departments everywhere. Obviously this, the, you know, you see these horrendous stories, it’s always the same, same background. Somebody who was under-trained somebody that on an MMPI personality test would have failed because of their anger issues and somebody who’s just way undereducated to be able to do the job that they’re asked to do. I mean, it’s, it’s always this constellation of the same thing for particular police officers, but it’s not all of them. The point is this, this is a way to reach out to all the police officers though and say, hey, you know what? You almost can do anything you want to. How do courts determine whether an officer should be granted qualified immunity?

Brigida Santos: Well, this is the interesting part. The court typically rules that an officer has qualified immunity after considering whether police used excessive force in violation of the fourth amendment. Now, if the answer is no, of course, they’re going to go ahead and immediately apply qualified immunity and grant that. But if the answer is yes, the court then determines whether the officer should have known that their actions violated the constitution based on whether there’s a legal precedent, establishing that those actions were illegal and if they do establish that the answer is yes, then it will go to trial. But since 2009, the Supreme Court has allowed lower courts to skip the part investigating whether officers knew that they were breaking the law in more than 50% of all cases.

Now, when it comes to the family of George Floyd, they might not see justice because there’s no legal precedent from the eighth circuit court of US, the US court of appeals or the Supreme Court establishing that it’s unconstitutional for an officer to kneel on a handcuffed man’s neck for an extended period of time. And of course, Mike, precedents can’t be established if the courts don’t properly look at these cases, which just creates this vicious cycle, that’s allowing officers to easily kill and hurt civilians with impunity.

Mike Papantonio: Yeah. As amazing as it may sound, they use that, that method of, of detaining, detaining people is used all over the country. It’s training that they get just like the old chokehold that they used to train at. It’s the same thing. Let’s hope some good comes out of this, this disaster of, you know, of what we’re seeing with the Floyd case. I, I can’t help, but feel, first of all, they, they undercharged him. They charged him with third degree murder. I don’t understand that, he should have been charged with first degree murder. Thank you for joining me Brigida, okay.