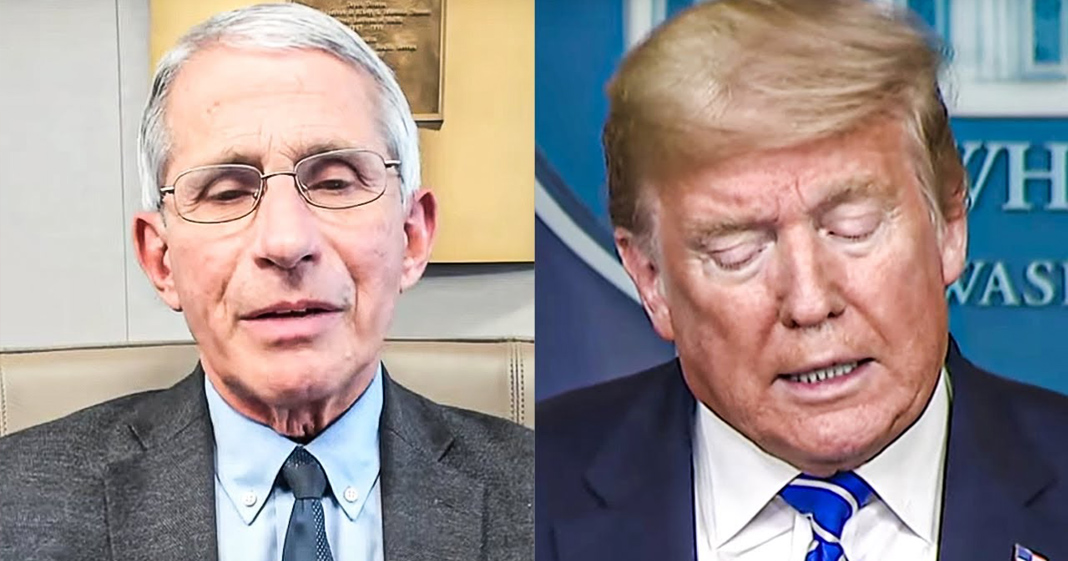 According to Dr. Anthony Fauci, the President has basically stopped talking to the members of the Coronavirus task force, including Fauci himself, in recent weeks. This doesn’t mean that the pandemic is over, it just means that Trump has grown bored of it and has found something new to capture his attention. The U.S. is still reeling from the crisis, and Trump couldn’t care less. Ring of Fire’s Farron Cousins discusses this.

I know it’s been a crazy couple of weeks here actually, but, we also have to remember that in spite of everything that’s going on right now, all the civil unrest, the protest, the murders taking place at the hands of police officers. We’re also still in the middle of a pandemic and Dr. Anthony Fauci on Monday of this week, an interview was posted that he did with stat news and Dr. Anthony Fauci has admitted that no, he’s not talking to Donald Trump anymore, but not because Fauci doesn’t want to, but because Donald Trump apparently stopped talking to him and the entire coronavirus task force a couple of weeks ago. He just stopped caring. He doesn’t meet with him anymore. He’s not getting regular updates from him. He’s just moved on and this actually happened before any of the protests, any of the unrest, the, you know, releasing of the military against US citizens.

This all happened before that. So before any of this, before the news cycle changed, Donald Trump had already stopped caring about the fact that we were losing thousands and thousands of people every single week to COVID-19. Folks, that’s a terrifying thought and I know that we have States opening up my state here, Florida. We’ve been trying to open up a phase one, phase two, whatever the hell phase we’re in now, I don’t know because I’m not foolish or selfish enough to go out there and act like nothing’s happening. Florida is still seeing a rise in the number of cases. Texas, still seeing a rise. Georgia, State’s all over the South, red States particularly are seeing this thing increase. We’re not there yet, but just saying, screw it, I’m bored. I’m tired of being at home. I’m going straight. That doesn’t cut it folks, just because you don’t like the thing and you want it to be gone, doesn’t mean that it’s gone.

But that’s how Donald Trump is acting right now. He thinks that if he just ignores it, that if he doesn’t talk to the coronavirus task force, that it doesn’t exist anymore, but we’re going to be dealing with this for quite some time. And according to people like Dr. Fauci, we might even still be dealing with this into next year. This hasn’t gone away and the more States try to preemptively reopen without having actual safety precautions in place, without having testing, without having tracing the worst it’s going to be in the long run. It sucks. We’re all tired of doing it, but that doesn’t mean that we get to ignore it and pretend like it’s not actually a thing, it is. But the fact that the president has stopped communicating essentially with the coronavirus task force is bad news. This means that if that second wave does hit, which the experts say it will hit, you know, pray that it doesn’t. I hope it doesn’t. I would love for this thing to be gone, but I would love even more for the federal government to be prepared if the second wave hits and of course, to finish off the first wave. But if there is no communication at the federal level, if Donald Trump is not in fact working with this task force, then we’re going to catch ourselves off guard once again, if this thing has a resurgence.