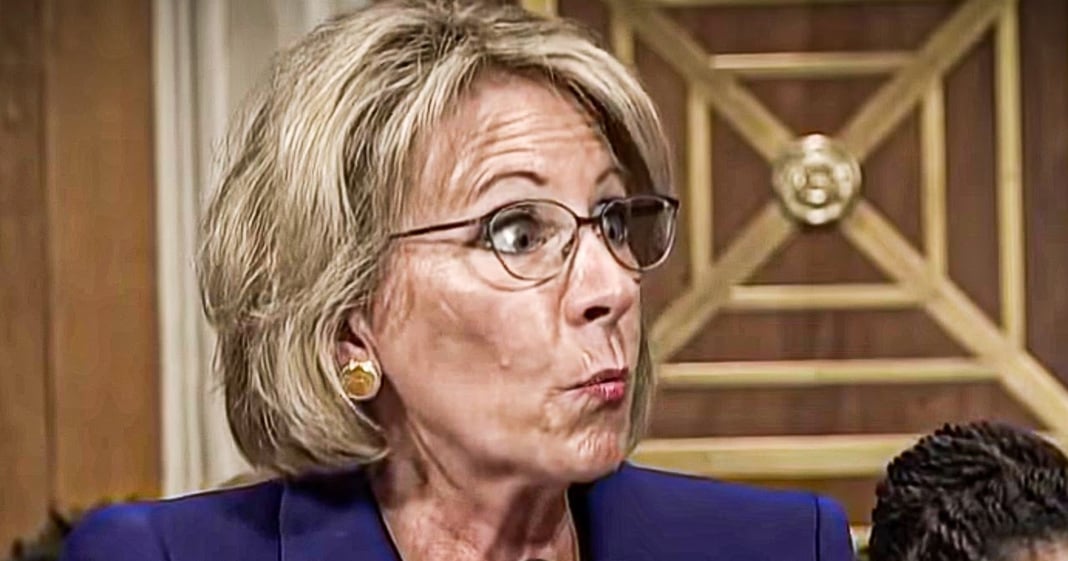 Treasury Secretary Steve Mnuchin and Education Secretary Betsy DeVos are being sued by students who claim that the Trump administration illegally kept their federal tax refunds in order to pay their student loan debts. Most of these students had debt that was past due, but that does not give the administration the authority to seize tax returns in order to pay for it. Ring of Fire’s Farron Cousins explains what’s happening and why no one should be surprised.

Education secretary Betsy DeVos has been sued multiple times by student loan debt holders in the three and a half-ish years that she has been in office. And she is once again this week being sued for essentially the same thing and that is collecting student loans from people that she is legally prohibited from collecting student loans from. Except this time Betsy DeVos is not alone. Her good friend and fellow Trump administration appointee, Steve Mnuchin treasury of the secretary is being sued along with her this time because the two of them were working hand in hand in this latest scheme, whether they knew it or not. Here’s what happened, according to a new class action lawsuit against DeVos and Mnuchin, as part of the CARES act, all involuntary collection on federal student loans was immediately halted until September. This means that no matter what the federal government, if you have a federal student loan that is, you know, in delinquency, they cannot garnish your wages.

They can’t take your tax return money. They can’t do anything to take money away from you during this pandemic because of the CARES act. That is a law until September. After that, all bets are off. But for right now, they’re legally prohibited from doing it. So of course, what are they doing? They’re withholding people’s tax returns. They’re taking people’s tax returns, I think $18 million worth so far, and putting it towards their student loan debt during a pandemic at a time when they are legally forbidden from doing this and they know they’re forbidden. They know they had to get in there and fix this before it happened, but they didn’t do it. So now of course they’re being sued and here’s the problem, folks. People who get money back when they pay taxes are typically the people who need the money back when they pay taxes or when they file taxes. Their student loan accounts are already in delinquency. So these aren’t, you know, people who have all their ducks in a row financially, they are people who are already struggling. People who were probably looking very much forward to that tax return because they clearly needed it.

But Betsy DeVos and Steve Mnuchin, millionaire and billionaire, stole it. They stole it to pay these delinquent student loans that they were forbidden by law from paying. So yes, they deserve to be sued and yes, the plaintiffs are going to prevail on this. The question is when? A case like this could take two to three years before these people get that money back. You know this immediate relief that they were that they were about to get from this tax return is gone and there’s nothing they can do about that. It will be years unless the federal government decides to settle, which they never do. It’ll be years before these people get that money back that they are owed because Betsy DeVos can’t stop breaking the law. She has done this repeatedly. She has been held in contempt of court within the past year for doing this in another case, the Corinthian college cases.

Betsy DeVos has a clear pattern of behavior and a clear pattern of constantly breaking the law. Now, if that was me, if that was you watching this video, you’d be in jail. I’d be in jail if we broke the law this many times. If we got held in contempt of court. But instead, Betsy DeVos gets to keep her position as secretary of education. She is undoubtedly the most evil, most sinister, and by far the most incompetent member of the Trump administration and those are three mantles that it’s very difficult to win when you look at all of the disgusting behavior from everybody in this administration. But DeVos has clearly taken the lead in every single one of those categories. And Steve Mnuchin not far behind her.