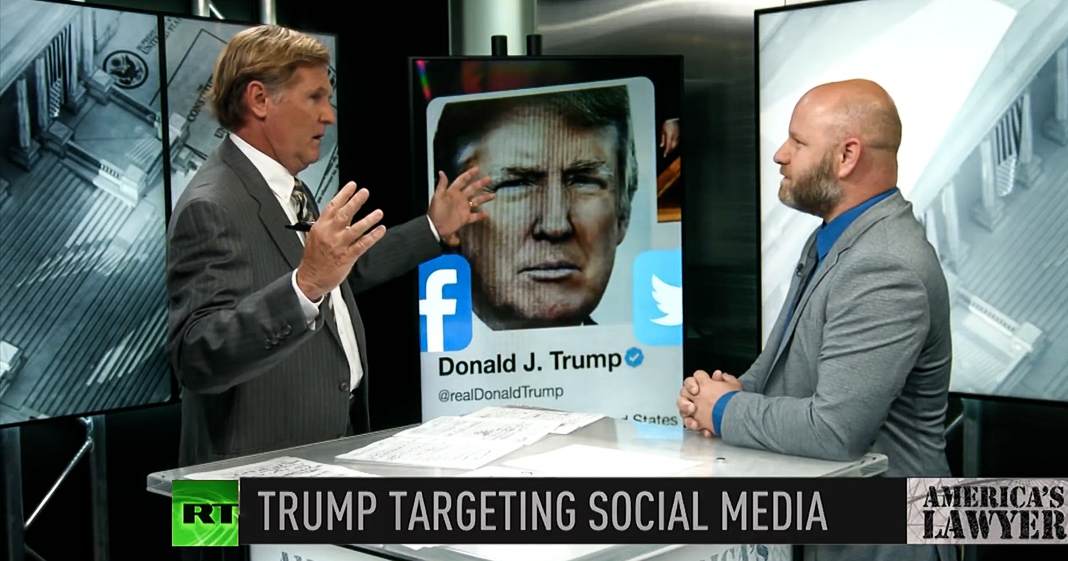 Mike Papantonio: Last week, Donald Trump signed an executive order, allowing citizens to file complaints against social media companies to the FCC. Okay. First of all, from a legal standpoint, this might be DOA, but Trump doesn’t care.

Mike Papantonio: He sees a possibility with the FTC and the FCC, both of them controlled by Republicans, right? So if I’m going, if, if I’m advising Trump on this and I’m one of the lawyers working, I’m saying, you know where social media is, you know where to go after them, it is this. When you had, when you had Twitter be granted their license and they said, yes, we’re going to follow certain rules. The rules are this, the rules are very clear. They have to be an open forum. They have to be fair. They can have no bias. This is what they have to sign into. Now, if I’m going after them, I’m saying the FTC says, you know, what, what you’ve engaged in is unfair practice. You’ve lied to us and if they win there, you know, even though it’s going to go to the courts, social media has got a problem here. This cat, I got to tell you something, you know, I know he thinks that this Jack Dorsey thinks that he’s just this, you know, new Mahatma Gandhi. I mean, he’s, he’s out there thinking I’m going to solve all this. I’m the new Gandhi where it comes to social media, he’s going to kill social media.

Farron Cousins: Well, you know, I’ve got no problem with Dorsey, me personally. I, I think what he did, you know, with Twitter, putting the fact check on Trump’s tweet, which is what sparked all of this, that was overdue, but they need to do it to every politician, not just, you know, the one that everybody loves to hate at the moment. But I’ve never been in favor of social media outlets, you know, de-platforming anybody, right, left anything. That, that is an important part of the conversation and that is what I guess this order is designed to prevent because that has been an issue. But again, now you’re starting to run into problems where we have other groups out there that have said, well, I don’t want to serve or make a cake for these specific people and there’s some similarities there. But I don’t think that there is actual malicious intent necessarily with the social media outlets. Facebook, Zuckerberg has said, he’s going to let it all fly. He doesn’t care.

Mike Papantonio: At last, he’s starting to look like he’s got a brain where it comes to saving social. See, I disagree with you on J on Dorsey. I think Dorsey is he wants to be the poster boy of what he feels is the high ground here. Dorsey is going to become the poster boy of government getting involved in censoring social media. And I tell you, I feel very strongly. The Avenue that I would take is the F is I would, I would use the FTC and I would use that clause, those clauses that they had to sign and I would hold them up for at least two years in court. And I mean, that’s what he’s doing. And I don’t think this wins. I don’t from a legal standpoint.

Mike Papantonio: I don’t think this is a winner. But from a practical standpoint, the way he’s going, I think is effective.

Farron Cousins: Well, I do think Twitter, you know, Facebook, all of those outlets, they’ve got a problem with what’s happening on their, their outlets in terms of the hate. But in terms of the, the fake news, you know, or, and the calls for violence, we’ve seen so many of that that has to be reigned in. You, you can’t just do that, but the, any kind of political statements, even if it’s fake news, even if it’s satire, you have to let that go.

Farron Cousins: You know, we, we hate it. We, we despise it. We try to avoid it, but if we can’t avoid it or we choose to not to, that is our choice and you can’t take that away. So it’s a delicate issue. I do not agree with his executive order and I agree with you that the courts probably aren’t going to agree with it either.

Mike Papantonio: I don’t agree with it either. I’m just, I’m calling balls and strikes.

Farron Cousins: Right, and so.

Mike Papantonio: Jack, Jack Dorsey will be the poster boy for all of this going bad and then everybody else in the social media business is going to be aware that. Hey, thanks for joining me.