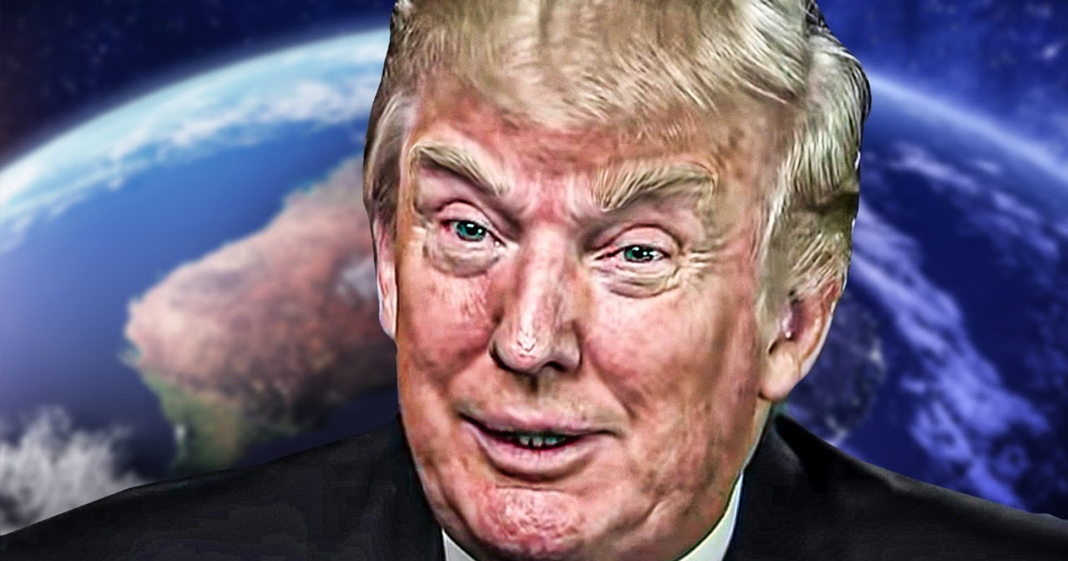 Donald Trump signed an executive order on Thursday that he believes will kickstart the economy, but what it really does is screw over the youngest generation of Americans even harder than they already had been. The order suspends certain environmental laws that are designed to protect endangered species and vulnerable pieces of land, preventing large, multinational corporations from having to seek environmental reviews before they begin projects. This will do nothing to help the economy, as Ring of Fire’s Farron Cousins explains.

Yesterday on Thursday, Donald Trump signed an executive order that will essentially turn our children and grandchildren into sacrificial lambs for the United States economy. Now, for the last few weeks, months maybe, we have heard Republicans talking about the need to maybe go ahead and sacrifice our grandparents, you know, the elderly of society for the sake of restarting the economy, but for Donald Trump, that wasn’t good enough. It’s not good enough to just sacrifice the elderly we may have to sacrifice the children and grandchildren too and that is exactly what this new executive order does because this executive order, which is aimed at restarting the economy, undoes the requirements for environmental reviews. Essentially this is allowing corporations and the federal government itself to go ahead and start building projects. You know, whether it’s new highways, whether it’s a border wall or maybe it’s mining companies that want to blast open new mines, you know, fossil fuel extraction and pipelines running through the country.

You no longer have to analyze environmental data to see how your project is going to impact the environment, which is just a fancy, complicated way of saying you can screw over the future generations by destroying the environment for them, for the sake of allegedly kick-starting the United States economy. But here is the F’d things, folks, these are new projects. Why is the economy in so much trouble right now? Well, first and foremost, because it’s an economy built in straw, built out of straw, excuse me, having a little trouble speaking today, apparently, but it’s an economy built out of straw and the three little pigs analogy that I like to tell so much. We have concentrated all of the wealth up at the top and the bottom the foundation is made out of straw because the workers are getting screwed and no way shape or form do any of these projects that Trump is trying to fast track either his border wall, new highway construction, new mines, none of that is going to change the power structure.

None of that is going to put more permanent dollars into the pockets of American workers. These are all temporary jobs. They’re temporary jobs that are not going to pay very well, so that doesn’t solve anything. But another reason the economy is doing so bad right now, obviously is because of the pandemic. Many businesses have had to shut down. Most of them temporarily. So their workers aren’t getting paid. People aren’t able to buy things as a result. So the economy contracts. So once the pandemic is over and all of these businesses can reopen again, they have to re-hire people again, and the economy will expand and it should do it. If we can get through this pandemic quickly by adhering to social distancing, it would have done it rather quickly and everything would have gone back, you know, relatively normal. Still a fragile economy because we built it incorrectly. But nonetheless people would have jobs. Nowhere in the US is the economy tanking because the federal government’s not letting oil companies build a new oil pipeline or a coal company build a new coal mine, or because the endangered species act is holding up parts of the border wall.

But Trump is doing away with those environmental impact studies anyway, because he says, that’s what the problem is. Bullshit, bullshit. It’s not true. What he is doing is he is using the pandemic as an excuse to greenlight these corporate projects from multibillion dollar corporations and the federal government to do away with environmental reviews so they don’t have to follow the rules. They don’t have to do what they should do. They don’t have to worry about protecting the environment for future generations. So, as I mentioned, this is selling out our children for the sake of restarting the economy and it’s not even you gonna have that effect. This is actually just fulfilling a corporate wishlist that has existed for decades.