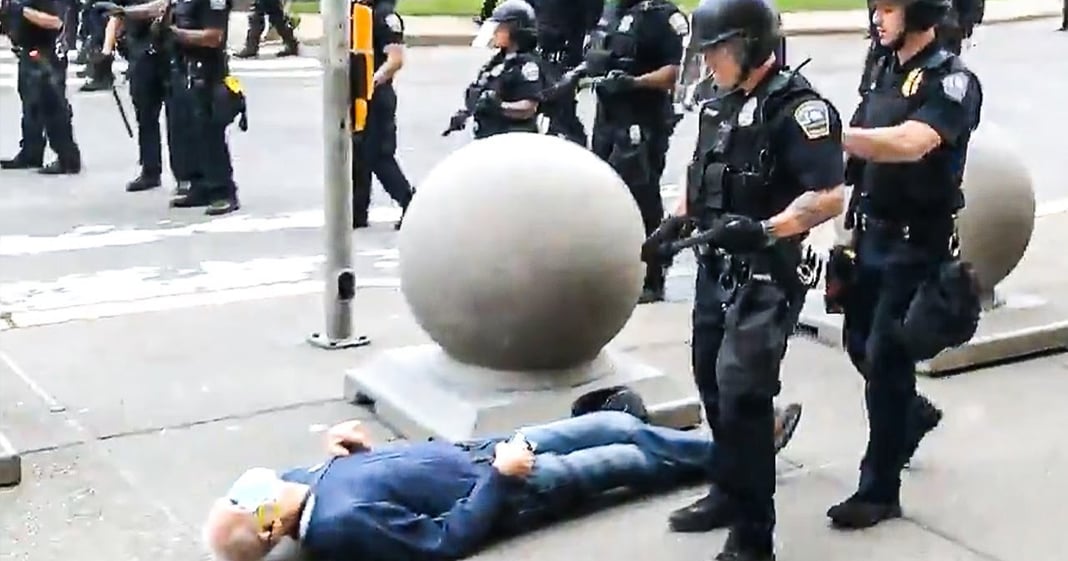 We live in a world where police are the bad guys. That statement has to be said. There is no way to look at the footage from the past week and come to any other conclusion. The latest disturbing piece of evidence came from a video that showed officers in Buffalo, New York shove a 75-year old man to the ground, cracking his skull and leaving him in a pool of blood. One officer stopped and tried to help but was immediately shoved away by other cops and they all kept marching. Ring of Fire’s Farron Cousins discusses this.

Obviously, we have seen lots of footage coming out over the past week of protesters just getting beaten is the only way to say, getting beaten in every different way imaginable by police officers. Many different accounts on Twitter have been phenomenal with documenting this. Jordan Uhl absolutely one of the best, he is kept up with some of this footage. Ben Dixon, doing a great job. Mike Figueredo at the humanist report has actually put together a compilation of this. The ACLU is now filing a lawsuit against many of these police departments for attacking journalists for no reason, you know, people out there with their TV production cameras and crews getting beaten mercilessly by police officers. They know these people are media and they’re just attacking them anyway. Not that it matters if they know their media or not, they shouldn’t be attacking anybody, but they’re doing it because they don’t want people to see what’s happening and by doing that, more people are seeing what’s happening. But here’s a video that popped up late yesterday afternoon. This is officers in Buffalo. Take a look at this. This, this is beyond disturbing here.

Now the reason I wanted to show that particular video is because this is representative of most of the videos we’ve seen. This individual was doing nothing wrong. This was a 75 year old man, an elderly man. You know, that looks like maybe he weighs a hundred pounds, maybe. And that officer that pig, that fascist friggin pig shoves the man down. The next thing we see is the camera’s able to pan over is that the man is sitting there already in a pool of blood at his head. So they’ve, they’ve cracked his skull or caused a brain bleed. That’s, that’s what that means. Those are the two things that have happened there, could have, or they both could have, 75 year old man. This man do not have an update yet, he could be dead by now. I don’t know. But we have seen too much of this. That man was not a threat. That man was not threatening. None of these people have been. The children who’ve been hit with the tear gas, the pepper spray.

But these cops are pigs, folks. If you can watch all of the footage over the last week and not become a radical after this, if you can watch all of the footage over the last week of cops randomly running up to somebody standing and looking the other way on the street and the cop drop kicking them in their back, if you can watch that crap and not become radicalized, then there’s something wrong with you. We’re beyond the point of saying it’s just a few bad apples. Nope, cops are fucking pigs. Fascist little oinkers is what they are. We are living in real time, The Stanford Prison Experiment. That’s what we’re watching. That’s what we’re watching. You give these guys a little bit more authority and you watch what happens. We’ve seen what happens. We’re living through what happens. There’s a few apples in the police force, but not bad ones. At this point, I’m willing to say that the few good ones in this country, they’re the odd people out. Because when you look at this footage, when you see what’s happening, you’re hard pressed to say that most cops aren’t absolute fascist pigs.