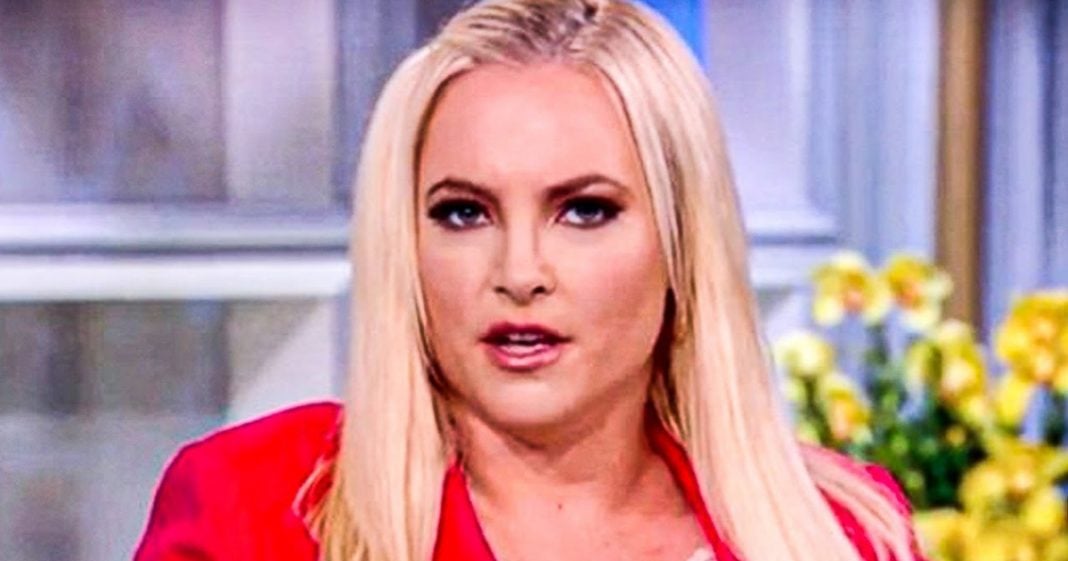 The View co-host Meghan McCain is really, really bad at what she does. Not only is she the weakest and most inconsistent host on The View, but she’s also really bad at lying without getting caught. Earlier this week, McCain said that her neighborhood in New York now looks like a war zone because of the protesters and the “riots,” but her neighbor was quick to jump on Twitter to point out that the neighborhood is perfectly fine. Ring of Fire’s Farron Cousins explains what happened.

Meghan McCain has once again proven that she is in fact, the dumbest person on daytime television here in the United States. Now that is not a mantle, by the way, that is easily won, because she has to fight all of the other daytime talk show hosts, including the, you know, trash talk, the daytime judges and all that crazy ridiculousness. But no, Meghan McCain has absolutely achieved something none of them ever could and that is reaching the bottom of the barrel as quickly as humanly possible. Earlier this week, Meghan McCain sent out a tweet talking about the war zone that her neighborhood in Manhattan had become. Here’s what she said, she said, my neighborhood in Manhattan is eviscerated and looks like a war zone. De Blasio and Cuomo are an utter disgrace. This is not America. Our leaders have abandoned us and continue to let great American cities burn to the ground and be destroyed. I never could’ve fathomed this.

That’s pretty terrifying, right? Her, her neighborhood in Manhattan, in New York City, the big Apple right there, eviscerated it’s a war zone, it’s a war zone. Except for the fact that after that, along came a woman by the name of Kristen Bartlett, who happens to be the head writer for Full Frontal with Samantha Bee, oh, and she also lives in Meghan McCain’s building. And so seeing Meghan’s tweet, Kristen Bartlett decided to retweet it and add this and she said, Meghan, we live in the same building and I just walked outside. It’s fine. That’s it two incredibly short little sentences, but direct and to the point, calling out Meghan McCain for absolutely lying about what’s happening in New York. Now, now don’t get me wrong De Blasio and Cuomo have been absolutely God awful in all this, but not because they’ve allowed protests to go on, but because they’re sitting there lying and protecting the police officers who are beating the living hell out of the peaceful protesters.

But anyway, after getting called out for lying by Bartlett, Meghan McCain sent out two tweets, she labeled them one and two, too. So you wouldn’t get confused. First one, I am six months pregnant because that’s totally relevant to anything happening. I am six months pregnant. A gossip organization is about to run a story of where me and my family are currently. I sent a tweet yesterday based on the news I saw happening in Midtown. We all have been watching all over different media platforms. Nothing in that tweet, which was number one, there’s number two coming up, but nothing in tweet number one made any sense or was relevant to anything anyone said. Like, these were the ranting’s of just a crazy person. Like I’m pregnant, and a gossip organization’s going to run a story about where I am. Okay. Would you, would you like some help? Do you need some new foil for your helmet there? Because this, this is what crazy people say. It’s not relevant to the conversation, but you seem like you might need help.

Meghan, nobody in this country, honestly, except maybe your mom gives a crap about where you are. Nobody, nobody cares about you that much. Nobody’s that big of a fan of Meghan McCain’s to be like, oh, I wonder where she’s hiding. Whoa, I’m going to go get an autograph. No, good God woman, get over yourself. Here’s tweet number two, I support the peaceful protests, their movement, but I’m absolutely heartbroken about the destruction in the city I have loved since I moved to when I was 18. It is important to have your voice heard and I hope everyone stays safe and healthy. All right, here’s the thing you say, you support the peaceful protests. You do not. That is a lie because back in 2016, you said that Colin Kaepernick was disgusting for disrespecting the flag. You repeated that in 2019, and then you also said it again in March of 2020. This has been your consistent opinion that you hate when black people peacefully protest. That’s what you’ve said and because of YouTube and articles written at the time, this is well-documented Meghan. You’re a piece of crap and thanks to Ms. Kristen Bartlett here, we also know that you’re a lying piece of crap.