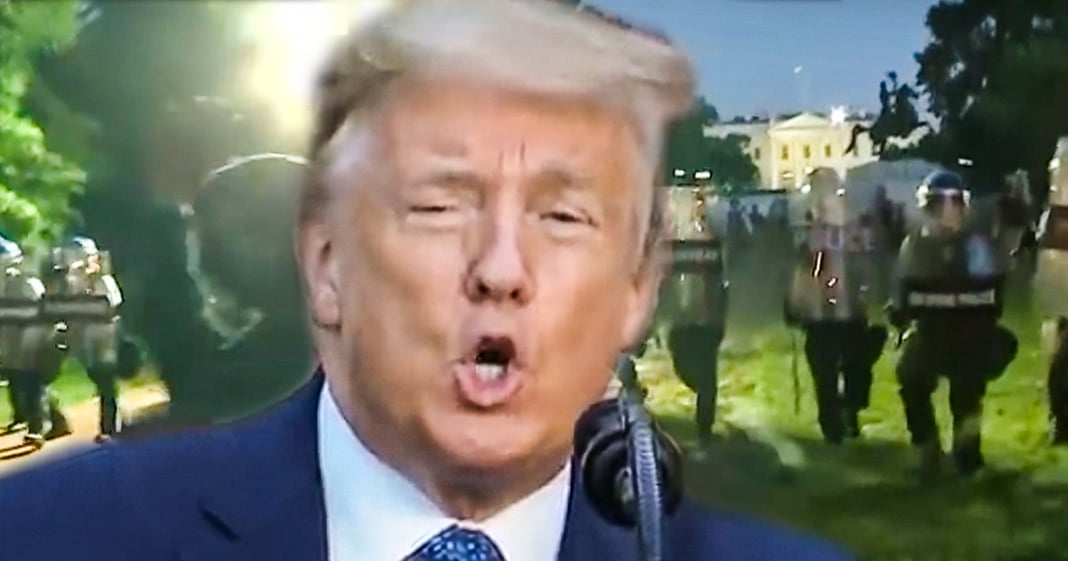 Will Trump ever learn that sometimes you can just be quiet? His decision on Wednesday to claim that he was simply “inspecting” the White House bunker on Friday and definitely NOT cowering down there in fear is a great example of a time when he didn’t have to say anything, but his decision to speak made the situation so much worse. Multiple White House sources have confirmed that the President was “rushed” down to the bunker for his safety, yet Trump insists on lying to everyone about it. Ring of Fire’s Farron Cousins discusses this.

Over the past week, Donald Trump has been widely mocked and ridiculed and criticized for his complete lack of leadership in the past week as the protests had broken out across the country, police violence has escalated and we need a leader. We need somebody out there with some kind of voice, some kind of position of power to help try to make things better. But instead Donald Trump has either ran away and hidden, turned the lights off at the white house, or he has actively tried to make things worse by calling the protesters thugs, insinuating that they’re all somehow involved in riots, or he is flat out, said, I’m going to start sending the military out there to deal with you people. So he’s either running away or he’s making things worse. But according to president Trump, he has never run away.

And on Friday, Friday evening, last week when he was rushed down to the bunker, Donald Trump came out on Wednesday and said, no folks, that thing that everybody knows already happened, in fact didn’t happen. I was never rushed down to that bunker you silly gooses. I just went down there to inspect it a little bit, you know, make sure that if I ever needed it, that it was totally ready to go. It’s just totally a coincidence that it happened at a time when there were those mean scary protesters right outside the white house. Totally not related whatsoever. I was only down there to inspect the bunker. Here is what he said, he said, they said it would be a good time to go down and take a look because maybe sometime you’re going to need it.

You know, yeah, I know there’s lots of people outside protesting, but hey, if you’re not doing anything, you want to go check out this bunker? Oh dude, it’s so cool. You’ve been here for three and a half years. So it’s probably time we show you this, right? Maybe you want to see it. No, I guarantee you that’s like day one stuff for being president. In fact, it’s probably before day one. Like, Obama while he was still president probably took Donald Trump down there and was like, hey, here’s the bunker. This is where you go when things get crazy and the problem here is that Donald Trump obviously doesn’t want to be perceived as weak because he is painfully weak and he doesn’t want people to think that he ran away and hid because no, not this tough macho guy. I mean, if he wasn’t so tough and macho, why would he want tanks rolling through your neighborhood to stop protesters, right? That’s not something a tough guy would want.

And we’ve talked about the overcompensation before, but that is clearly what it is. But nonetheless, he is afraid that people think he is afraid, which just makes him more afraid. But all he had to say was that, hey, listen, yeah, secret service came up to me and said, hey, things are getting dicey. We’re going to put you down here with your family and watch TV in this room instead of this room. That’s all it is. He could have just said that he could have been honest, like, hey, I have no control over it. When the secret service says, get down, I got to get down. You know, their job is to protect me. You know, threats big or small, doesn’t matter, I got to do what they want me to do because they’re the ones who are risking their lives for me. That’s it, man. That was the statement. That’s all you had to say.

Or even better, you could have straight up not said anything. That’s also an option. That’s always an option, but it’s an option Donald Trump never chooses to exercise. He never wants to not say something. This man always has to have the final word and that’s what’s destroying him. His ego won’t let him let things go and every time he tries to cover his ass, it ends up even worse than it was before, because we had all already moved on from the hiding in the bunker thing and now, because he’s sitting there lying to our faces saying, no, I was down there to inspect it. Now you’ve brought it back up. Now you’ll look even crazier than you did before. Instead you had just looked weak. Now you’ll look crazy and weak and we can go ahead and add this onto your ever-growing list of things that you’ve lied about for absolutely no reason. Sometimes Donald, you just got to let things go and not say anything.