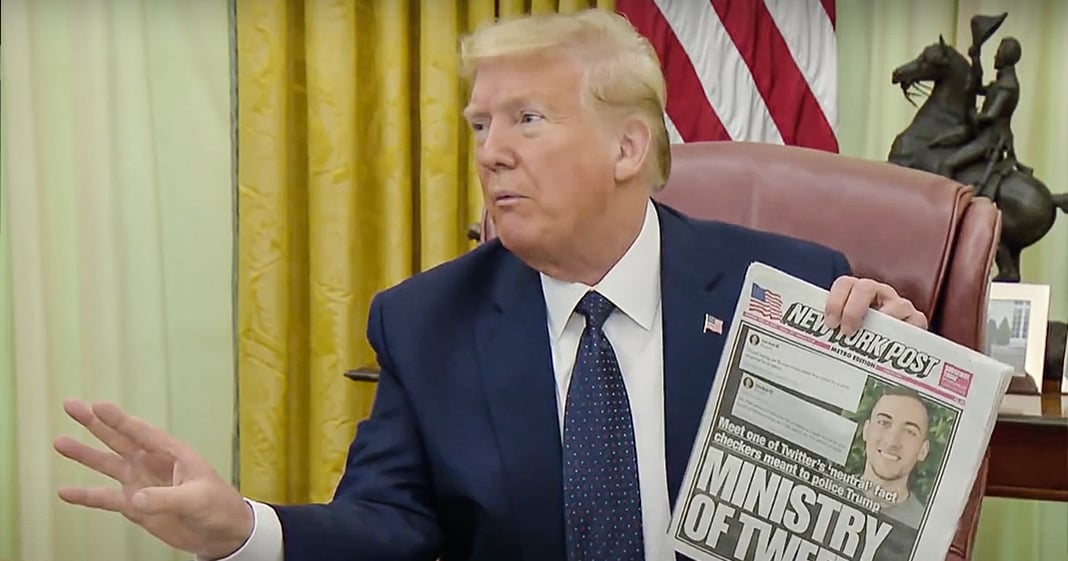 There is no question at all that Donald Trump has failed every single test of leadership since the day he took office, and the past week has been no exception. But where are the leaders on the Democratic side? Where are the Republicans from the House and/or Senate? Why are none of them doing anything? The answer is because those with power in Congress are content to just let the country burn down because they know it doesn’t hurt their election chances. Ring of Fire’s Farron Cousins explains why all the leadership – from both parties – needs to be purged in November.

On Wednesday morning, democratic speaker of the House Nancy Pelosi appeared on MSNBC’s Morning Joe to take a couple of shots at Donald Trump. You know, we had already seen the day before where she mocked his photo op with the Bible by doing her own photo op in her office where she’s actually opened the Bible and she says, you know, oh look at me, I’m doing, this is how you do it, Donald. So we can add that to her ever growing list of just super awesome clap backs. You know, along with greatest hits, such as the sarcastic clap, the paper ripping, you know, those things that really, really, you know, change the direction of this country. We can now add her, looking at the Bible to that too, because that’s super helpful. But anyway, she goes on Morning Joe, Wednesday morning, you know, a good day and a half after the photo op happens after he gassed or, or William Barr, excuse me, had the protesters gassed and she says, what is this? A banana Republic?

It’s literally a line she said. Now, I mean, she’s not wrong. Don’t get me wrong. She’s not wrong, but here’s the problem I have right now and here’s the problem a lot of people have right now. Nancy, it’s great that you’re doing interviews and you’re getting your jabs in at Trump. But other than that, what the hell are you doing? Seriously, what are you doing? We all know the answer. The answer is nothing. You’re not doing anything. You’re still not bringing Congress back. You know, you guys have plenty of things to do. Instead, you’re doing nothing. You’re letting Donald Trump go out there and be crazy, which he is, president Trump is crazy.

But literally the other group of folks in Washington, DC who have authority to call the shots, they’re incompetent. In the Senate side, in the House side, leadership from both parties is absolutely worthless, worthless. Nancy Pelosi is worthless as a leader. Chuck Schumer is worthless as a leader. Mitch McConnell is they all are Kevin McCarthy on the Republican side in the House. They all are. They’re not doing anything. They’re doing nothing. We are not only facing economic collapse. We’re still going through a pandemic. Now we have national unrest because of the obsessive and excessive and deadly use of force by police officers. The president’s out here telling the Pentagon, what kind of tanks do you have that I can run through the cities to scare the protesters. We have black hawk helicopters flying in DC flying low to buzz and scare the protesters. These people are being gassed and Nancy Pelosi’s chilling out in California, eating ice cream, I guess.

I don’t know exactly what she’s doing, but I do know that she’s not doing her job. She is not out there actively trying to make things worse. Yep, she got a photo op. Andrew Cuomo up in New York, said, up here in New York, we actually read the Bible. Really? You don’t strike me as like the church going type. Maybe you are who am I to judge? I honest to God don’t friggin care because that’s totally irrelevant to everything happening in the world forever. I don’t care if you read the Bible every day. I don’t care if you’ve never touched one. What matters right now is that all of you elected officials at both the federal and state level, since Cuomo had to throw himself in here, that you start doing something and that something better not be gassing protesters. I better not be attacking these protesters. It better not be defending these deadly cops who are running over peaceful protesters with their vehicles, like happened in New York.

We need real leaders right now and unfortunately the ones that we have on both sides are either crazy or incompetent and yeah, I understand this is not me trying to say that there’s no difference between Democrats and Republicans. There is, Democrats right now are not calling for martial law or for, or full blown fascist authoritarianism. They’re not, and they never will. Republicans are always going to be a hundred times worse than Democrats, but that does not mean that democratic leadership right now is doing a good job. Okay. There’s a difference between just not being horrible and actually being good and right now that’s where the Democrats stand. They’re in the not horrible part. They’re not good, but they’re not doing things as bad as Republicans, but apparently based on her actions this week, Nancy Pelosi is just fine sitting right there in the middle, not doing anything helpful, but technically not hurting things either.