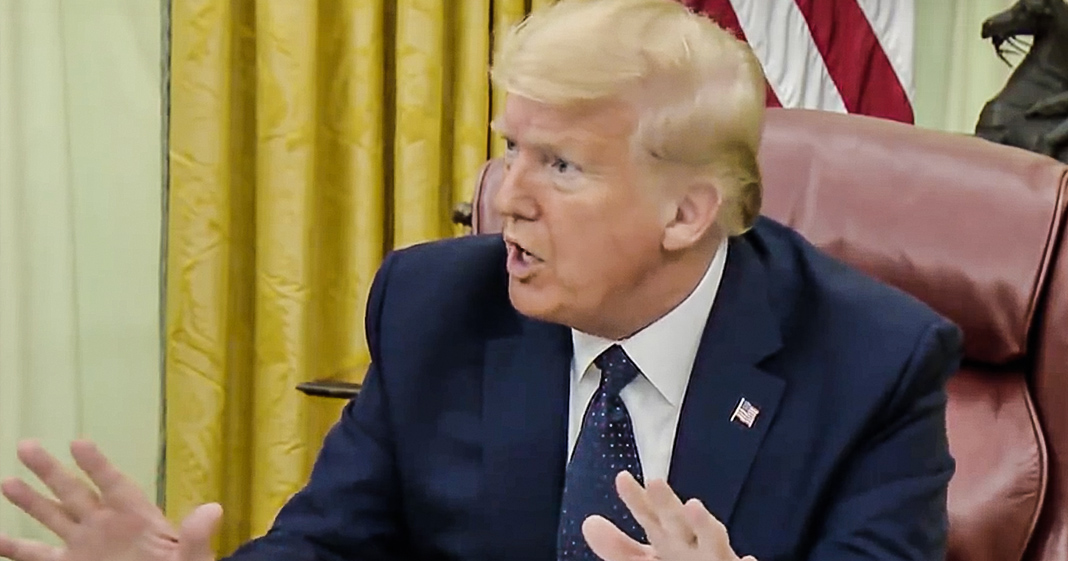 Donald Trump loves to claim that voter fraud is rampant in America, and maybe that’s because he has personally seen it…from himself. Last year, Donald Trump attempted to register to vote in Florida using an out of state address, something that is forbidden by Florida voting laws. The President accidentally committed fraud, but he isn’t going to face any penalties for doing so. Ring of Fire’s Farron Cousins explains what happened.

Donald Trump for pretty much the last few years has been trying to convince Americans that voter fraud was one of the most widespread criminal activities in this entire country. But we found out on Wednesday, that maybe one of the reasons Donald Trump thinks this is because he himself unintentionally committed voter fraud last September. Here’s what happened in September, 2019, Donald Trump tried to register to vote in the state of Florida. The problem is he does not have permanent residency here in the state of Florida and even on his voter registration form, he listed an out of state address. Now, according to Florida voting laws, you have to be a resident of the state and you have to register with a valid Florida address. You know, you can’t just use a PO box. It’s gotta be a real actual place, a residence. Trump registered with an out of state address. That ladies and gentlemen would in fact be something that would be classified as voter fraud.

Now he then resubmitted his application with a Florida address so that he was able to vote in time for the March primary. But here’s the thing, the man who keeps crying and telling us that voter fraud is out there, it’s malicious. These people are doing, he actually did it and he didn’t even know he did it and no he’s not going to get in trouble for it. This isn’t something he needs to be impeached over. This is not something that even needs to be investigated. It was a stupid error done by a stupid man, but he did it. We, we can’t sugar coat that. Donald Trump accidentally committed voter fraud. But here’s the thing, voter laws, state by state are different. That has to change and I know the States are allowed to come up with their own terms, their own rules, their own laws, all of that.

But as long as those rules are different per state, it’s gonna make it harder for somebody to move, register to vote in a different state, you know, when they move things like that, we need some kind of universality. A universal, I don’t know what the word would actually be there, but anyway, a universal set of rules for voting. That way when people don’t take the time to learn what they need to do in the state, well, it’s just the same thing you’ve always done and then maybe people like Donald Trump won’t have to be embarrassed with headlines about how they accidentally committed voter fraud. We need to make it easier to vote, not harder. We need a universal set of rules, not 50 different sets of rules for each individual state. That’s what needs to happen. If we actually want to have any kind of representative government, we have to make sure as many people as possible are able to vote.

And we need politicians, including those at the very top, like Donald Trump to stop pushing myths of widespread voter fraud that doesn’t even exists, no matter how hard you want it to. Trump’s own voter fraud commission could not find evidence of voter fraud. In the 2016 presidential election, there were four instances of voter fraud. Three of them were people who tried to cast two ballots for Donald Trump. The other fourth one was a poll worker down in Miami filling in somebody’s ballot for mayor because that person didn’t vote for mayor. So the poll worker decided they were going to vote for them. No instances of Hillary Clinton receiving any illegal votes, but Donald Trump did in fact receive three and then he himself committed voter fraud in September, 2019. Not intentionally, not maliciously, but voter fraud is not as widespread as Trump wants it to be and we need politicians that are not going to fight making it easier to vote, but instead will adopt a universal set of rules. So everybody knows what to do, how to do it and where to do it and so that we can get as many people as possible to actually go to the polls. At that point, we might actually get real representative government in Washington, DC.