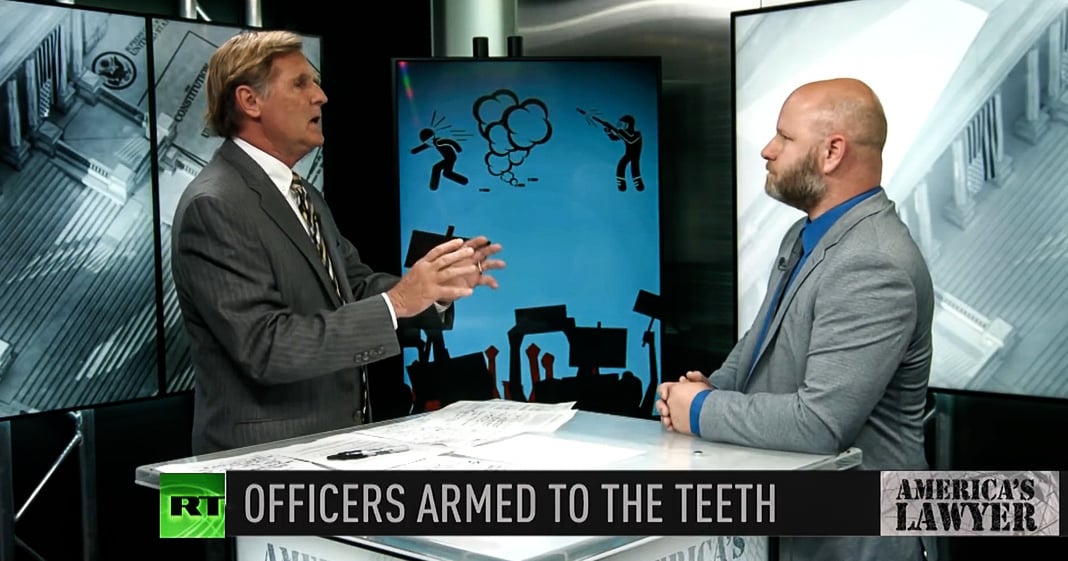 Via America’s Lawyer: Nationwide demonstrations sparked by police brutality against black Americans have resulted in a hodgepodge of mixed messaging and protest tactics. Is the upcoming presidential election a chance to restore some semblance of normalcy? Mike Papantonio & Farron Cousins discuss.

Mike Papantonio: Riots in America, where does it all lead? What does it mean for the next presidential election? I have Farron Cousins with me, we’re going to talk about this. Farron, you know, this is, this is complicated. It’s tough to do in eight minutes to round all this out. But as I was watching a couple of commentaries, the thing that struck me was Rick Perlstein. You and I did, actually we, we interviewed Rick Perlstein my memory is, who wrote Nixonland. And, and as I look at Nixonland, it plays right into what I see happening. What is your take on it?

Farron Cousins: I think there’s a lot of moving parts to this, obviously. You know, we’ve got the, the actions of the police officers, not just the one, you know, who killed George, George Floyd, but what’s been happening since then. The videos of all of that, the videos of people, you know, looting a target, walking out with Lego sets as if that’s important to what’s happening. So there’s a lot of different angles to this. There’s a lot of different sides to it. But I think overall for me personally, the biggest issue is the death of George Floyd, the death of too many African American men and women at the hands of these officers. There’s no justice for them, hardly ever.

Farron Cousins: But this has evolved into so much more than that and I don’t think a lot of that was intentional.

Mike Papantonio: Well it. I don’t think it was.

Mike Papantonio: Yeah, I don’t think it was intentional to put Antifa on the streets. Okay. That’s the first thing, there was no intent there. I have kind of Bill Maher’s opinion about Antifa. You know, you remember several years ago, he was very critical. Kind of describe the whole Antifa movement as privileged white kids going to, you know, going to college, bored for the summer. They dress up in black uniforms. It’s almost like they saw too many hunger game movies and too many star war movies. I kind of agree with him in that analysis of Antifa, but the reason I raised the Rick Perlstein issue is Nixonland to me is it tells the story of what I believe is going to happen here. Right now, Biden is slightly ahead of Trump on the polls. You’re going to see that reverse itself and here’s why. It, Perlstein in Nixonland talked about why did Nixon win in the biggest landslide election in American history?

Why did that happen? And he analyzes it very well. He says, look, it was a combination of people’s fear. They saw the weathermen, they saw the SDS, they saw the Black Panthers in the street. They saw the Vietnam war protest. They were aware of the counter-culture, the left wing counter-cultural that was developing. The drug scene in America. All of these things scared the bejesus out of mom and pop middle America and you know, who showed up at the polls, mom and pop. There weren’t enough votes to balance out the fear factor. Another thing and you, you know, you talk about Roger Ailes a lot, not Roger Ailes, but Lee Atwater. Lee Atwater, who worked with Karl Rove, engineered all that for Nixon. You know, who’s in the white house right now, engineering Trump, Karl Rove.

Farron Cousins: Right, and you know, there, there’s obviously Perlstein is, is phenomenal with that analysis, but you also do have to wonder today, you know, when, when Nixon got elected, because he was running as the law and order guy returned to normalcy guy, Biden has now been the return to normalcy snd that’s what the whole establishment democratic party has been. Let’s get back to normalcy and a lot of people said, yeah, okay. That, I guess that just means a president that doesn’t tweet. So will they look at that now and say, oh, does that mean when we didn’t have a pandemic? When we didn’t have, you know, these, these massive protests happening. So is it going to turn against the incumbent? Because after all, whatever happens when you’re the president kind of falls on you.

So is the public going to blame Trump for this? Or is he going to get things under control? Or is his attempt to get things under control, gonna make things worse? You know, if the military is released here in the United States, that could be a whole different ball game and we’ve seen it before. We saw it happen in the early nineties, when George HW Bush was president. He did activate beyond the national guard. The US army went into Los Angeles when those riots were taking place. Bush didn’t win reelection shortly after that. Was it related? The riots came up in the election, but we don’t know if it played enough of a factor. So there’s so many variables it’s going to be interesting.

Mike Papantonio: I want, I want you to think about what you just said. The criticism of Bush in those riots was, he wasn’t heavy handed enough.

Farron Cousins: Right, and he waited too long.

Mike Papantonio: He waited too long. He was a wimp. That was the whole image, Bush the wimp. Okay. The difference here is the public loses respect for leaders that don’t take action. Let me give you the dichotomy of that. Martin Luther King, incredible leader who understood that nonviolent protest works. Why was he so popular? Why was he so successful? Because the American public, even mom and pop in middle America respected the fact that Martin Luther King was saying, we don’t blow up buildings. We don’t burn down buildings. We don’t shoot policemen in the back of the head. We don’t build, beat up mom and pop store owners because they’re trying to protect their, their business. We don’t do all that. We have protests, but they’re controlled protests. That’s one, that’s one type of leader. The other type of leader and here, I’m talking about the public’s development or, of respect for leadership.

Mike Papantonio: The other side of it, though, this is the ugly side. The public says, okay, heavy handedness is okay if you gain control of everything, that’s what the Perlstein book was about. That’s what Nixonland was about. You had Nixon who was up front saying, I’m not going to tolerate it. It’s just like his speech in the, it’s just like Trump’s speech in the rose garden yesterday, right? I’m going to call in the military, I’m going to gain control of this. Why is he doing these things? Why did he clear out the peaceful protestors in front of the white house? That was a show, Farron.

Mike Papantonio: It was part of the Karl Rove agenda. It’s the Lee Atwater agenda all over. Understand Lee Atwater is the guy who started the Reagan presidential race in Philadelphia, Mississippi, where there is the worst civil rights record in the country.

Mike Papantonio: Because he, it was a dog whistle issue. This is not dog whistle. This is Trump saying, dammit, you know, I’m gonna, you guys are in trouble. I don’t, you know, the Antifa now you’re terrorists. We’ve, we’ve claimed that you’re terrorists. We have, we, we have the military in the, in the streets. So there’s two types of leadership and the interesting and both, at two ends, and the interesting thing is the public respects both kind. Provided both get a good result.

Farron Cousins: But we also have to keep in mind in terms of the protest and the peaceful protest. We had that for years and what that culminated in was Trump going to Alabama and calling Colin Kaepernick an SOB. So they tried the peaceful protest to raise attention to this issue and to be honest, they are still peacefully protesting. They are not the ones going out there and burning buildings and spray painting, and doing all of that. That is a different, animal.

Mike Papantonio: Is the media picking it up though?

Farron Cousins: No, and that’s the problem because the media is feeding into whatever people want to see.

Farron Cousins: And that’s the other issue that we have today that we didn’t necessarily have with Nixon.

Farron Cousins: Right. You have, if you want to tune in and just see video of cops being the worst people on the planet, there is plenty of places to tune in and that’s all you see.

Farron Cousins: If you want to only see people beating each other up, that’s available too. So the, the media is playing a huge role in shaping the perspective.