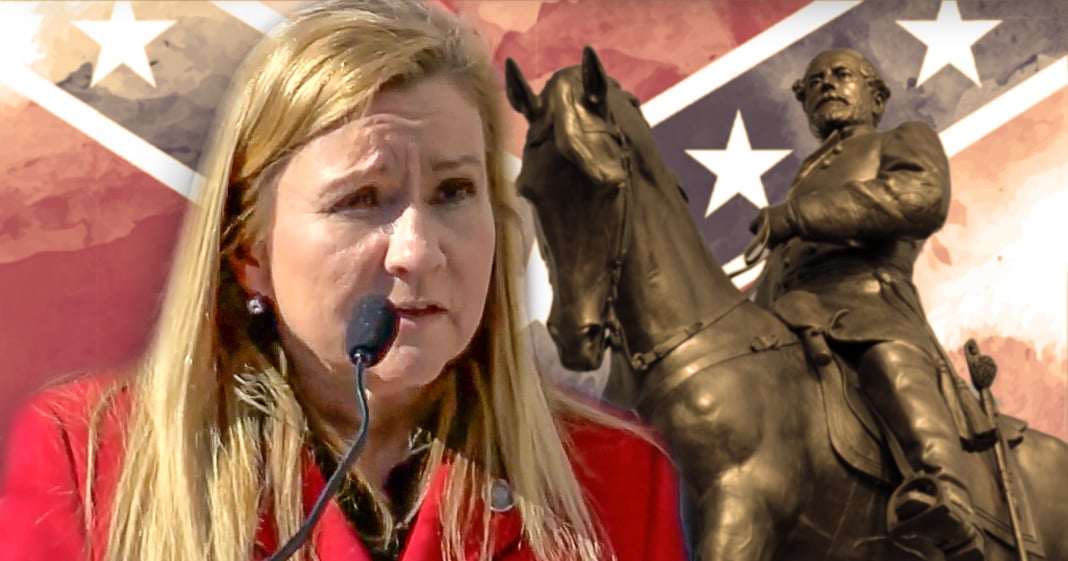 A Republican lawmaker from Virginia is overly emotional about the fact that Democratic Governor Ralph Northam has ordered the removal of a Robert E. Lee statue in the state. The lawmaker, State Senator Amanda Chase, says that doing this will “erase” the history of white people. This isn’t about erasing our history – it is about NOT glorifying it. Ring of Fire’s Farron Cousins discusses this.

A Republican lawmaker from the state of Virginia is terrified that white people might be being erased from American history. Now I know that seems a little hard to believe as pretty much all of American history is about white people and the good and bad things that white people throughout American history have done, but that’s really the bulk of it. But this woman, woman, by the name of Amanda Chase, who is a state Senator in Virginia, believes that the removal of a Robert E. Lee Confederate statue in the state of Virginia is effectively erasing white people and she was so upset about the removal of this monument, that democratic governor Ralph Northam approved, that she went on Facebook live to rant about it, to whine about it, to dang near cry about it. Here is what she had to say, she said, it disturbs me whenever I see people. Let’s be honest, there is an overt effort here to erase all white history.

That’s what they’re looking at doing. Listen, our grandfathers were guilty of slavery and that’s wrong, but that wasn’t all that Lee and others were known for. They did other things, you know, there, there’s, there’s not one human being who has not committed a sin. I’m still waiting for her to tell us what those other things are. You know, she’s like they did lots of things. I mean, plenty of things, those guys, you know, a heck of a bowler that Robert E. Lee was. Really, I mean, you know, he would hit the lanes and just, you know, that maybe, that’s what the statue was about. Who knows, you know, maybe it wasn’t even about slavery. No, listen, Senator Chase, this is about slavery. This is about the preservation of your participation trophies from the civil war. You, you don’t have a right to just keep those.

Why would you want them anyway? Those were put in place to commemorate, to glorify the people who fought against the actual United States because at the time you weren’t a part of the United States. You succeeded, all these Confederate States seceded from the United States and became the Confederacy. You were according to yourselves, a different country at the time. So no, we’re not going to glorify that. We’re not going to glorify your sedition and if you think that we should, then maybe you should reconsider your run for governor in 2021, because that’s what this is all about, folks. Senator Amanda Chase wants to drum up those racist white folk in Virginia so that they vote for her for governor in the next race because she wants to run. So that’s why she’s doing this. That’s why she’s trying to drum up all of this, you know, oh, white people are being erased and that’s the typical talking point we hear from, well, racists.

They believe that white people are being replaced. Oh, excuse me. Did I say replaced? I meant erased, but they usually actually say replaced, right? We’re being replaced. We’re not the majority anymore. We’re going to be the minority. They’re overtaking us. All of those phrases, erased, replaced, overtake, those are buzz words. Those are dog whistle words and they use them because they resonate so well with the racist uneducated base of the Republican party and that is exactly who Senator Chase is playing to right here. She has also been on record as saying she has no sympathy for rape survivors because if they had just carried a gun with them, they wouldn’t have been raped in the first place. Same thing for the equal rights amendment. She doesn’t need it because she carries a gun, she says. Not sure how that logic works, but hey, I’m not one to argue with a crazy person with a gun, which apparently is exactly what Senator Amanda Chase is.