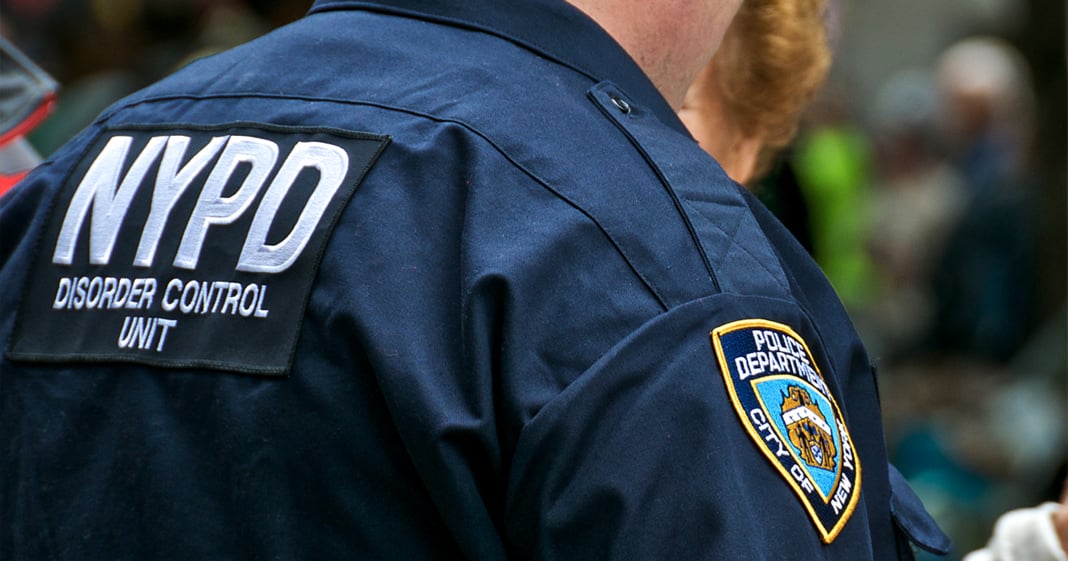 New York police officers have been covering and obscuring their badge numbers during this week’s protest, a direct violation of their own policies. Without these identifying numbers, it is difficult to determine the identity of officers in full riot gear, and protesters may not have the opportunity to report them for misconduct. But that isn’t a side effect, that is the goal of the NYPD, as Ring of Fire’s Farron Cousins explains.

That is their way to commemorate it, the little black armband thing, but around the badge and it just coincidentally happens to be covering up the badge number. It’s not supposed to, but according to some officers who’ve had it cover their badge number, oh, it just kind of stretched out and slipped. That’s a lie. That is an absolute lie and these officers are lazy with their lies. Pictures are emerging of this, but here’s the thing, the reason this is important, the reason we need to see those badge numbers, not only because obviously that’s the rules of the NYPD but it’s because right now we have officers out there literally committing crimes, violating the first amendment rights of these people, beating them senseless, running over them with their vehicles. We need to see their badge numbers. We have had instances of toddlers pepper sprayed. A man has now lost his eyeball after getting hit in the eye with a canister of tear gas.

So yes, people need to be held accountable for this and this isn’t all necessarily happening in New York. But the badge covering up is. This has to stop. We have to be able to identify these police officers, you know, just like they get pissed off about these alleged Antifa people wearing the mask so we can’t see who they are. That’s what happens with these officers. They go out there and full riot gear. They have their helmets on, their face coverings. We can’t identify them by facial markers, but we would be able to identify them if we could get their badge number on camera, on video, whatever it is, but they’re covering that up too. So these are nameless, faceless, unidentifiable militia members at this point and they’re out there enacting their own brand of justice that is not within the guidelines of any police department in this country, but that’s why they’re covering it up.

They do not want accountability. They do not want us to know who they are and they do not want to have to punish their own. It is us against them at this point, folks. They’re doing everything they can to cover their own asses so that, so that they can do this to us. That’s why this is happening because they know the abuse is going to continue and they know they are going to be the abusers and we are going to be the victims. So if you are out there, stay safe, have your cameras out, have your phones out, have everything ready, film, everything, get as many badge numbers as you can. These people are trying to hide and as police officers will be the first to tell ya, only the guilty hide.