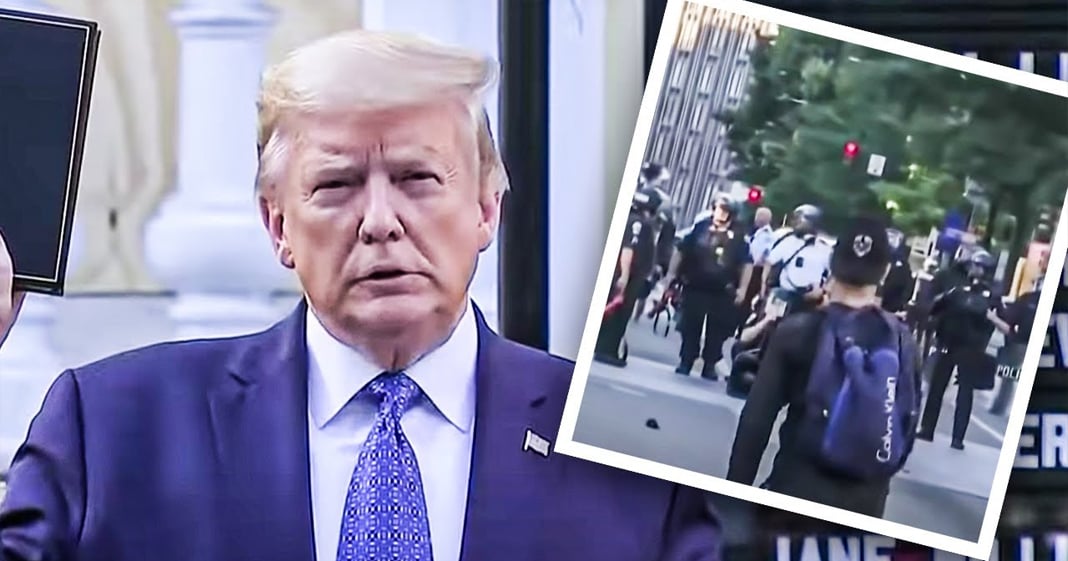 Donald Trump’s ridiculous photo op in front of St. John’s Episcopal Church on Monday evening was far worse than we knew. According to a White House official, the plan was hatched by Hope Hicks, and the entire West Wing was celebrating with glee after the protesters were tear gassed along the path. This is an administration full of sociopaths, as Ring of Fire’s Farron Cousins explains.

More and more information keeps coming out about Donald Trump’s photo op from Monday evening, where he walked over to the St. John’s Episcopal church, held up a Bible as if he’s never held a book in his life. They got some pictures and he got to feel like he was important for a few minutes and obviously before that happened, you had the tear gassing of all of the protesters in the area. These were peaceful people. They were not looting. There were not rioting. They were not yelling, horrible things. They were just gathered in an area where the president did not want them gathered and so they took them out with tear gas so Trump could have a little picture taken with no problem. Well, now we found out that this whole photo op was the brainchild of both Hope Hicks and Ivanka Trump. They were the two geniuses behind the idea to have Trump and many members of the administration, including Ivanka, Jared, Hope, Bill Barr, a couple of the joint chiefs have them all walk over to this church, very awkwardly, hold the Bible like this, get your pictures, and then walk away.

That was their idea. That was their brilliant idea, to help this man’s sagging poll numbers. They thought that was what was going to seal the deal. You know, just seeing this, this weird looking person, oddly holding a book was somehow going to solve all their problems. But in order to do that again, you had to tear gas American citizens, and that’s the problem. Oh, at least one administration official, a senior administration official has chosen to remain nameless, has spoken to the press and said that they are horrified, disgusted and sick to their stomach over the fact that the white house, all these people I just mentioned, all these people came back and were giddy with glee over the fact that things went so well and how perfect it was and how wonderful and amazing it was, ignoring the fact that they just teargassed American citizens.

They didn’t care. All they cared about was that their little plan worked and they were happy and that administration official says it made them sick to their stomach to see these people. What we’re dealing with is an administration filled with sociopaths. People who have no empathy for other human beings, no regard for human life. They just do whatever they can do to further themselves. That is sociopathic behavior and that is what we are seeing from these administration officials. So, yeah, it’s not surprising that if you have empathy, you would be sick to your stomach over these sociopaths celebrating what they did to those people. But that’s what happened. That’s where we’re at with this administration. There is lot more information that has come out about this photo op as well. We will get into that later throughout the day. But right now I think it’s important that we understand that these people don’t care what they’re doing to these protesters.

Not that it justifies it in any way, even if it’s a looter versus just a peaceful protester, but even still these people in DC, the ones who got tear gassed for, to make way for Donald Trump, they weren’t even doing anything. Right? There is absolutely no way to even attempt to justify tear gassing these people. None of them had broken the law. They were all well within their first amendment rights to peaceably assemble without the government telling them no. They weren’t breaking curfew laws. They weren’t breaking any other laws. There was no obscenity or profanity anywhere to be seen. These people did everything right. I have to imagine at this point that the DC police department, as well as the department of justice are going to be hit with a pretty massive lawsuit. It’s very clear these people’s first amendment rights were violated. Very easy to file a lawsuit there. Very tough defendants to go up against. But I think for the sake of the US constitution, that absolutely needs to happen.