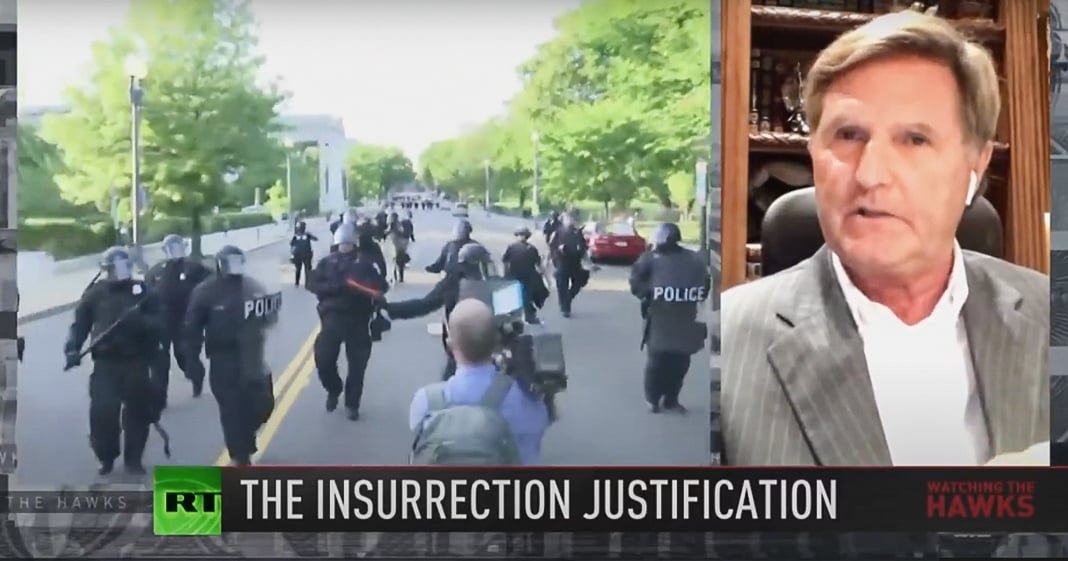 Via Watching The Hawks: In the wake of an eruption of protests across the county against the killing of George Floyd in Minneapolis, Donald Trump has emerged as a tough opponent of the riots and looting that stemmed from it. Will this stance gain him votes? America’s Lawyer Mike Papantonio joins the Watching The Hawks crew to discuss this.

Tyrel Ventura: And joining us now to discuss the many legal ramifications of president Donald Trump’s new zeal to unleash the US military on main street is the host of America’s Lawyer, lawyer Mike Papantonio, Mike, always a pleasure. Thank you for joining us.

Tyrel Ventura: Mike, I want to start by asking you the obvious: Can Donald Trump legally unleash the US military on protesters? Is Posse Comitatus, is that act still valid?

Mike Papantonio: Well, the act is valid, but there’s exceptions to the act. One of them is the, it’s 1807. It was a general purpose kind of element that was used to get around what would the restrictions where. The Posse Comitatus of course is you can’t use military on domestic soil, but here’s what happened. They had to get the Klu Klux Klan under control down South. So they said, we’re going to make some exceptions here. They sent in the federal troops there. That was the first time it was used and then LBJ used it and FDR has used it. George Bush has used it. So absolutely, Trump is going to be able to do what he’s threatening to do. There’s no question. But here, there’s some triggers though, Tyrel. One trigger is, is you have to say, has the governor of a state asked for it? Has the legislature of a state ask that the military brought in, or if they haven’t, is there such unrest that constitutional rights of individuals are at risk and they seem incapable of protecting those constitutional rights?

Then Trump can do that sua sponte. He can send them in and, you know, look Tyrel the bigger picture here, this is, this is all a show. You know, you’ve got the, you’ve got Karl Rove in the, in the white house right now. Karl Rove, you might remember is one of the people that put together the Lee Atwater program for winning the South and winning, winning the presidential election for Ronald Reagan and more importantly, where it came to Lee, comes to Lee Atwater, winning for Nixon in the biggest landslide that the country has ever seen. The, the purpose of what he did and we’re seeing this is, this is a replay completely. There’s a wonderful book out it’s called Nixonland. Nixonland, a guy named Rick Pearlstein wrote Nixonland and he described how Nixon swept the election in ’72. Biggest turnout ever by America’s middle-class, white middle class, labor class showed up because they were terrified.

Ameshia Cross: That was an awesome description, Mike, and I feel like there are so many people that give credit to Donald Trump for being new and innovative and it seems like a lot of his ideas we’ve seen Republicans run the playbook for once again, in previous years. I’m going to switch gears just a little bit and dig in on something else. You know, that many of the right wing pundits and supporters of the president are citing the insurrection act of 1807. How do you think this would be used to justify a military response to the protests and does it actually hold legal weight?

Mike Papantonio: Yeah, it does and we’ve seen it used historically. Here’s the balancing act that’s, that this 1807 issue comes into, it comes into, it comes into this question: Is the, do we have constitutional rights that are being affected by the average citizen where, where we can say that those constitutional rights are being so effected that it trumps, it trumps the right for assembly and the right for free speech. It’s, it’s what we call it’s part of what we call our police powers and right now, if you look at the facts, if, if you had to argue in front of an appellate court, you would be arguing, look, we have policemen being shot. Policeman shot in the back of the head, just the other day. Property on fire, entire cities, basically ablaze, if you follow the media. You’ve got city blocks that look like they’re burning down if you follow the media.

You have bystanders being shot. So the question comes down to this, does the right assent, to assemble, does that, is that stronger than the right for the president to say, look, I don’t care how, I don’t care what the issue is? You have constitutional rights of people that don’t have a dog in this fight that are being affected and because of that, I’m going to send in the military. He has a lot of latitude here, a lot, and as I say, if you follow his playbook, the speech that he gave in the rose garden, go back and take a look at some of the speeches that Richard Nixon gave, where he talked about unrest. He scared the bejesus out of mom and pop. He said, this is going to, we have people marching in the streets. We have a drug culture that’s out of control. We have all of these things that are taking place and if you don’t vote for me, you’re going to have, you’re going to have this nimrod, this liberal nimrod that has to correct all this problem and it, and it worked. It worked, and so I…

Mike Papantonio: I would argue, I would make a State’s right argument. I would say, listen, we have governors and we have legislatures to make those decisions. They’re closer to the issues. They understand the local issues. They understand the nuances of what goes on in the police departments. They understand the nuances of how the public reacts to certain elements of day to day life. So your best argument is to say, how dare you federal government come in here and tell a state that we don’t have the good sense in Minnesota, for example. We don’t have the good sense to gait, to gain control over this problem. We have legislators that have been elected to do that. I’m the governor, I was elected to do that. That is the argument between States rights and the feds. That, that would be the strongest argument to me.

Tyrel Ventura: I think that is a very strong argument. Quickly, I want to also ask you too, we’ve seen tear gas being used quite a bit in the last week. Now, tear gas in a war zone is completely illegal. That’s considered a war crime. How are US police forces being allowed to use something that’s illegal in war, like tear gas, on our citizens left and right, it seems?

Mike Papantonio: Yeah. Unfortunately, unfortunately, tear gas is used all over the world. It’s a big industry. The, it’s the tear gas industry makes gazillions of dollars selling tear gas everywhere from Venezuela to Hong Kong, to the United States and you know what, it’s been explored by the ACLU. The ACLU has brought at least half a dozen lawsuits saying, look, here’s the problem with tear gas. It’s indiscriminate. You know, you, you, what you do is you affect old, young, healthy, unhealthy, you affect people who have a dog in the fight and people who don’t and because of that indiscriminate nature, it’s too dangerous to allow it. That argument has been made at least a half a dozen times in United States by the ACLU and other human rights organizations and it’s lost. It’s been made around the world and it’s lost. Most countries allow tear gas right now, even though it’s a complete contradiction, what you say is correct, you can’t, it’s considered a war crime if you use it in a, in a war setting.

Tyrel Ventura: It’s amazing that we can get away with war crimes on citizens because that argument that you just laid out just seems to keep losing. It absolutely blows my mind. Mike, I want to thank you so much for coming on today and giving us your perspective on these issues that are affecting all of us here in the United States and will affect everyone around the world. Thank you so much, sir.

Mike Papantonio: Thanks for the invitation.