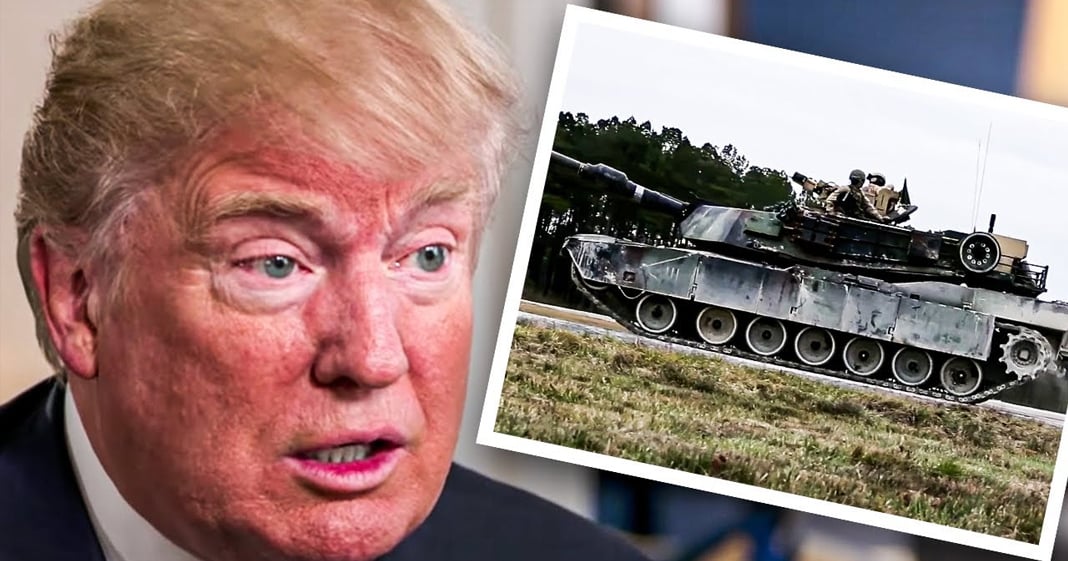 According to reports, Donald Trump asked his staff what kinds of military tanks could be available to use if the situation with protests across the country got to that level. This is the same man who asked if he could nuke a hurricane, so I guess we have to be glad he hasn’t suggested nuking the protesters. Ring of Fire’s Farron Cousins explains what’s happening and how the President could likely make things so much worse.

According to a new report in the daily beast, Donald Trump has been actively asking the Pentagon what kinds of heavy machinery they can get out there on the streets of the United States to intimidate protesters from coast to coast. He specifically at one point asked about armored vehicles, you know, up armored Humvees, tanks and any kind of other armored vehicle that you may have that we can, you know, go out there and display as a show of power, of domination. As Trump likes to say over the last few days, said, we need to dominate these protesters and what better way to do it than with a healthy dose of overcompensation. Because folks, that is exactly what this is. That is why Donald Trump has this obsession with showing off big guns because those are the only big guns that he asked to show off. I mean, this is basic psychology. Like, this is Psych 101 stuff, the overcompensation.

It’s very obvious what Donald Trump is trying to do and as Stormy Daniels once so disgustingly let us know, he probably has a lot of things he’s trying to compensate for. But that’s a discussion for mental health professionals to have, a very unpleasant discussion for them to have. The discussion that you and I need to have right now is the fact that the president of the United States has actively considered sending tanks out to American cities. He is the one, according to this report, not the DOD, the department of defense. He is the one through the white house that is been actively pushing to get military personnel and military equipment out there to squash these protests. That is what this man wants to do because as he says, he wants to dominate. He wants to be seen as the big tough guy, the manly man, and that gets us right back into the overcompensation conversation.

You’re the president of the United States. You allegedly have a couple of billion dollars to your name. What more could you possibly have to compensate for? Right? You got all the power, you got all the money. You just personally don’t have it is all I can come up with. There is real anger in this country because of real injustices in this country and Donald Trump wants to turn it into a dick measuring contest because that’s all he knows how to do. He doesn’t want to address the actual problems. He doesn’t want to take on these killer cops. He doesn’t want to address the fact that we actually have white nationalist groups pretending to be Antifa going out there and committing the violence. Where we’ve actually seen videos of real protesters trying to get the violent to get out of there. No, none of that.

He just wants everybody to see that he’s got a bigger gun than they have and let me ask a question to all those doomsday preppers out there who stock their basements with AR-15s’. What you think your AR-15 is going to do against a tank? You know, you claim that you have all these weapons, because you may have to fight against a tyrannical government someday. What are you going to do? The president has literally thought about rolling a tank down your street. Your AR-15’s going to handle those? Your shotguns, your pistols, any of that? Your glock? The answer is no, because you’ve been lying to yourself all this time. The president’s been lying to you all this time. This is pure and utter chaos being led by a man who’s very terrified of the fact that he has nothing in his pants and that, that’s terrifying to think that his lack of manhood might bring about the end of this country.