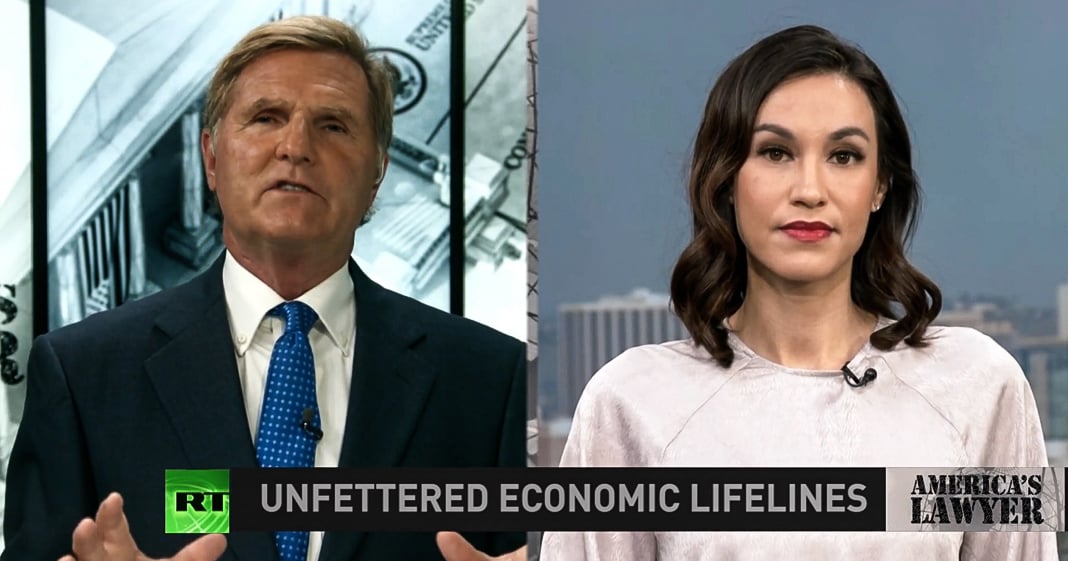 Via America’s Lawyer: Mike Papantonio is joined by RT correspondent Brigida Santoswho warns us about long-term repercussions of sweeping federal deregulation in the name of getting the economy back on track. Also, legal journalist Mollye Barrows joins Mike Papantonio to take a closer look at the Corpus Christi and Pensacola naval base shootings, as both suspects have been linked to terrorism.

Mike Papantonio: President Donald Trump has signed an executive order directing federal agencies to waive and eliminate all regulations that impede economic recovery from the coronavirus and I have Brigida Santos to talk about this story. Brigida, what can you tell me about the corporate friendly order? I, this, this is like over the top. This is, this is why if, if, if we need another president, if we have to get rid of Trump, this is exactly the reason why. Lay this story out for us. Okay.

Brigida Santos: Absolutely. Federal agencies have now been directed to exempt people or entities from any rules that they deem unnecessary on a temporary or permanent basis if they inhibit economic recover, recovery. Now, Mike, early on in the pandemic, you and I covered the covid 19 related deregulations at the EPA, but now these exemptions have been rolled out across all regulatory agencies, potentially giving corporations permission to get away with things that they wouldn’t have been able to get away with before. Now, of course, people want to get back to work and daily life. We’re all concerned about the economy, but throwing regulations out the door absolutely puts public health and safety at risk.

Mike Papantonio: Well, you know, here, here’s the point. I mean, out of all the stories that I’ve done this year so far, when I look at the story that says, okay, this is the story that makes it very clear that we have to get rid of Trump. This is the one I got to tell you. This is the one because this affects consumers. It affects consumer health. It affects the environment. It has the chamber, the US chamber of commerce and wall street, in charge of American politics. This is the reason we need to get rid of Trump. Unfortunately, the dysfunctional DNC hasn’t even given us anybody to work with. I mean, this, this is a sweeping reason why we got to get rid of him, but the character we have that’s supposed to get rid of him just isn’t there. This is important stuff and as I, as I look at it, this seems to be getting worse by the week almost where they’re allowing wall street to do more and more of their ugly little things. The flying monkeys are out off of wall street right now just doing everything they can to take, take advantage of consumers during the covid crisis. What’s your take?

Brigida Santos: Yeah, I think that’s absolutely correct. Now the problem is we want to see evidence, you know. Is there evidence that these regulate, deregulations are going to boost the economy as they’re claiming? Well, when it comes to social distancing rules, you know, there have been worker reductions across federal agencies, so some of the rules actually might need to be relaxed to account for those things like removing tariffs and supply chain barriers that prevent healthcare supplies from getting to the people who need them and allowing doctors to temporarily use their personal phones for telehealth services. But other proposed regulatory cuts require a lot more scrutiny. There is no evidence that allowing the food and drug administration to relax the process for approving vaccines and treatments is going to boost the economy, especially without adequate testing and data on the safety or efficacy of such treatments. You know, it could actually do the opposite and harm the economy if more people get hurt from these things, without that testing. But we do know that when regulatory agencies give free rein to corporations, we tend to see negative effects on public health and safety. The Trump administration has long pushed for sweeping deregulations.

Mike Papantonio: Yeah, and we know this. Wall street’s, wall street’s meeting with Trump regularly, the US chamber of commerce is meeting with Trump regularly and they’re saying, look, we want to take all the things we’ve accomplished in the past with Obama and Clinton and Bush and we now we want to put all those great accomplishments on steroids. I would love to say that there’s a huge difference between the parties and how they regard this type of deregulation issue and how they regard wall street. But there really isn’t and I gotta tell ya, this is what I do for living. I try cases against corporate America and both, both parties have been so active in taking away consumer rights, but this is over the top. This is absolutely over the top because they’re saying this to wall street. They’re saying it to health, to the health industry. They’re saying it to the environmental industry. Do what you want to do. Just, just do whatever you want to do and no matter how sweeping it is, do what you want to do and everything’s going to be okay. Did I overstate that? Isn’t that what this legislation really is geared towards?

Brigida Santos: No, that’s exactly correct. And as you’ve said, you know, sure, the Democrats may be a little bit better, but overall we do have a corporate party. Both parties are the corporate party and at the end of the day, they do tend to agree on letting corporations get away with things that harm the public.

Mike Papantonio: As we look at this, the deregulations are supposed to boost economic activity and growth. Okay. So where, where’s the first thing they’re going to start re really deregulating. They’re going to start with environment, then they’re going to go to health, the health arenas. Then they’re going to go to wall street. Oh, the SEC needs to really back down because it’s going to interfere with the advancement of our economy. It’s going to touch all of us, and the only thing we can hope for is that the Democrats show that maybe they are a little bit different from Republicans and actually step up to the plate and stop this whole thing. Brigida, thank you for joining me. Okay.

Mike Papantonio: Last week, a gunman attempted to drive into a Texas Naval air base, but was stopped by a sailor who was wounded at the scene. The FBI is now investigating this as an act of terrorism and has also released details about last year’s Pensacola air base shooting. It’s all been linked to terrorism. I’ve got a legal analyst, Mollye Barrows with me to talk about it. This story is troubling on so many levels.

Mike Papantonio: Lay it out for us, okay.

Mollye Barrows: All right, so this is the latest shooting happened last week in Texas, Corpus Christi, NAS, Naval air station Corpus Christi and a man from Corpus Christi. His name is Adam Alsahli, and he basically tried to ran, run through the gate. He had a car, he drove through. He shot a security guard that was there, a woman, and she managed to roll over and hit a switch that basically brought the barrier down. So it kept him from getting onto the base and perhaps causing more damage and then he in turn, was shot and killed by security. So the FBI isn’t giving a lot of details about it, Pap, but they are saying they’re investigating it as terrorism related. Similar to what we saw at NAS Pensacola, in December.

Mike Papantonio: Because we have friends that work there.

Mike Papantonio: That train, they’re pilots who train. Question one, isn’t it absurd that we’re training training pilots for the Royal family of Saudi Arabia to begin with? Okay.

Mollye Barrows: Right. Because that was the shooter in that particular, a member of the Royal Saudi air force.

Mike Papantonio: That, that was the shooter, exactly. Came up through the ranks and, but we’re doing it because McDonnell Douglas wants us to, because Boeing wants us to, because they’re selling them this equipment and then we have to train the pilots. In NAS injured eight people.

Mike Papantonio: Direct, direct to terrorism. You know, here’s the other part of the story. I don’t know if, we haven’t talked about this.

Mike Papantonio: Okay. They, they finally got the phone from the terrorists that killed these people in Pensacola.

Mike Papantonio: Tim Cook comes out and says, we can’t help you CIA or FBI unravel what’s in that phone. As if they are, as if they were taking some, some, some high ground. He’s a fraud. Apple’s a fraud. Tim Cook is a fraud. They had more information in that phone that’s, that’s already saving lives no doubt.

Mollye Barrows: So they have this, you know.

Mollye Barrows: Absolutely whatever they need to do. But in this particular situation, it’s also bringing up the fact that our own government immigration vetting failed because Alshamrani, the shooter at NAS Pensacola, he came over. He was, the evidence that they gathered from the phones that they had to hack themselves because Apple wouldn’t go and hack it for them. That basically they found that he had been radicalized as far back as 2015. So he was allowed to come in already having been radicalized. So in one respect our own government vetting, you know, immigration vetting needs to do a better job as well. But when it comes to gathering this evidence, this has been an ongoing battle with Apple for years. It comes up all the way to 2016.

Mollye Barrows: Yeah, 2015, he was radicalized.

Mike Papantonio: Killings in Texas, they go to Apple, they say, we think this phone can help us figure out who other terrorists are. Tim Cook under the leadership of this idiot says, no, we can’t do that. But at the same time, Tim Cook puts all of our information out there.

Mollye Barrows: Will sell it.

Mike Papantonio: He’ll sell it, make it available. But he has the audacity, he’s a damn fraud and this is a disgusting story, especially when it hits so close to home and you realize those people that gave, I mean, you know, you had an officer lost his life in the line of duty here.

Mike Papantonio: Everybody involved in that story was doing the right thing and all we want to know is what’s on the phone. Tim Cook says, no, we can’t let you know. That’s Apple.

Mollye Barrows: Right and there was a case in 2016 in San Bernardino, which was another terrorism related case and it was actually going to court before the FBI or the department justice managed to get access to this particular terrorist’s phone. And so again, that case was dropped, but they were almost to the point where that, I guess they were gonna allow the court to decide the issue of how much access the government had to phones. But you’re exactly right. And so Tim would say that he’s the victim in that regard.