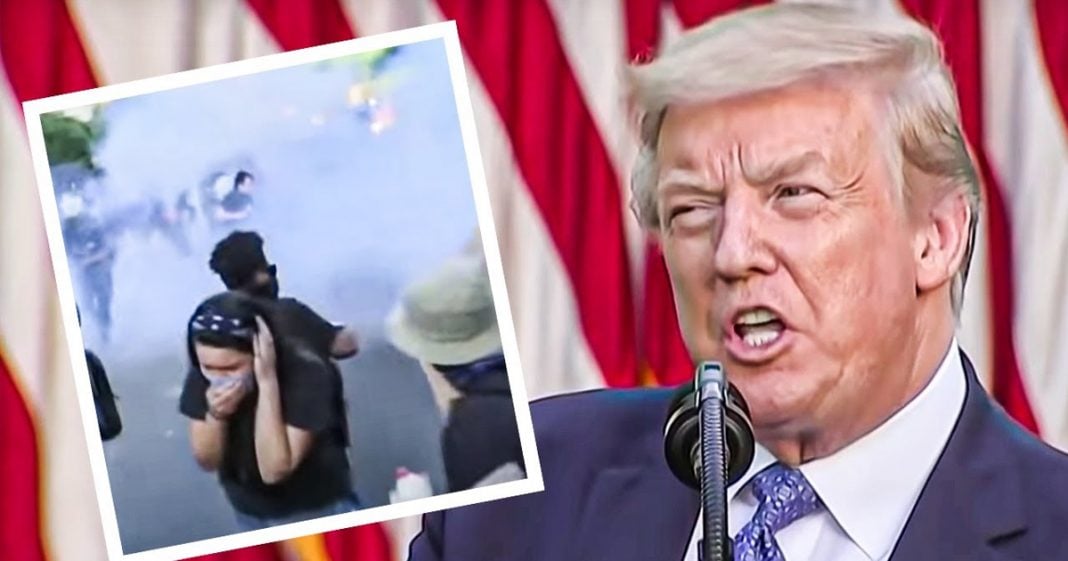 Donald Trump’s order on Monday sounded an awful lot like martial law. The President declared that he would be sending “thousands of heavily armed” members of the armed forces to cities to stop the riots, but the so-called riots are only a small part of what’s actually happening. The real rioting is coming from police officers using their weapons against Americans, which is exactly what happened as Trump was declaring martial law. Ring of Fire’s Farron Cousins discusses this.

Yesterday in the rose garden, Donald Trump essentially declared martial law here in the United States when he announced that he would be sending thousands of “heavily armed” members of the United States military to cities across the country to deal with what Donald Trump describes as the looters and the rioters all over the country. Now, for those paying attention, the looters and the rioters, yes, they are out there and they’re a very small part, small percentage of the people that are actually out there. Most of the folks throughout the United States engaging in these protests, they’re not Antifa. They’re just average people who are sick and tired of watching black people get murdered by police officers. That’s what’s happening. Anybody who tries to sell you a different narrative is trying to do so because they’re afraid of what’s happening. Not because they think they’re going to get looted or, you know, attacked, but because they fear change to the power structures as does Donald Trump.

And that is why he decided to go ahead and send the military out there to enact their own brand of justice on United States citizens. Now he said that he was considering using the 1807 insurrection act to do this. Unfortunately, the 1807 insurrection act does not give him the authority to do this. If a state governor were to ask him to send in the military, he would then be able to do it. He does not have the blanket authority to just say, I’m sending in the military. He also in his little speech called on state governors to enact their national guards. So that way we can have more military presence in these cities. But while he was saying this, something else was happening right outside the white house, actually, and that was a group of peaceful protesters. There were no looters, no rioters, no, no violence at all with these people.

Instead of being told to relocate by DC police officers, because they were in the way of a photo op Donald Trump was about to do, they were tear gassed. It wasn’t curfew. They had every right under the constitution of the United States to be peaceably assembled right there where they were. They were not impeding traffic. They were not impeding business. They were not causing a scene. They were not causing a riot. There was no insurrection. There was no violence as I had said, they were sitting there peaceably and they were tear gassed by police to just clear them out. No laws were broken until of course the police officers showed up. That’s a violation of the first amendment rights of those people. So that’s a law that the police broke and they tear gassed them, which according to international law is a war crime. Because we’re not allowed to go overseas in war crime, excuse me, tear gas Al-Qaida because that would be a war crime.

But it’s totally cool to do it to our own people here because we adhere to different standards than what the international community says is torture or chemical warfare. But we’re just fine doing it to our own people. Just like we’re perfectly fine sending members of the military out to cities and States across this country so that they can be the ones to enforce what? What are they going to be enforcing? What does Trump’s order actually do? That’s something that unfortunately we’re going to have to wait and see how this thing plays out to really find out. Whatever it is, it’s not going to be good because the first time we see one of these members of the military hurt, harm, murder, somebody else, this thing is going to go from a 10 to a 20 real quick. But knowing how this administration operates, knowing how these police forces operate based on what we have already seen, and if you haven’t already, by the way, check out the humanist report.

Mike Figueredo put together a video compilation of all that we have so far of the police on protestor violence, all of the violent acts that the police have perpetrated against the protestors. Go check it out. The humanist report on YouTube. He did a phenomenal job with that. But nevertheless, that’s about to get worse because the president of the United States is now sending the United States military out there to do the same thing. He’s doing it illegally. The 1807 insurrection act does not give him the actual authority to do this. First amendment rights are being violated, left and right across this country. But if you listen to conservative media, conservative politicians, everyone out there in this country is a looting rioting criminal that needs to be reigned in. That is a small fraction of the people out there and if you’re focusing on that message, then you’re missing the entire point of what’s actually happening in this country right now.