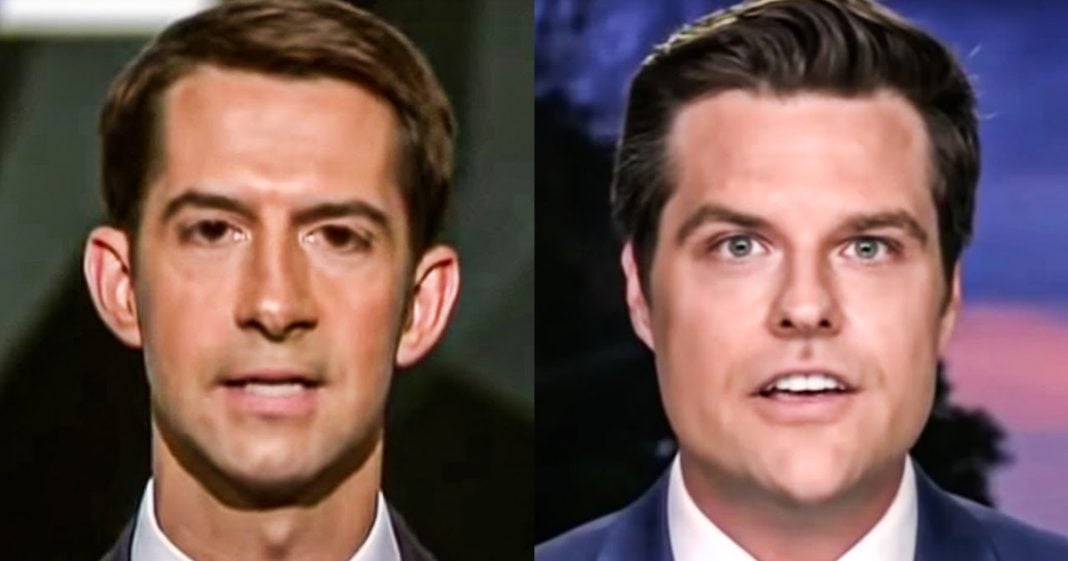 Republican Senator Tom Cotton suggested that the United States military should launch strikes against American cities if the protests didn’t come to an end within a few hours. Cotton, who served in the military, threatened to bring the fury of the “101st Airborne Division” against protesters, even though he has absolutely no authority to do this at all. Cotton is trying to play tough guy for his constituents, but no one could mistake Tom Cotton for being a stand up guy. Ring of Fire’s Farron Cousins discusses this.

Yesterday, several Republican members of Congress decided to go ahead and preemptively show their support for Donald Trump’s plan of sending the United States military out to, I guess, handle American citizens who are protesting. First, it was Republican Senator Tom Cotton, who tweeted the following. He said, quote, anarchy, rioting, and looting needs to end tonight. If local law enforcement is overwhelmed and needs backup, let’s see how tough these Antifa terrorists are when they’re facing off with the 101st airborne division. We need to have zero tolerance for this destruction. Right? Zero tolerance, by the way, for what looting a nameless faceless corporation that has billions of dollars in profits every year. And so, because of that destruction, we’re going to carpet bomb the hell out of Minneapolis. What the hell are you thinking, Tom Cotton? Send in the air force. What are going to drone strike these people? You’re insane. You’re insane.

You are insane, and I could sit here for another 20 minutes just repeating that line over and over again and I still don’t think that would be enough. Tom Cotton is a crazy person. Tom Cotton needs to be put under forcible psychological evaluation and removed from the general population of the United States to protect himself and others. He just called for a military strike against United States citizens and if you don’t think that that’s a serious issue, then you need to study up on US law because that’s what this man just did. He should be removed from office immediately and never once again in his life allowed to have any kind of power or access to any weapons of any kind, but not to be out done. Right? Because Tom Cotton, isn’t the only crazy psychopath on the Republican side, we also have Republican representative Matt Gaetz. Matt Gaetz tweeted out the following, but you actually, you had to click on a warning because Twitter effectively had to sensor Matt Gaetz tweets because of how horrific it was. This is what it was. He said, now that we clearly see Antifa as terrorists, can we hunt them down like we do those in the Middle East.

So yes, in addition to calling for, you know, military strikes, murders, murder, straight up fucking murders of United States, citizens, Matt Gaetz got to throw in a little bit of, you know, Middle Eastern racism. Right? These two men are dangerous psychopaths. There, there’s no dancing around that issue and I’m not going to shy away from saying that. These tweets are proof and if you want to come after me for saying that, these tweets are also going to be exhibit A, by the way. These men need to undergo psychological evaluation. As do I think at this point, anyone who supports these men. I live in Matt Gaetz’s district and I can tell you, there’s probably a lot of people around here that 100% agree with what he said, because it’s a sickness. It is a sickness that infects this district. It’s a sickness that I am doing my best to get the hell away from. It’s a place I’ve lived my whole life. I can’t stand it because of people like Matt Gaetz. Because if you think he’s bad as a representative, imagine running into 20 of him every time you go to the grocery store. Imagine having to be stuck in elevators with little Matt Gaetz’s every time you go in and out of your office.

Because that’s what life is like down here, folks. Gaetz is not an anomaly and I’m sure the Tom Cotton in Arkansas isn’t either because we’ve seen what Arkansas gives us on the national level and none of it’s been pretty. But these men are dangerous. These men are calling for the murder of United States citizens. I don’t care what the citizens are out there doing, taking, you know, petty theft. We have never instituted the death penalty for petty theft in the United States and we sure as hell wouldn’t Institute death by missile for taking a TV out of a target. Yet, that is exactly what Tom Cotton has called for and Matt Gaetz is right behind him saying, let’s just drone strike. Go out there, fire all the bullets we have to kill these so-called Antifa rioters. These are the words of true psychopaths and unfortunately these Republican psychopaths have a lot of power right now.