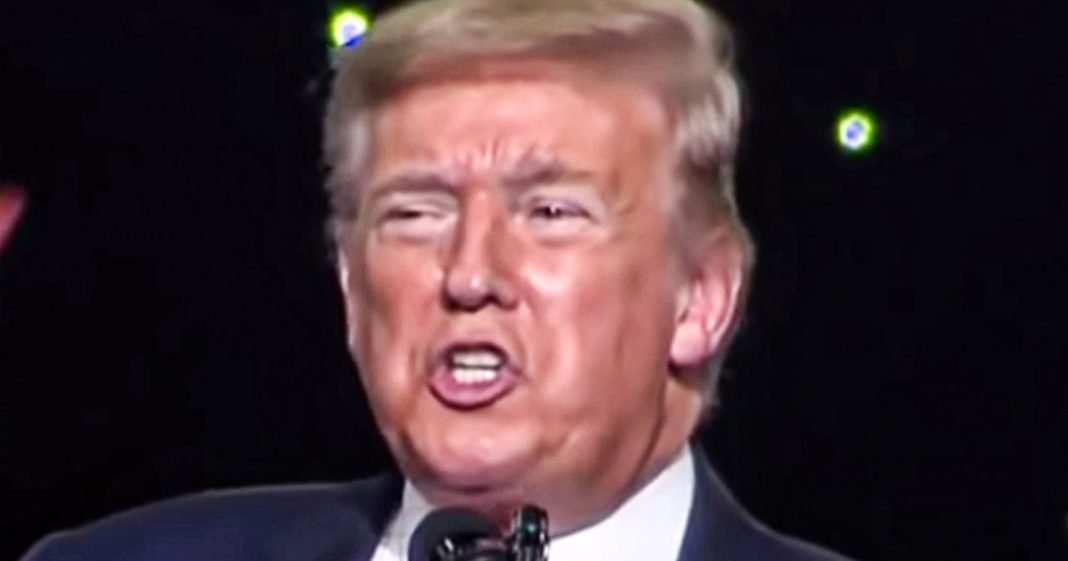 Donald Trump let mayors across the country have it on Monday during a conference call, where he told them that they were “weak” and that they are “fools” for not being tougher on protesters. This, of course, is coming from the same man who hid in a bunker and turned off all the lights at the White House because he was so afraid of these protesters. He has no room to talk tough, as Ring of Fire’s Farron Cousins explains.

So yesterday before Donald Trump declared martial law here in the United States, earlier in the day he actually had call with mayors. Wanted to, you know, tell them really how to get tough against the protesters in their city. But of course not before he called them weak, jerks and fools throughout the duration of that phone call. And he also said that you’re weak, you’re fools, you’re jerks because you’re not “dominating” the protestors. All throughout that phone call Donald Trump had, he kept using the word dominate. You got to dominate them, dominate, dominate, dominate, because you have to be dominant. And then in his little rose garden press conference yesterday, he used that word again, dominate, dominate. That’s all the man’s been talking about. You’ve got to dominate. And this is coming from, by the way, the guy who for the last several days at the white house has turned the lights off and hidden in the bunker.

You know, because he’s scared because he doesn’t want people to think he’s home. And then before he could do his little photo op at the church yesterday he had the protesters tear gassed. So they’d get out of the way. So that’s a huge constitutional violation right there. It’s actually a violation of international law as well as tear gas is in fact banned as a chemical weapon. But nevertheless, Donald Trump, the man who’s hiding away from all of this is out there telling these mayors that they’re weak because they’re not going out there and using enough force against the protesters because that’s what Donald Trump wants to see. He wants to see more bodies on the news. He wants to see more videos of cop cars plowing through protesters. He wants to see more videos of cops driving by and pepper spraying through their car window.

Does he want to see more videos of toddlers getting pepper, sprayed and tear gassed? Does he want to see the videos of the little girls having to have milk poured in their eyes to try to release the pepper spray from them? So it stops burning, because it sounds to me like that is what the president of the United States wants to see. These mayors are doing everything they can. Some are having good responses. Some are absolutely horrendous. But one thing is clear. Most of the people out there in the streets raising these issues, these are not violent people. These are not criminals. They’re not looting. They’re not doing anything wrong. They’re only doing what the constitution says they’re allowed to do. Meanwhile, the police forces the president of the United States, many of these mayors that Donald Trump is castigating as weak, they’re the ones actually breaking the law. That’s what’s happening in this country right now. That’s what’s so messed up and that’s what far too many people don’t quite seem to understand. A cop cannot do a drive by pepper spraying on peaceful protesters. That is a crime.

You cannot tear gas people. If you take that to the Hague, these cops are gonna go to jail. Not, not good jail, the Hague jail, right? We are sitting here violating the rights of our citizens left and right, which is what these protests were about to begin with and Donald Trump is sitting there on a conference call telling these mayors that they’re weak and they need to do more. The only thing these mayors need to do is not listen to bunker boy. He’s too terrified of his own shadow to step outside of the white house. He is too terrified of changes to the structures of power in this country because he has benefited so greatly from them and if they come crashing down, so does this very delicate and fragile facade that Donald Trump has been creating for his entire life.