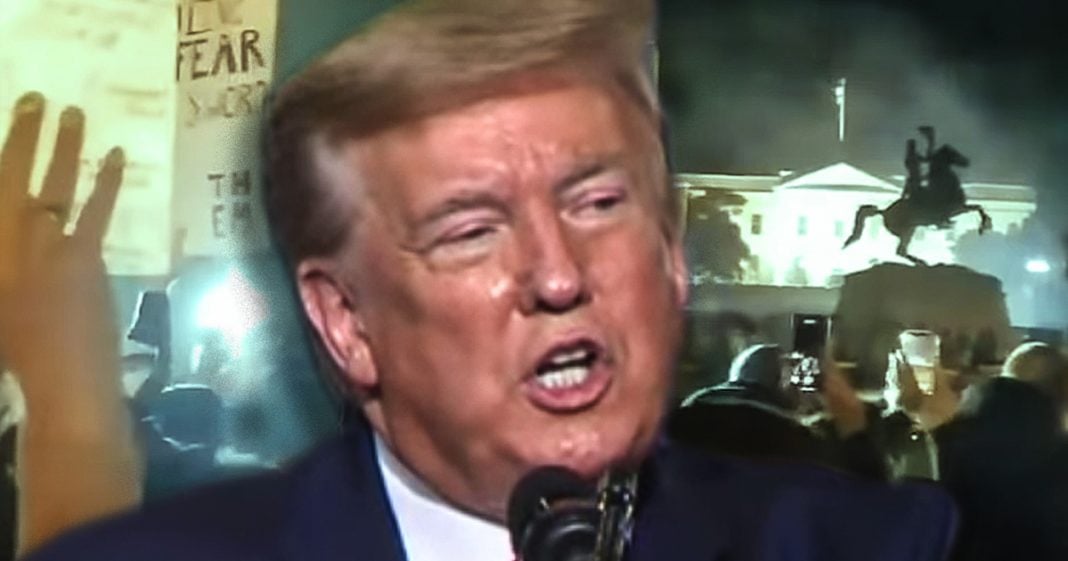 Donald Trump loves to pretend that he’s an extra tough alpha male, but whenever the situation gets a little dicey, he’s the first one to run and hide. On Friday evening, after he issued an ominous threat to protesters outside the White House, the President had to go run and hide in a bunker underneath the White House. Later in the weekend, the lights that usually illuminate the White House for the world to see were turned off, showing that the President was still trying to hide from the outside world. Ring of Fire’s Farron Cousins explains what’s happening.

On Saturday morning, tough guy Donald Trump took to Twitter to let us know that he and his secret service agents had thoroughly handled all of the protesters who showed up at the white house on Friday evening. He wanted us to know that had they gotten out of line, had they been a little bit more rowdy, they would have unleashed the most vicious dogs and the most ominous weapons against these individuals who showed up at the white house to basically let Donald Trump know that they do not approve of him, the job he is doing or in general what’s happening across the country. But tough guy Trump handled it and in his tweets he said the following, he said, they let the protesters scream and rant as much as they wanted. But whenever someone got too frisky or out of line, they would quickly come down on them hard, didn’t know what hit them. The frontline was replaced with fresh agents like magic. Big crowd, professionally organized, but nobody came close to breaching the fence. If they had, they would have been greeted with the most vicious dogs and most ominous weapons I have ever seen.

During this time, not when he was sending out the tweets, but when, when this was happening, Donald Trump was in hiding. He was taken into this special little safety bunker underneath the white house because things were terrifying. It is what they call a code red. Right? The, the threat level had gone to red. So they had to get Donald Trump out of there. He had to go hide in the bunker for roughly an hour because they were terrified of what was going to happen to him because they weren’t sure if the secret service was going to be able to handle that. Not that anybody was trying to do it, but mostly because they were overreacting because they’re cowards. That’s what happened here, folks. And if you don’t believe me, if you think this is well that’s just protocol, right? They take the president, no matter who it is down there, this isn’t a Trump thing. Okay. Really? Then why for the last two nights have they shut off all the lights outside the white house? The white house went dark. You know, they’re essentially trying to pretend that nobody’s home. Those lights outside the white house that illuminate it for the world to see at all times, a beacon for this country to be there to be seen, and they just, they just turn them off, nobody’s home.

You don’t need to come protest. No, I’m not here. I’m hiding down in my little bunker, but I’m gonna send out super mean awesome tweets because I’m a total bad-ass. Right? If you think that Donald Trump is in any way, some kind of masculine bad-ass, then I suggest you go get your head examined. There is nothing about that man that screams masculine alpha male, right? Not that that even matters. The problem is he pretends that he is. You know, I don’t care if you’re whatever, but when you pretend to be something you’re not, that’s when it’s a problem and that’s, that’s what this guy is doing. He’s sitting there in the white house, protected by God knows how many secret service agents, acting like he’s the best and baddest, and he’s going to go out there and personally sucker punch every protest or out there. The man couldn’t throw a punch to save his life. But his followers, his supporters seem to think that he is the epitome of maleness. No, he is the epitome of cowardice and he proved it for three straight days starting on Friday. The second protesters showed up, the second things got a little bit dicey, he ran and hid like a little baby.