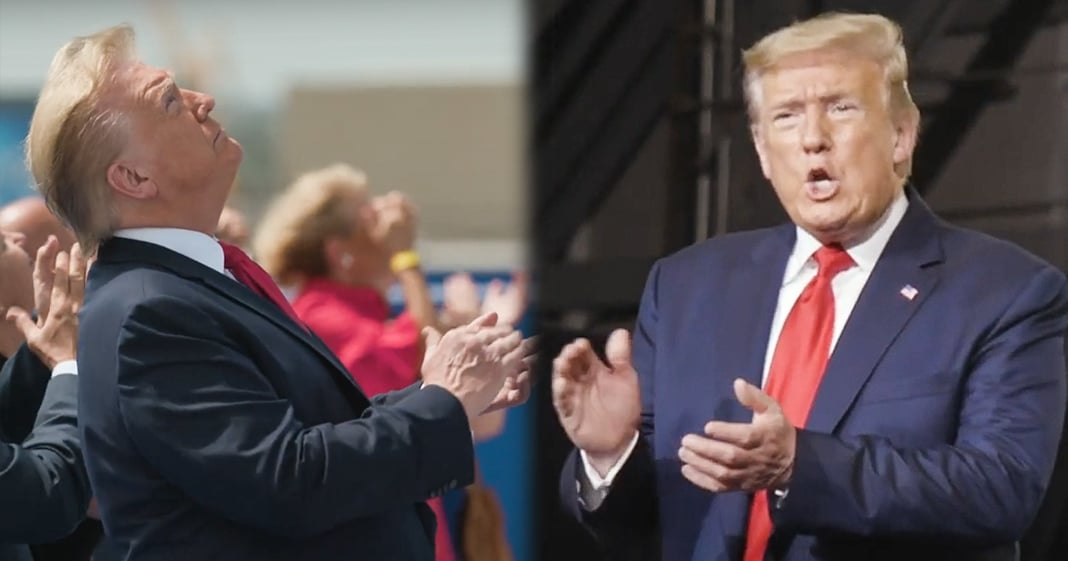 On Saturday, a SpaceX rocket successfully launched on a mission to space, the first launch from US soil in nearly a decade. And because it had been so long since the United States launched a rocket, Donald Trump took the time to claim that he is the savior of the space program in the United States. Nothing could be further from the truth, as this was the brainchild of a different egocentric billionaire, Elon Musk. Ring of Fire’s Farron Cousins discusses this.

On Saturday, the SpaceX rocket was finally able to launch, was supposed to launch last weekend, weather delayed it. It went up Saturday without a hitch. Everything is great. We got two NASA astronauts now in orbit. Everybody’s happy, especially Donald Trump because on Saturday when the rocket launched, and this was the Saturday after he hid underground in the bunker Friday evening. Trump was down there in Florida for the SpaceX launch and he gave a little speech where he said, with this launch, the decades of lost years and little action are officially over. Past leaders put the United States at the mercy of foreign nations to send our astronauts into our orbit. Not anymore. Today we once again proudly launch American astronauts on American rockets, the best in the world, from right here on American soil. Hell yeah, Mr. Trump. Way to do it, right? You did awesome with this.

That’s what he wants us to think. In reality, he did absolutely nothing. That he had no control over any of this whatsoever. He did not make it happen. He did not negotiate anything. He is not the one who came up with the idea, but here he is down there in Florida and yeah, the first rocket launched from the United States since 2011 but he’s acting like he did it. You didn’t, that was actually the job of another egocentric millionaire or billionaire, excuse me, Elon Musk and SpaceX. That’s him that he did this. But if you want to know the truth, he’s not completely wrong with what he’s saying. Back in 2006, George W. Bush and the Republicans decided, you know what, the United States is just spending too darn much money on NASA, you know, space exploration, science essentially. It’s science is what it is, but we’re spending too much on that. We can’t do that.

So they began a program in 2006 under George W. Bush Republican, to essentially prioritize the space program. Now this program was continued by Barack Obama. They liked it. They kept it in place. You know, we kept defunding NASA. If we needed to send astronauts up to the ISS, we’d send them over to Russia and they would go up with the sole use rockets there. But if we needed to send cargo to the international space station, we turned to private entrepreneurs here in the United States because we’ve privatized that part. We didn’t have to send that stuff to Russia. We would have companies like SpaceX just send up the supplies dock with the international space station. Worked beautifully. US saved a lot of money. These companies got a lot of federal grants to do it. So we weren’t actually saving any money at all. But companies made a lot of money and that’s always the point.

So Trump is right about that fact. Yeah, we did have to send American astronauts overseas to go up to space. But you had nothing to do with this program. This program was the result of privatization and that’s bad. The United States should have a space program that actually works, a space program that’s actually functional, but we don’t, we even have a space force now officially, at least on paper, maybe not in person, but on paper it exists. But we don’t have any, like, we don’t have the rockets anymore. We don’t have the money for this agency. This is actually something that is important, far more important, by the way, than spending $740 billion a year on tanks and planes and bombs. Maybe we should be focusing on science and space exploration, things like that. Things that could better the planet instead of things that could destroy the planet. But no, we would rather give all of that money, money to private industry, private companies to let the billionaires get richer while our federal government has to rely more and more on these corporations. That’s what started in 2006. That’s what Obama continued, and somehow that’s what Trump has taken credit for today.