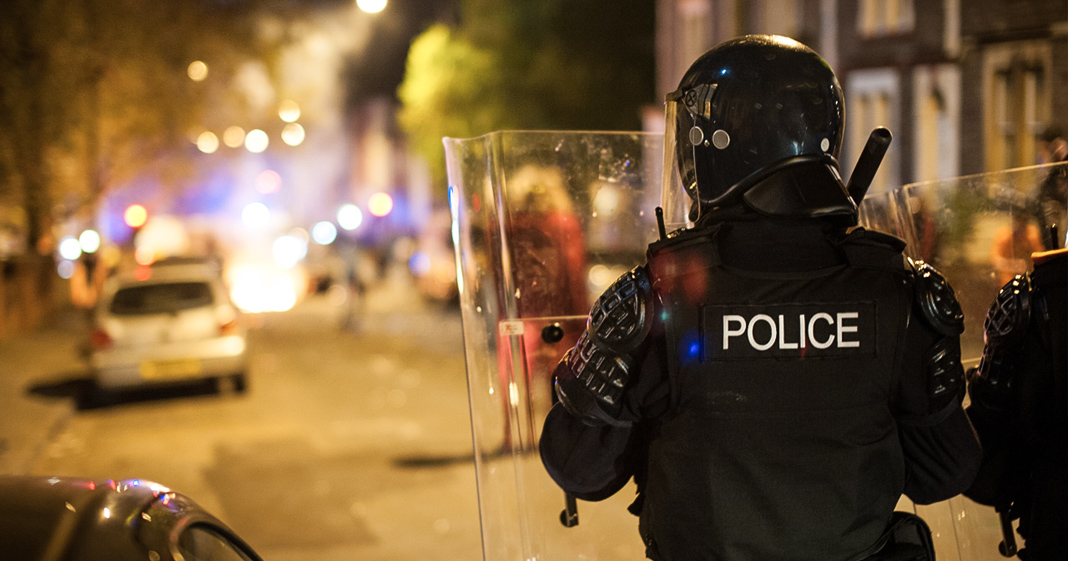 Videos and photos that emerged over the weekend painted a disturbing picture. Police officers from across the country were intentionally trying to harm civilians, even ones who weren’t involved in any of the protests. These over-weaponized, wannabe-Rambo officers are the problem, and they actually seem to be loving every minute that they get to go out there and just let loose on the public. Ring of Fire’s Farron Cousins discusses this.

The protests and civil unrest that have erupted over the past week after the murder of George Floyd at the hands of police officers escalated over the weekend and it escalated not because the protesters were getting more violent or because they were looting more big box stores. It escalated because that is what police officers in cities all over this country wanted to happen. They are the ones who are escalating the situations. I am sure you like me spend most of your weekend if you weren’t actually there a part of the protest, you were watching the videos, you were seeing what was happening to these protesters. You were seeing what these police officers were doing. You know the video from New York of the two cop cars sitting there at the barricades that just decide, you know what, we’re just going to start running over protestors and that’s what we did.

The video of the officer’s national guard members, I believe they were, marching down a neighborhood. I mean, like the old prepping for world war II videos you see of people marching, that’s what this looked like. Screaming at people on their porches to get inside and then when they didn’t comply within half a second started shooting them with rubber bullets. Videos like that flooded the internet over the weekend. The little girl, the little girl, the child having milk poured over her face because she was sprayed with pepper spray. The police officers casually driving down the road just spraying people with pepper spray out their window, peaceful people, sitting there people. Videos of police officers grabbing people as they just walk by. Knocking people down as they’re just standing there. Folks, the actions being taken by police officers across this country are exactly why the protests are happening in the first place.

They are perpetuating this cycle right now. Right now, a video from Seattle showed another cop with his knee on the neck of a man they had detained, which is exactly what started all this to begin with. They’ve learned nothing because they don’t want to learn anything because we as a society, as a country, don’t make them learn anything from it. Right? I think that’s the bigger problem. We don’t make them learn. They get away with it. They get away with it far too often. They get away with it constantly and unfortunately part of me still believes that once all this is over, once it dies down, once we move on to the next horrible thing that happens in this country, that this officer Derek Chauvin, I’m willing to bet nothing really is going to happen to this guy.

I know Keith Ellison is now in charge and that actually gives me a little hope, but we’ve seen things like this happen too much and that’s why the protests happened. It’s not just because of the death, it’s because the deaths keep happening and the deaths keep happening because we have an over militarized police force here in the United States where a lot of these officers go out there thinking every day that they’re Rambo taking on the Taliban. These are American citizens, these are constituents, these are taxpayers, and these cops are out there with military grade equipment because of the 1033 program out there with this military equipment, taking them out. Taking them out like they’re enemy combatants, when in fact, oh, maybe it’s a kid that took a candy bar from a store.

Maybe it’s just a black guy sitting there doing absolutely nothing. They don’t know. They don’t care because they think they’re out there, good versus evil. But that’s not what it really is like out there. But these cops don’t understand it because we don’t ever make them understand it. Because no matter how many times this happens, no matter how many people they kill, they rarely, if ever, face any kind of punishment or any kind of permanent change. So it happens again and the cycle as always perpetuates itself. And we as a country keep feeding them more military equipment and as long as we do that, these want to be Rambo’s are going to continue to think that they are Rambo and they’re going to act accordingly on the streets of the United States.