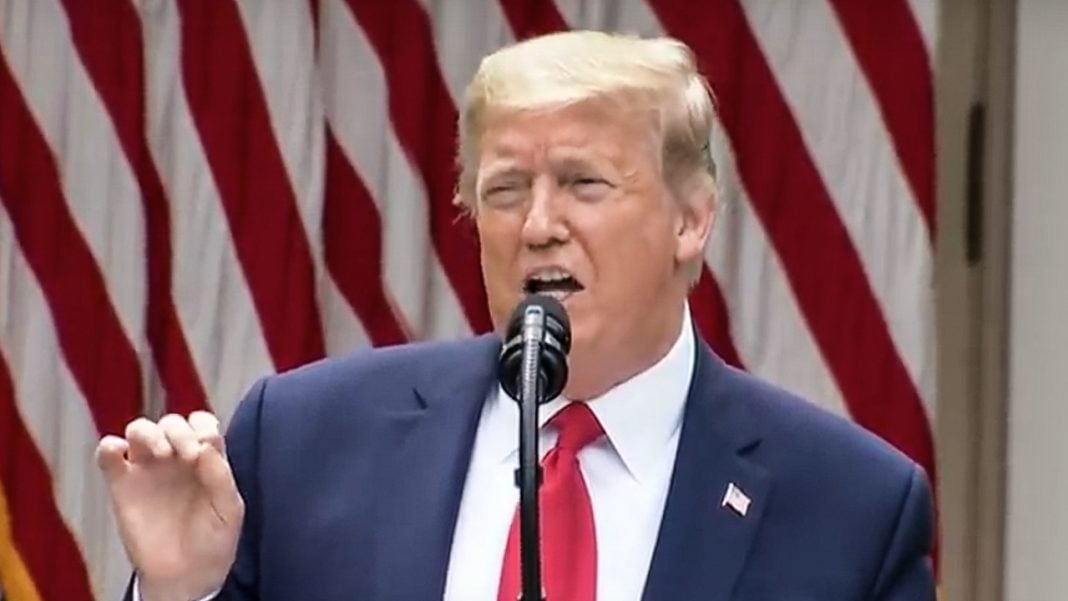 The United States needs a leader right now, but so far Donald Trump has only offered anger and resentment towards those who are tired of being oppressed. And the people closest to Trump have noticed, and according to reports they are warning him that he’s making the situation so much worse. Rather than tweet out calls for violence, the President should be calling for unity and some kind of resolution, his allies say, but the President refuses. Ring of Fire’s Farron Cousins explains what’s happening.

Last week after Donald Trump sent out his tweets saying that when the looting starts, the shooting starts, he thought he had, you know, basically hit a home run with that. Then he went to bed and then he woke up on Friday to, according to Axios reporting, a long line of aides and allies scolding him for the remark and this includes people that the president has a lot of faith in. People like hope Hicks, people like Mark Zuckerberg, who the president apparently called on Friday to get his take on the when the looting starts, the shooting starts tweet. And Zuckerberg said that well he didn’t necessarily agree with the tone of it. Thought, you know, maybe this is something that probably is not going to be good. Something you probably shouldn’t have said, which is what Hope Hicks said and according to the reporting from Axios, what I whole bunch of other Trump advisors told him. In fact, one unnamed advisor in this Axios report actually said that this was probably his worst moment, Trump’s worst moment in the white house, since Charlottesville.

That’s how bad the reaction has been inside the white house to this tweet. Now here’s the thing, this is not a saying that Donald Trump made up. There is a lot of history behind this, a lot of very ugly history behind it and knowing that history is actually why this statement is so much worse than Trump just thinking of it like, hey, if you’re looting, we’re shooting. Ha, that’s funny. It rhymes. I’m going to bed. No, it’s the history behind it. The connotation, right? That statement is about killing black people and Trump’s out there perpetuating it. You know, since it was first uttered in I think, what, 1968. He doesn’t understand what he’s doing and I think his aides and his allies are finally starting to understand that. He is not capable of handling this situation. All he is capable of doing is making it worse and even outside of that tweet, that is what he’s continued to doing, continue to do, excuse me.

Like with, for example, his tweets about the protesters outside the white house on Friday evening where he woke up on Saturday and said, oh man, we were gonna like, sick the dogs on them and most ominous weapons, he said. Whatever the hell that means. The man is out there threatening more violence at a time when he could be trying to unite the country, trying to fix things, trying to make things better, and that’s what’s freaking out those closest to him inside the white house right now. He doesn’t know how to handle this. He just knows there’s groups of people he doesn’t like. They’re doing things that he doesn’t like and he’s going to go out there and let everybody know that he doesn’t like this because he’s not politically smart. Personally, I think he’s not smart in general, but right now let’s just focus it on not politically smart and that’s what the aides are worried about.

They believe, and this is the reason they’re freaking out, is that these statements that he’s making these calls for more violence in the response to violence are going to turn off independent voters and suburban moms. That’s why they’re worried. They’re not actually worried that it may spark more violence, that it may cause police officers to feel emboldened by the president’s words and kill more people. They’re worried that it’s going to hurt him politically. That’s where their concern lies. Not in the fact that he is incapable of handling the situation. Not with the fact that he is legit calling for more violence. But just the fact that you know what, I think a mom out in Poughkeepsie probably isn’t going to like you saying this and we need her vote in November. Folks, that tells you everything about where the priorities of this administration lie. Everything they do is based on is this going to hurt us in November? Not is it going to help people? Is it going to hurt people? But how does this affect me? How does this affect my job in the white house and how can I convince the president that that is the only thing that matters?