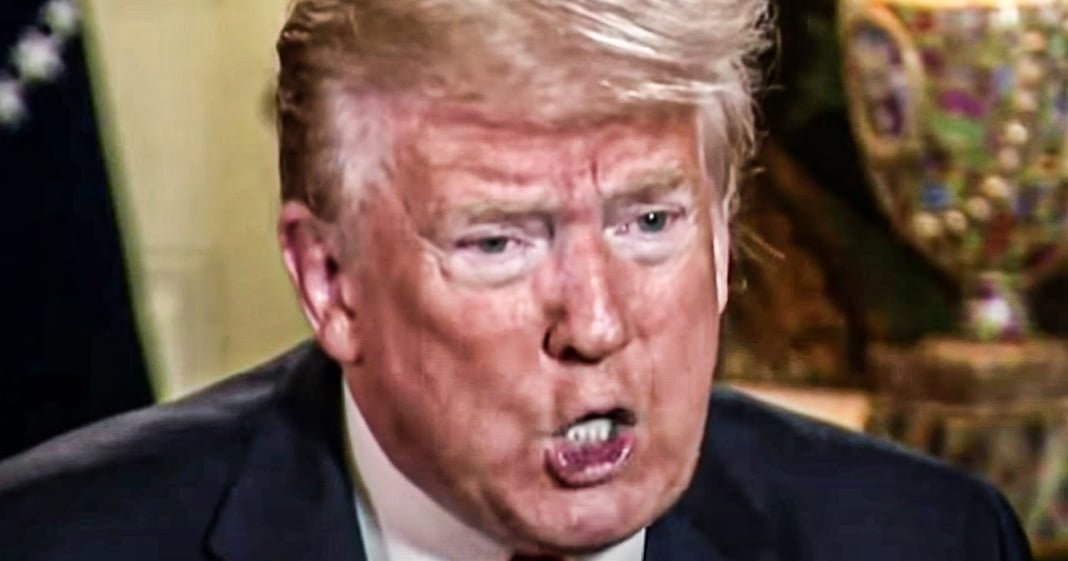 Donald Trump has never been a happy human being, but the past few months have seen him more unhappy than usual. According to reports, the President has been claiming that he is the real victim of the pandemic, and that the virus is killing his chances for reelection in an unfair way. He has it backwards – this was his opportunity to emerge as a real leader, but instead he put his own incompetence on full display. Ring of Fire’s Farron Cousins discusses this.

According to a new report by Gabriel Sherman from vanity fair, Donald Trump believes that he himself has been the biggest victim of the coronavirus pandemic. According to aides that Gabriel Sherman spoke with, as we were heading into the Memorial Day weekend this past weekend, Trump was as one aid put it, in an effing rage about the virus. Here is, here’s what Sherman had to say here and again, this is according to somebody who was with Donald Trump last week. He was just in an effing rage. He was saying, this is so unfair to me. Everything was going great. We were cruising to reelection. The intelligence community let me down because allegedly they didn’t tell him how bad things could get here in the United States. So he is the victim. Nobody told me this thing was coming. I didn’t know about this. I was going to get reelected and now look at this. Look at how horrible my poll numbers are. Look at how mean Fox news is, is being to me. Look at Twitter having to fact check me about other things. I am the victim of everything. Well, yeah, you are, but it’s not because the world is working against you, bud.

It’s because you’re a total and completely incompetent human being because you have no skills as a leader because you’re in over your head and you don’t know what you’re doing, but your narcissism won’t allow you to reach out to other human beings for help. That’s why everything sucks for you. He is right. He was cruising to reelection, folks. Let’s not forget that back in January, February, and even into early March, the only democratic candidate who was beating Donald Trump in head to head polls was Bernie Sanders. Biden was not. Now, state of Florida, huge swing state, Biden’s got a 10 point lead. Biden’s now winning with elderly voters across the United States. Nobody could have predicted that. Biden’s a horrible candidate with horrible policies if he even has them, and Trump is losing to this guy who can’t string a sentence together. Of course, neither can Trump, but he’s losing to him because his incompetence has been exposed. It’s sad and pathetic that it took the deaths of a hundred thousand people in the United States to finally make other people wake up and say, oh, I think this guy doesn’t know what he’s doing.

Now the rest of has been screaming about it literally every day since the man took office, but people finally woken up, and so here’s the, here’s the kicker. Didn’t have to be this way. This actually could have been Donald Trump’s shining moment to prove me and everybody else who’ve been saying the same thing I have for years to prove us all wrong, to make me look like an idiot. This was your chance to shut up the entirety of progressive media. Instead, everything you did proved us right. You proved that all your little sycophants out there on social media, all those people who retweet you and say, best president ever, you know, four more years and all that, you made them look like total morons because you exposed your own incompetence by your refusal to listen to people smarter than you, because in your brain, nobody smarter than you.

You legitimately think that you think you’re the smartest, the best, the brightest that there’s ever been. Nobody is. I don’t care who you are. Nobody is the best at everything. Everybody needs a little help sometimes, right? But this man can’t admit that. His narcissism has killed hundred thousand people in this country. That’s what happened and let’s be honest about that. And finally the public has woken up. Finally, everybody understands it. Except of course for Donald Trump, he thinks he is the victim. He thinks the coronavirus, the virus itself, the tanking of the economy, he thinks that is some kind of universal plot against him to make him lose the election. No. What happened was people saw what you are. They saw what you were about, and you have nobody or anything else to blame other than yourself for that.