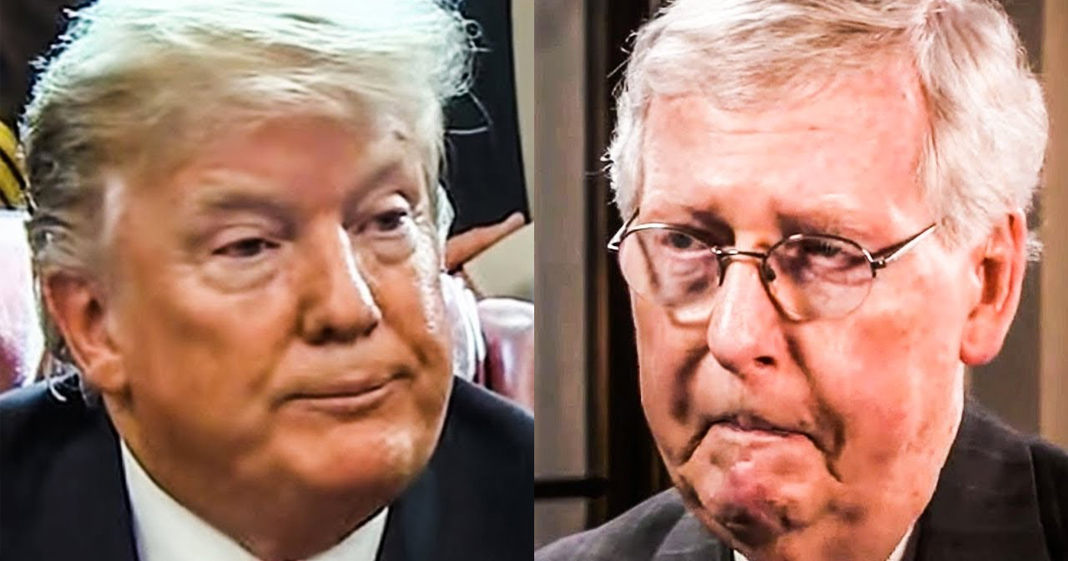 Republican operatives are now convinced that the Presidency is already lost for this year’s election, and that the Senate might go with it. These operatives are willing to lay the blame for this squarely at the feet of Donald Trump, but there’s plenty of blame to go around. Ring of Fire’s Farron Cousins explains why this isn’t just a Trump problem, and why the entire Republican Party needs to be concerned about their future.

CNN this week spoke to seven different Republican operatives, these are Republican advisers, Republican Senate aides and Republican strategists who all kind of said the same thing according to CNN, which is they’re terrified that Donald Trump is not only going to cost Republicans the presidency this year, but that he is also going to cost Republicans control of the Senate. Three seats, all that’s needed for the Democrats to retake the Senate is three seats, technically four because Democrats are definitely going to lose Doug Jones’ seat. So you need four and I think that actually just ties it up so you need five to take control. But these Republican insiders, Republican operatives, and again, even Republicans who work in the Senate are pretty sure that that’s going to happen and they’re already ready to blame Donald Trump for it. And to be honest, yeah Donald Trump deserves most of the blame here, especially for the presidency. Right?

Like there’s literally nobody else to blame for that than him, they’re right about that. He is losing to Joe Biden by 11 points right now. I mean that’s, that’s a pretty spectacular drop from where he was just two months ago. Two months ago it looked like Trump had this in the bag even though we were at the beginning stages of a pandemic. But because of said pandemic, Joe Biden is coasting to an easy victory right now. That coast is not gonna last Biden’s gonna have to do something to secure these voters because the protest you’re not Trump, so I’m voting for you. That doesn’t actually translate into real votes come election day. Hillary Clinton tried it in 2016, didn’t work. Biden’s got to do better. So yeah, the presidency that’s on the chopping block, but the Senate, sure, I mean, Trump, you know, he’s a Republican and Republicans are in control of the Senate.

So yeah, I can see that. But is that really his fault? You know, as I discussed in a video earlier this week, because a new report came out really laying it out there. That’s kind of on Mitch McConnell a little more than it is on Trump. After all, Mitch McConnell does not have a positive approval rating in any state in this country. Not one. The closest he comes is having a net zero approval rating in Wyoming because just as many people in Wyoming like him as hate him. So he’s got a net zero. Everywhere else it’s a net negative, including his home state of Kentucky. Lindsey Graham is now tied neck and neck with his Republican challenger. I mean, Graham and McConnell, the two most visible Republicans in the Senate. Everybody knows these idiots. They’ve been around for 30 years and I think those guys deserve just as much, if not more blame for Republicans poor performance in the Senate right now.

Those are the guys that people know. Those are the guys that people are looking at. And those are the guys who are greenlighting everything Donald Trump is attempting to do in this country. So yeah, it’s easy for Republicans to blame Trump. Just like it’s easy for Trump to blame Republicans for other things that even he’s responsible. Nobody wants to take the blame for anything. It’s, oh, it’s this guy, this guy, this woman, this guy. Uh, she did it. He did it. Who knows who did it, but it wasn’t me. It’s not because I’m bad. It’s because everything else sucks and I’m just the victim of the suckage. That’s not what happens. The public sees what the Republican party has become now. They see that Trump is the symptom, you know, the end result, not the cause of it. Mitch McConnell’s been causing damage in this country long before Trump even considered running for office.

And he’ll be doing it long after if he gets reelected this year. McConnell, that is. Same thing with Lindsey Graham. The public now sees that they have a better sense of that. Maybe not all of them have woken up to it, but enough of them have, and that may be all it takes to wrestle control of the Senate away from these Republicans. But at the end of the day, once they’re doing their autopsy after this, they can’t blame Trump for everything. They gotta do some deep soul searching and realize that their party has become everything they hate about Donald Trump. They created him, not the other way around.