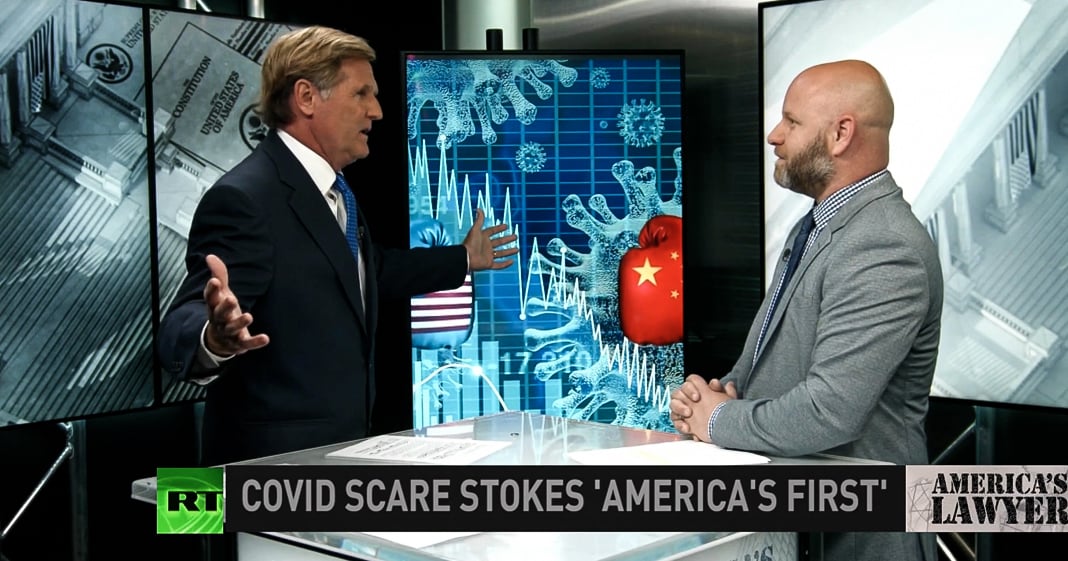 Via America’s Lawyer: As businesses nationwide are decimated by pandemic lockdown, many Americans now favor a divorce deal from Chinese markets after relying so heavily on foreign imports. Mike Papantonio & Farron Cousins discuss.

Mike Papantonio: The coronavirus has a majority of Americans calling for more corporate nationalism, which in fact, I got to tell you, it might not be a bad idea and what I mean here is TPP. Had Hillary won, we would live with TPP. TPP was a, it was a job killer. It was a consumer killer. It was an opportunity killer. It was a shift of all of America’s best parts all over the world and, and you know what, this, this story to me lands exactly where it should, what do you think?

Farron Cousins: No, I agree and I, I do think we need this big push to bring manufacturing back to the United States to bring these companies back and yes to make the US more competitive, possibly, possibly tariffs. I’m not, I’m not sold a hundred percent on that. We’ve seen how bad that is, but overall, bring the jobs back, bring the manufacturing back. You know, incentivize companies to build their product in America and that’s what we have seen pushes for that for years and years and years. But the US chamber of commerce has stepped in every time and killed every one of those buy American initiatives.

Mike Papantonio: How about that? Really? I mean, can you think of you destroy a buy American initiative. Okay. Why do you do that? Because the chamber of commerce, they want the, first of all, they only represent 19 companies, 19 of the biggest multinationals in the world. They don’t represent mom and pop. So they want to ship jobs overseas. They want, you know, they want the cheap labor. In the process we have lost our heart where it comes to manufacturing and jobs that should stay right here in this country and so as I watched this whole thing develop NAFTA, a disaster. Absolutely. Let me tell you how bad, let me tell you how it’s affecting the EU. People don’t even know this story. In the EU, this globalized notion of global politic, politics in the EU.

If you’re in Italy and you want to grow oranges in Italy, because that’s what you’ve done for generations, the EU says that you can’t grow and sell oranges because that’s reserved for Portugal or wherever it may be. They’re actually told what they can sell, what they can’t sell. That’s globalization. Here’s the other part of globalization. When we, when we have environmental rules in the United States, we’ve actually had China come into the United States and sue taxpayers for our environmental rules because it interferes with a treaty process under NAFTA. So I mean, it’s a disaster.

Farron Cousins: Right, Canadian, Canadian oil companies have taken us through the wringer on those environmental lawsuits.

Farron Cousins: Through NAFTA too. So yes we do. We’ve got to bring it back here and it’s sad that it took this pandemic for people to see, hey, maybe we shouldn’t be making everything overseas and then having to ship it back. Is, is it contaminated? Is there a risk with it? What happened if the pandemic was only in China and that shuts down a lot of American manufacturing because all of our stuff is made over there.

Farron Cousins: So, we’re waking up to it. But it took too long.

Mike Papantonio: But, but you’ve done, look, you’re a great writer. I’ll just tell you that. I followed your writing for a lot of years, trial lawyer magazine, you just turn out great stuff and early on you were writing about globalization. You talked about NAFTA, you talked about CAFTA, you talked about TPP. That was all invented by the Democrats. It was invented by Bill Clinton who said, we have to bring in, we have to bring in wall street in order for us to win elections.

Now the Republicans, you knew they were already taken as many wall street dollars as they could, stuffing it in their pockets, and then they would deliver whatever wall street wanted. But then Bill Clinton comes along and says, hey, you know what we want to play too and there comes NAFTA. There comes CAFTA and almost TPP, which is a frigging disaster for the American consumer.