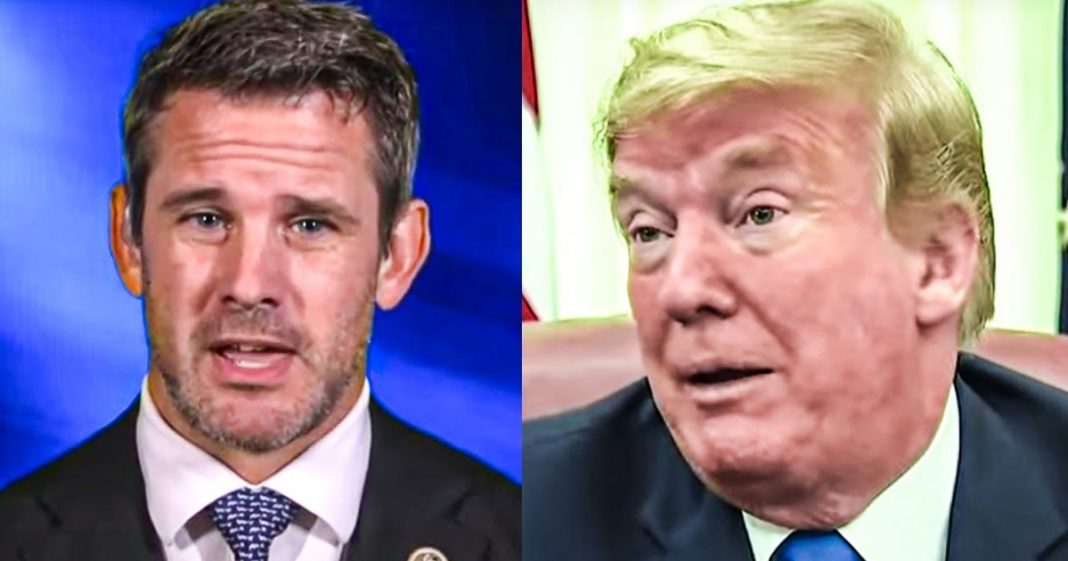 Republican Congressman Adam Kinzinger is begging Donald Trump to stop claiming that Joe Scarborough may have been involved in the death of a staffer at his office in 2001 when Joe was serving in the House of Representatives. Not only is this conspiracy making Trump appear crazier than usual, it is alienating one of the key Republican allies that isn’t associated with crazy Fox News. Ring of Fire’s Farron Cousins explains what’s happening.

For the past week or two, Donald Trump has been promoting the conspiracy theory that Joe Scarborough, host of MSNBC’s Morning Joe and former Congressman from my district down here in the state of Florida, that Joe Scarborough was somehow involved in the death of a staffer back when Joe was a Congressman in the year 2001. Trump has been tweeting this out repeatedly over the past few weeks and finally, one Republican lawmaker, a GOP congressmen from Illinois by the name of Adam Kinzinger, has had enough. Kinzinger tweeted out the following, after Trump tweeted out the story again, or the conspiracy theory, it’s not even a story, conspiracy theory. Kinzinger retweeted with this, he said, completely unfounded conspiracy. Just stop, stop spreading it. Stop creating paranoia. It will destroy us. Now, it’s not clear if this us, that this story is going to destroy, refers to the Republican party or to the United States of America as a whole.

We don’t know. But either way, that’s probably pretty bad for the Republicans, right? Because either it destroys you or it destroys everybody. Either way, you’re destroyed and Kinzinger is right because here’s what we do know about this story of the staffer who died in Joe Scarborough’s Florida office in 2001. The woman was found dead in the office. They did the autopsy. They found out she had an undiagnosed heart condition and what they had determined happened was that this heart condition calls the woman to faint. And when she fell, she smacked her head on the desk and that blow to the head is what killed her. And this has been settled for quite some time, but Trump wants to drum up this conspiracy theory because Joe Scarborough, who used to be Trump’s friend. Right? He and Mika Brzezinski went to Donald Trump’s Mar a Lago for New Year’s Eve for a couple years. They were buddies. They were invited to that big cool party before Trump became president.

Things aren’t so good now and so Trump’s pushing this conspiracy theory and Republicans are tired of hearing it. But it’s not just because they think it’s going to hurt the Republican party. What it’s going to do is hurt their only ally at MSNBC. Because right now MSNBC isn’t viewed as the crazy network, not like Fox news is. And being on MSNBC is a good way to reach more Democrats, corporatist Democrats, but you still get to reach them. That’s an audience you don’t get when you go on Fox news and Joe Scarborough, even though he has left the Republican party is still a Republican. His time in Congress, the things he did in Congress, if you go back and look at his record, that is what led us to where we are now. That’s why we’re here. Joe Scarborough helped pave the way. The zebra hasn’t changed his stripes. He just doesn’t like what Trump is doing, openly. Scarborough was all about the same kind of stuff back when he was in Congress. Just doing it privately, right?

The internet wasn’t as big back then. Blogs weren’t a thing. YouTube didn’t exist. Social media was a far off concept. So you could get away with things like that in legislation because nobody paid attention. Scarborough paved the way for this. But Scarborough definitely did not kill this woman. And in fact, the family, the woman’s family is refusing to speak out on this because they have said they’re terrified of the pro Trump trolls on social media coming after them. They know Scarborough did not kill their daughter. I am no fan of Joe Scarborough, not when he was in Congress, not since he’s left office. Not even given the fact that he and I both worked at the same law firm. He was a lawyer. I clearly am not, or was not, am not, will not be. But yeah, still not a fan of him. But nonetheless, he didn’t kill that woman. What happened to her was an unfortunate accident and Trump’s exploitation of this to attack Joe Scarborough is beyond reprehensible. But this is exactly what we have come to expect from the president. But if more Republicans are willing to speak out and call him out on this, maybe just maybe in this one instance, you might be able to get the moron to shut the hell up.