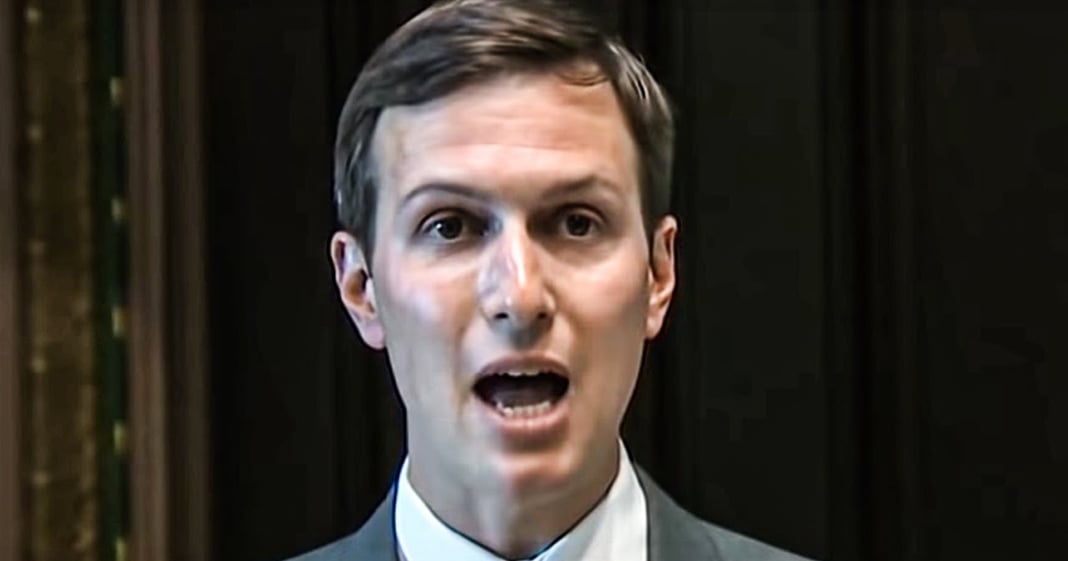 Jared Kushner is being ridiculed for taking on another job that he is definitely not qualified to do: He is trying to craft the entire Republican Party platform for 2020 ahead of the convention. We all know that Trump has hijacked the already-horrible Republican Party, but this just goes to show how deep down the Trumphole the Party has fallen if Kushner is going to tell them what they stand for for the next 4 years. Ring of Fire’s Farron Cousins discusses this.

According to reports, Jared Kushner has once again taken on a job that he is in absolutely no way qualified to be doing. And this new job of Jared Kushner is actually quite consequential because this new job is Jared Kushner hijacking the entire Republican party by being allowed to craft the parties 2020 platform ahead of the Republican convention in August. Again, this is according to reports, Kushner has taken on this job because unlike in 2016 this year, 2020 the Trump campaign, the Trump administration, by extension gets to write the whole platform. Right? They’ve got all the delegates, they’ve got all the power. So by party rules, they get to craft the entire platform of the party. Now you may think, well, who cares? Party platforms, right? It’s just kind of a guideline. We don’t have to stick to them. That’s true. That is absolutely 100% true. These party platforms may effectively mean absolutely nothing, but they could also mean everything and anywhere in between, nothing and everything. So who knows at this point? The problem is the transformation of the party is complete.

Not that it was anything worth bragging about. You know, before Trump came along. In fact, that evolution of it that produced him was pretty, pretty disgusting. That, that’s why we were in the situation we’re in. That’s how Trump got elected. You know, he’s not the cause, he is the symptom. But now this symptom, this tumor, this cancer that was allowed to fester because of the conditions created within the Republican party, the cancer is now taken over. The cancer is calling the shots and the cancers cancer, which would be Jared Kushner is now crafting the party’s platform. So Jared Kushner, according to reports, is going to be the one who tells the Republican party, this is where we stand on this. This is our plan for this and if you don’t like it, then you’re going against the Republican party itself. Now we have seen plenty of Democrats, 2016 is a great example, fighting over the party’s platform because for the Democrats, this means something. That’s why it was infuriating when they refused to include a complete ban on fracking in the 2016 party platform.

That’s why this year it’s still so important for people to vote for Bernie Sanders in the primary, even though he’s dropped out. Because if he gets enough delegates, he and his people get a seat at the table to help craft the party platform. Because we take it very seriously. For Republicans, there’s not going to be any fighting. There’s not going to be any arguing over what’s in that platform. And more importantly, as we have seen from Republicans, there will be absolutely no dissension about what is in that platform. They always agree in lock step. They may publicly say, well I don’t like what Trump’s doing here, but they’ll vote for it anyway. They’ll support it any way and then six months down the road they’ll be going on Fox news telling us why this is the only way forward. The same thing’s going to happen with the party platform written by an extremist who knows absolutely nothing about anything. Jared Kushner is a moron and not even like a semi competent moron. More like a, hey, stop eating dirt off the driveway, moron. But that’s what we have, and that’s the guy who is now paving the path forward for the Republican party. Best of luck with that.