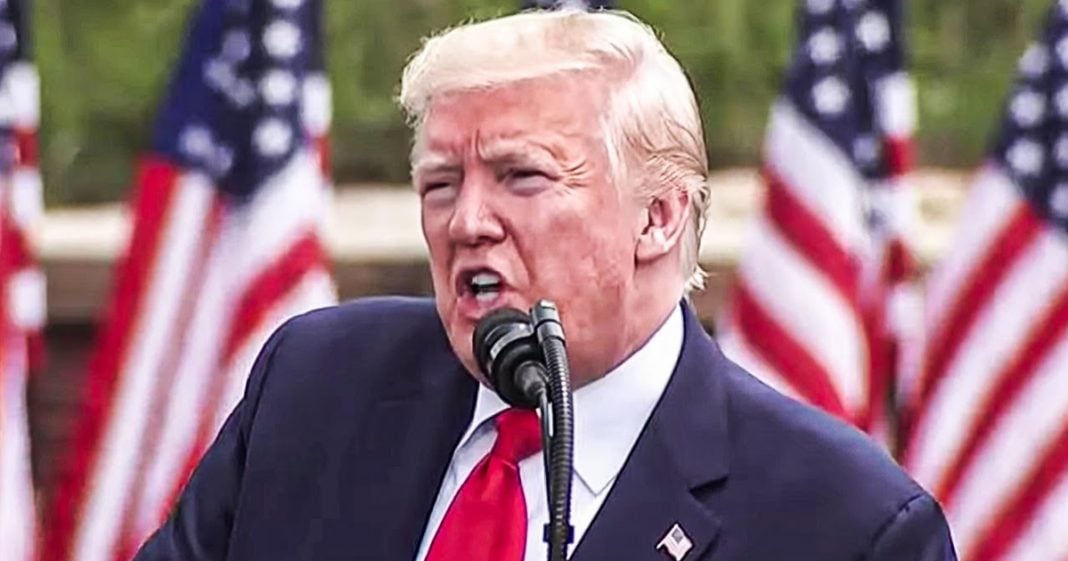 Following the murder of George Floyd at the hands of police officers in Minnesota, the situation has rapidly deteriorated as an angry community has risen up to fight back against a lifetime of oppression. Donald Trump has now threatened to send in the military to shoot protesters and looters, a move that, if it happens, would only serve to make the situation worse. Ring of Fire’s Farron Cousins discusses this.

By now, I’m sure everybody is aware of the situation that has unfolded in Minnesota following the murder of George Floyd at the hands of four Minnesota police officers. This morning, Donald Trump finally decided to weigh in on what’s happening there and I guess to make things so much worse. Donald Trump tweeted out the following, he said, these thugs, thugs is in all caps. These thugs are dishonoring the memory of George Floyd and I won’t let that happen. Just spoke to governor Tim Walz and told him that the military is with him all the way. Any difficulty, and we will assume control. But when the looting starts, the shooting starts. Thank you. When the looting starts, the shooting starts. Now, Trump did not come up with that quote. That was actually from 1967, official down in Miami came up with that. But nonetheless, when the looting starts, the shooting starts. So Donald Trump is out there threatening to send in the military, which the national guard has already been dispatched to shoot civilians.

Using the United States military to shoot civilians. Not speculation. the president said, when the looting starts, the shooting starts and we have seen the looting. Sure. We have seen looting being carried out by people who have been oppressed for their entire lifetime. For people who are sick and tired of watching everything flow to the privileged instead of them. I honestly, at this point, I can’t even condemn these people for doing it. I can’t even say that it’s wrong based on what’s happening in this country right now. What is wrong, however, is what the president said here. After all, killing an innocent human being is, is pretty much what started all of this to begin with. Not to mention the fact that now they’ve got your attention, the looting got your attention, got the nation’s attention. Got everybody paying attention to what’s happening here, and we’ve seen the right wingers across the spectrum come out there and say like, well, why can’t you peacefully protest?

Because Colin Kaepernick tried to do that and none of y’all listened. You basically got him banned from professional football. So the peaceful protest didn’t work. The black lives matter didn’t work. So then they got to move onto the next thing to get you people to understand what is happening to their communities. George Floyd was not the first, we know that and unfortunately we know that he is not going to be the last. How do we know that? Well, because yesterday a CNN reporter who happened to be a minority was arrested on the air while filming a segment. They knew that this man was not a threat, but the police walked up to him while he’s filming for CNN by the way, and arrested him. They’re going to continue to profile minorities. If you do not look white, then they’re not going to just let you go. If you are white, then it doesn’t matter if you’re carrying an AR 15 on your back or if you’ve got your finger on the trigger while you’re marching down the street, they’re going to let you live. They’re going to let you do whatever the hell you want because your white.

White privilege absolutely exists in this country. We have seen just in recent weeks, white people do things that would have gotten a black person or a Hispanic person or even a Muslim shot and killed on the spot, like without hesitation they’d have been dead. But the white people were just allowed to do it. Screaming in cops faces while holding assault rifles. You think any black person anywhere in this country could walk up to an officer while holding an AR 15 and start screaming in their face and not end up dead? Because I don’t. But that is the country in which we live and Donald Trump absolutely being the most incompetent and asshole-ish president we’ve ever had is out there tweeting that he is going to send in the national guard to just start shooting. He wants more murder and as we all know, that’s only going to serve to make things worse. Because if you think it’s bad, what’s happening in Minnesota right now, wait till we see the footage of the military shooting American civilians and I can promise you at that point, these protests will not just be limited to a Midwest state.