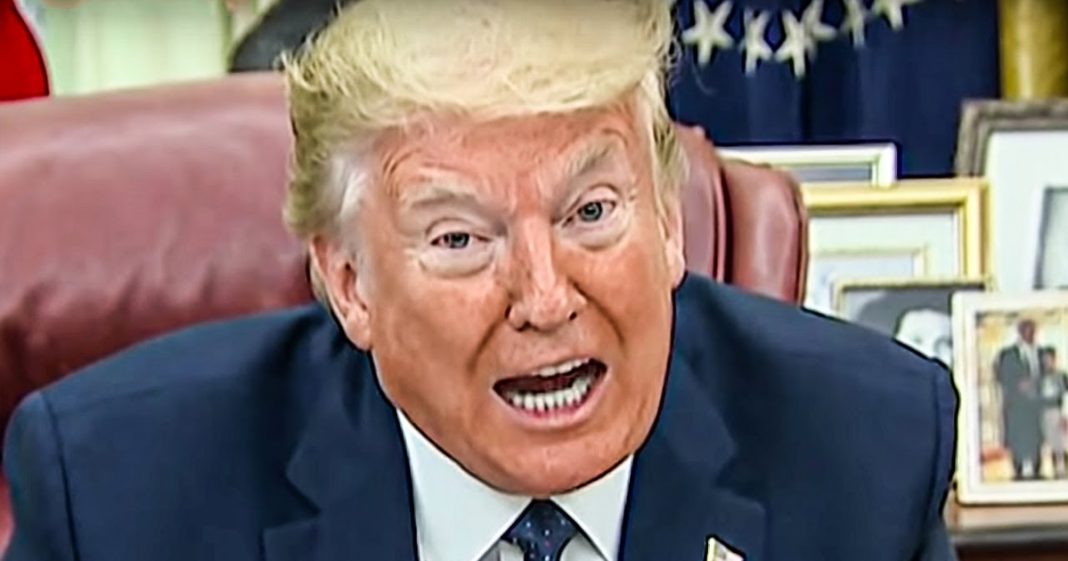 Jack Dorsey and the folks at Twitter have entered into a war that they never thought they’d have to fight, but they are also clearly not afraid to fight it. After Trump signed his executive order allowing people to claim political bias against social media outlets, Twitter hit Trump again with another warning label for a tweet that he sent that allegedly glorified violence (which it definitely did.) Ring of Fire’s Farron Cousins explains what’s happening.

On Thursday, Donald Trump signed his executive order that was a very clear violation of the first amendment. The federal government trying to regulate the speech of corporations, right? Trying to tell the media essentially what they can or cannot do or say, because social media might be social, but it’s media nonetheless and according to Trump’s executive order, if, if anyone perceives bias from a social media outlet, Twitter, Facebook, LinkedIn, if, if that’s your thing, you can go ahead and file a complaint and the FCC or the FTC, depending on, I guess the level of the complaint, one of those government agencies is going to waste tax dollars to investigate that for you and then if they find out there was political bias, who the hell knows what will happen by then? Because we’ll never get to that point, folks. This is a violation of the constitution.

Legal scholars on the right and left have already looked at this and said, ah, you can’t do that. It doesn’t matter how conservative the court system is. Wherever this gets challenged, it ain’t going to stand. So you can’t do that. This whole thing will be struck down and it’s all going to be a distant memory of the president who tried to crap on the constitution and institute his own version of fascism here in the United States. That is exactly what’s happening. But to their credit, Twitter’s not backing down because let’s not forget this whole thing began because Twitter put a tiny little fact check on one of the numerous lies Donald Trump tells every single day. They’ve been letting him get away with it forever. They’d gotten huge public backlash for not reigning him in or suspending his account. He was using it to promote hate, to spread misinformation. Finally, this week they said, okay, he lied about voter fraud and mail in voting. So we put a little disclaimer and said, hey, get the truth about this. That’s what sent him over the edge. That little statement from Donald Trump is what allowed him or made him, excuse me, violate the constitution. That’s how little it takes. That’s how sensitive he is.

Here’s the thing. Twitter’s not backing down and I love that because in Donald Trump’s Friday morning tweet where he said that the people in Minnesota were thugs and that he was tempted to send the military there to start shooting. Twitter put a disclaimer on that. Essentially, they hid the tweet, they put a disclaimer over it saying that this tweet glorifies violence. But, you know, we believe it’s in the public interest to leave it available because obviously it’s from the president of the United States. But we have to put the disclaimer up because yes, in fact, it does glorify violence. Now, just yesterday, by the way, Donald Trump retweeted a, an account that called for the death of Democrats. It said, the only good Democrat is a dead Democrat, and Trump retweeted that. So we have this disclaimer, we have Twitter saying, all right, you’re going to be a Dick to us. We’re going to make you pay for everything. Every time you now violate our rules, we’re going to enforce it. We’re not gonna look the other way anymore.

This isn’t going to be a one off instance and every single time you screw up, we’re going to make sure the public knows about it. We’re going to make sure that you can’t do this anymore. We’re going to make sure that people understand that, yeah, you are in fact a vulgar pile of human excrement because Twitter is in the right here. Donald Trump cannot police or enforce any policies at that company unless of course it’s related to their hiring or firing of people or the working conditions at Twitter. As far as who’s allowed to utilize this business, there is nothing the federal government can do about it. Jack Dorsey could come out to, today and say, guess what? We’re going to become a Democrat only outlet. I don’t think he’d ever do that and yeah, sure, maybe there’s some legal implications of that, but they would never do that. That would be something that, you know, have to be tested in the courts. But as for what Trump did, there is no question about that. This is illegal. You can’t do that. But he did it anyway. Twitter’s fighting back and in this particular instance, Twitter is going to win.