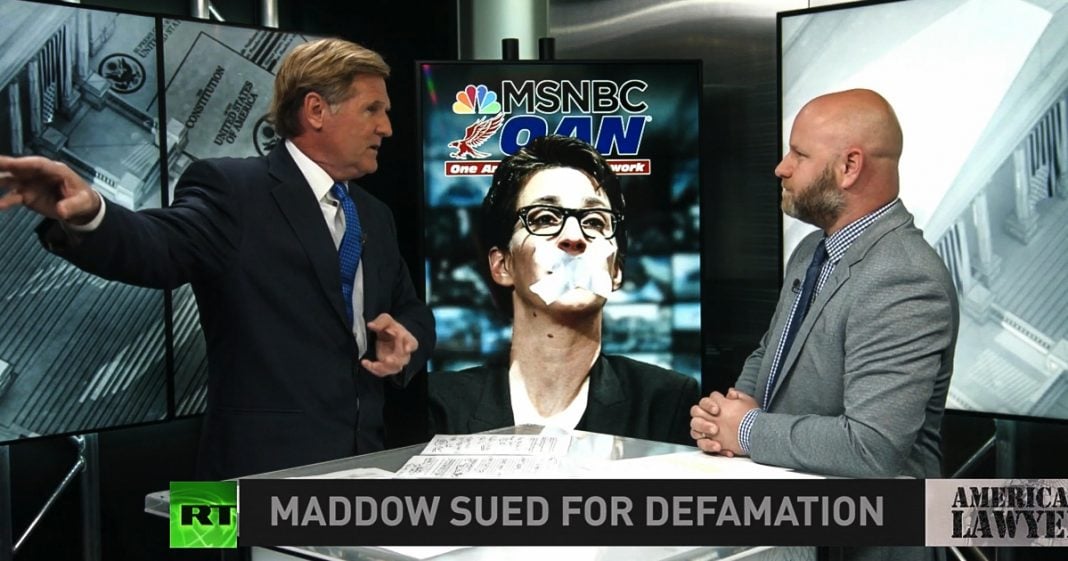 Mike Papantonio:             MSNBC’s Rachel Maddow is being sued for defamation after her Russia obsession went a little bit too far. Look, I looked at this case. I’ve, I’ve analyzed as best I can. She, she really should win this case. Here’s the problem she has though. Okay. The judge on this case is in a very difficult situation. The judge is being asked as a matter of law without a jury, make the decision that there’s no case here. There is enough information here to go to a jury. Here’s the problem she has. If it goes to a jury, all of that Russia attack that whole hysteria that that not just her, it was Phil Griffin. Phil Griffin.

Mike Papantonio:             Yeah. The whole network. MSNBC thought they could make some money on the whole Russia hoax. Okay. The whole hysteria. So they tell Rachel, they tell all the players go, this is your talking point. Now if this gets to a jury, if this gets to a jury and it, it should get to a jury. Again, my opinion is it’s not a case, it’s winnable in front of a trial, in a jury trial. But the problem she has is all this other stuff she’s been talking about. It was like hysteria. That’s all in front of the jury.

Farron Cousins:                  Right. And the issue here is, you know, you have the One American News network, which is full blown right wing propaganda.

Farron Cousins:                  And so that statement is factually incorrect. There is no truth to that statement and she based it on a report from the Daily Beast that there happened to be somebody working at One America who was also working at Sputnik. So they were working two jobs getting paid through both and she tied that one person getting paid through Sputnik to somehow the whole network is funded. It’s, this is beneath Rachel Maddow. The Rachel Maddow we used to know.

Mike Papantonio:             You can blame it on leadership at MSNBC that says, hey, we got this, we got this great story, we got this little freak Schiff, whatever his name is out in California, we can bring in all the time. He can talk about the Russia hoax. This is going to go a long way. Now we’re going to get criticism because we’re on RT America. Well look at our, if you look at our product, you’ll see it’s anything but pro, pro-Trump. So the, but the point being, as I, as I look at this case, the biggest threat she has, it’s actually two threats. One is the judge dismisses it. If she, if the judge dismisses it, it goes up on appeal. My call is, it comes back down for a jury trial because there’s a question of fact.

The question of fact is, was she stating a fact or was she stating an opinion? Was it satire or was it serious? And when you look at all the stuff that they asked her to do, I, you know, she is a brilliant woman. Rachel Maddow is a brilliant woman. But, but I know how the politics of MSNBC works. I saw it with Ed Schultz, dear friend of mine and, and I, and she was at, you know, you got to push this story. So now they’re stuck with what could be a $10 million, $15 million jury verdict if it gets to a jury. Because when they bring in all the other stuff that MSNBC has been trying to do in this Russia hysteria, because it’s so, you know, it sold advertising. That’s what it was about. Sell advertising.

Mike Papantonio:             In regardless. Did the Russians hack? Of course they did. There’s no question that they hacked. Did it mean Hillary, was it the reason she lost? Of course not. She had these morons running her campaign, the Podesta brothers. That Bobby Mook, how do you, how do you lose to Trump? But they had to have it, they had to have a fallout.

Farron Cousins:                  Right, and what Rachel had said here, the whole comment that sparked this lawsuit, that shows the whole thinking of this, you know, more moderate establishment, Democrat type. Anytime you disagree with them, anytime you’re not on board with them, you’re Russian funded.