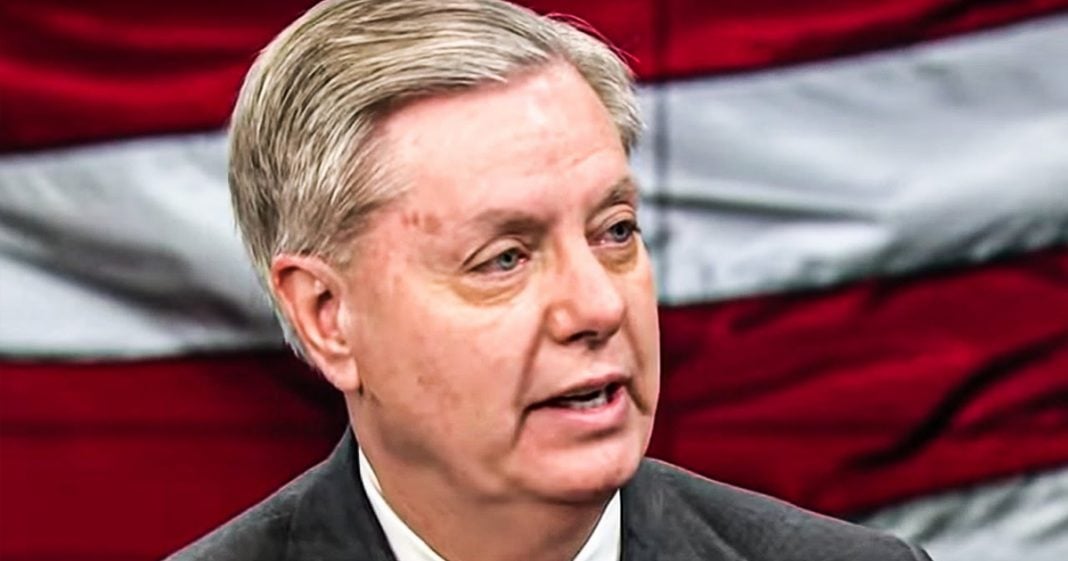 Republican Senator Lindsey Graham knows that the clock is running out for both Donald Trump and the Republican majority in the Senate, so he is urging judges across the country to start retiring so that Donald Trump can appoint a younger, likely more conservative justice, to take their place for the next 30 years. This is the sole reason that Republicans have stood by Trump for all these years, as Ring of Fire’s Farron Cousins explains.

You know, one of the more interesting things that I’ve seen over the last few years is people wondering what the hell happened to Lindsey Graham. Right? Before John McCain died, Lindsey Graham was one of the Republican’s more outspoken critics of Donald Trump. You know, he’s the one who tweeted, and the tweet comes up frequently, like, if we nominate Donald Trump, we will get destroyed and we will deserve it. But then suddenly, you know, John McCain dies. Lindsey Graham flips the script and goes golfing with Trump, becomes his best friend, one of his staunchest defenders and everybody’s out there saying, oh my God, what happened to Lindsey Graham? I wonder what kind of compromising information Donald Trump has on Lindsey Graham and I had done multiple different videos over the years explaining to people that nothing happened, nothing changed.

Lindsey Graham is now and has always been total piece of crap, total piece of crap, and Lindsey Graham luckily reminded everybody again this week that he is in fact nothing more than a giant scumbag. And he did it by going on conservative talk show host Hugh Hewitt’s radio show, and essentially calling for elderly or even just older Republican judges to go ahead and retire so that Donald Trump and the Republican controlled Senate can go ahead and just pack those courts for the coming generation. Here’s what Lindsey Graham actually had to say. He said, this is an historic opportunity. We’ve put nearly 200 federal judges on the bench. If you can get four more years, I mean it would change the judiciary for several generations, several generations, folks. So if you’re a circuit judge in your mid sixties, late sixties you can take senior status. Now, would be a good time to do that if you want to make sure the judiciary is right of center.

So here’s the thing, you know, Republicans for years have been warning us about these so called activist judges who want to implement political policy from the bench. That’s what Republicans, the US chamber of commerce have been telling us is happening and they’re right it has been happening except it’s not happening from the side that they think it’s happening from. It is happening, as Lindsey Graham said, from these judges who are right of center, because Graham knows exactly what he’s doing. They know that they’re in trouble come November. They could likely lose the presidency. They could likely lose the Senate and then suddenly their judicial confirmation spree comes to an end. So what do they do? You know, they’re running out of vacancies to fill. So that’s why they’re out there saying, hey, if you’re an older Republican, how about you step out of the way so we can let some of these young whippersnappers that the American bar association tells us aren’t even qualified, take your spot.

So they can serve for 30 or 40 years. That is what the Republicans want. This is why this is the only reason why Republicans have not taken down Donald Trump. This is why they haven’t invoked the 25th amendment. They know the man’s insane. They know that they could very easily invoke the 25th amendment, get him out office, but they don’t do it because this is what they want. It’s not about the tax cuts. It’s not about the regulations. The number one prize is now and always has been the judiciary, not the Supreme Court, every court in this country, and believe it or not, folks, they’re pretty damn close to having all of the courts, at least any of the ones that matter under their control. You give them another four years and they absolutely will have every court under their control.