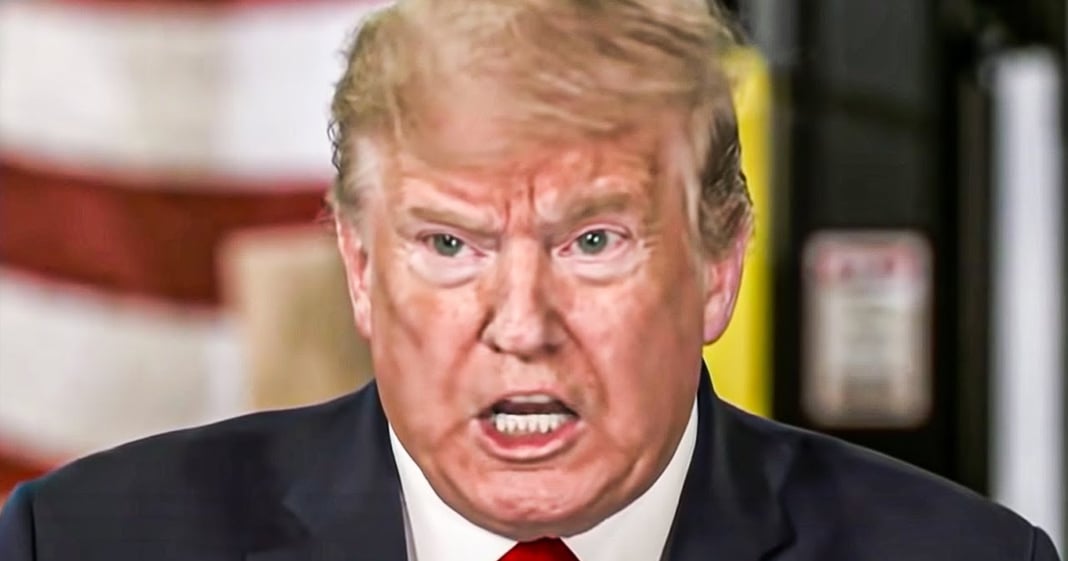 According to White House Press Secretary Kayleigh McEnany, Donald Trump is preparing to issue an executive order aimed at social media. She didn’t elaborate on what the executive order would do, but it is related to Donald Trump’s meltdown over Twitter issuing a fact check of one of his many lies on the social media network. Legal scholars have already said any attempt to silence these companies is a clear violation of the Constitution, but that is unlikely to stop the President. Ring of Fire’s Farron Cousins discusses this.

Donald Trump is still furious at Twitter for fact checking him the other day for the first time in years. I mean, after hundreds and hundreds of lies this man has told on Twitter, possibly thousands. Twitter finally comes along and for one little tweet they say like, hey, get, get the facts here. We’re gonna, he lied about this. So one time out of potentially thousands of lies, Twitter decides to very subtly call him out for it. Trump throws a massive tantrum, has a complete meltdown. So today we get an executive order from the president trying to reign in and effectively destroy the neutrality of social media websites. This executive order would allow for the federal trade commission, the FTC and the federal communications commission, the FCC to investigate claims of political bias at social media outlets. So if you think Twitter is shadow banning you because you’re a conservative, you can file a complaint and the federal government is going to have to go and investigate it now.

If you’re mad, that Diamond and Silks page got removed from Facebook, you can file a complaint and then the federal government, with your tax dollars, is going to have to investigate why Mark Zuckerberg took out Diamond and Silks page. This, uh, it’s really hard to talk about this with a straight face because it’s so dumb, not just because of what the order does, right? But because it’s so illegal for the president to do this, that it’s shocking he’s even bothering with it, folks. This isn’t going to hold up in any court across the country, no matter how many conservatives it’s packed with. This is very, very, very, very, very clearly a violation of the first amendment. The federal government does not have any power whatsoever to regulate the politics or policies of the private businesses. They simply don’t because if they do, then suddenly that baker out in middle America that didn’t want to make a cake for the gay couple, uh-oh. You can’t, you can’t do that anymore. See, like, it’s a slippery slope. It’s not going to fly.

Twitter is not doing anything to punish conservatives over liberals. Facebook is not doing that either. It’s just that conservatives are a little bit whinier about it when they’re the ones who get banned or blocked or whatever suspended. So they go out there and they cry, piss and moan, because Republicans are a bunch of little babies. Democrats don’t typically do that. So nonetheless, that’s what’s happened. So we get this executive order. The president thinks he can reign in the powers of these social media giants for things that aren’t even true, by the way. That’s the craziest part here. These things that the president thinks are happening aren’t even actually happening. Right. We’ve had studies about this. We’ve had reports on this. It’s not true. But just imagine if the president got this pissed off and worked up over, I don’t know, a hundred thousand people dying from covid 19 here in the United States. You know, wow. He got fact checked once, we got an executive order, two days later, hundred thousand people have died in the pandemic just in, in, in the United States and he’s saying reopen the country. Who gives a crap? Wow.

Shows you where this psychopaths priorities lie. That’s what he is. He is a psychopath. There is no question about it. He checks off the boxes. This man is a psychopath and all that he has done since becoming president of the United States has been to protect his fragile male ego. Twitter hurt it the other day, so now he’s lashing out and trying to hurt them in return, but all that’s going to happen is a very well publicized legal battle where in the end, the president’s going to be told that he violated the constitution. May take us a while to get there. I don’t imagine it would take more than a year though, considering the importance of this executive order, but all along the way, the president’s going to claim that he has been censored. He’s been attacked and he is being treated just very unfairly by these companies. None of which, by the way, will be true. Trump is violating the constitution with his executive order, and there was very little question about it. Legal scholars over the last few hours have already come out and agreed with that point. There’s no way this thing stands, but if it helps Donald Trump sleep a little bit better tonight and maybe stop whining for an hour, then sure, go ahead and issue your executive order. We’ll dismantle it tomorrow.