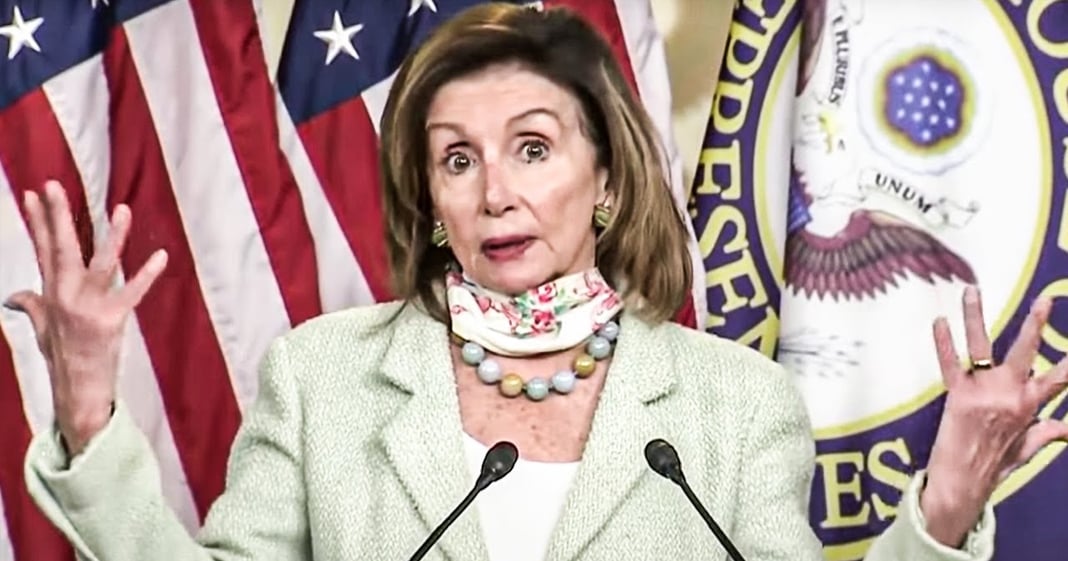 Republicans in the House of Representatives have filed a lawsuit against Nancy Pelosi over rule changes that the Democrats passed to comply with social distancing guidelines. Republicans say that the rules are unconstitutional, but what they are really doing is trying to keep the House from being able to function properly ahead of the November elections. Ring of Fire’s Farron Cousins explains what’s actually happening.

Republicans in the house of representatives have decided that the only way they can stop Congress from functioning properly and safely, by the way, is to just straight up sue Nancy Pelosi for changing the rules of Congress and so that is exactly what they’re doing. Republicans in the house have filed a lawsuit against Nancy Pelosi for changing the rules as part of the $3 trillion stimulus package and these new rules would allow for members of Congress to have somebody else in Congress cast their vote for them. Now the reason for this obviously is because the CDC still says we need to adhere to social distancing guidelines. We do not need all these people packed into a room and so Democrats who wrote this legislation said, okay, well you can essentially give your vote to somebody else, you know, tell them how you would like to vote. They will come into the chamber and vote for you so that we don’t have to have 435 people packed in here. Republican say, no, this is unconstitutional.

So we’re suing you for violating the constitution with this rule change. Now unconstitutional that’s, that’s the, that’s okay. That’s not even an iffy claim. That’s just a false claim. There’s nothing in the constitution that says you cannot do this. There’s nothing in the constitution that says you have to be physically inside of that building to cast your vote. That’s simply not there. So no, if you’re suing for this being unconstitutional, your case falls flat on the merit. You made the wrong legal argument. The judge is going to throw it out. Sorry, that’s life. But if you were to challenge this some other way of saying this could lead to, you know, oh, what if somebody tells somebody to go vote for them this way, but they vote the other way. You know, there’s gotta be accountability. You may have a case there, an exceptionally weak case, but you may have one.

The question I have though for both Democrats and Republicans is why go about it this weird way? Why make it to where, hey dude, go vote yes for me on this bill. Cool, thanks. Why do that instead of, I don’t know this, you know. I, I’m sure Congress can afford the what is it, $14 a month for the premium version of zoom. And if not, I mean, you could just get Skype, you can afford laptops. You could literally have everybody in there just put a little laptop at their seat, pop it up open. Have Nancy Pelosi being the only one in the room, you know, picking to choose who she unmutes or who she mutes. We could still carry out Congress remotely, folks. We could get a lot more done that way. But Democrats said no, you just tell your body how you want them to vote for you.

This isn’t like going into a deli and ordering a sandwich and say, hey man, while you’re in there, grab me a bag of chips. No, I’m sorry, but you could do this. Like you could literally do this all year, right? And then, then you wouldn’t get to take those month long vacations in August or the two weeks at Easter, the four weeks at Christmas, you know, maybe not take more vacation than most Americans get to take in their entire lifetime. You could actually work a lot more and members of Congress could spend more time in their district listening to the concerns of their constituents. This doesn’t have to be just during the pandemic. This could be a new way to do Congress in general. Right? I mean, isn’t that what we need? Isn’t that part of the problem that we have with these representatives that we’re sending to DC, that some of them have been essentially living there for 30 to 35 years? Losing touch with everyone back home, forgetting about the struggles in your district, not paying attention to what’s happening.

Imagine if they still lived there and all they had to do was go into their little local office every day, turn on the laptop webcam and have Congress. That would change things. But Democrats didn’t want to go that route. Republicans want to go the route of just totally shutting Congress down, which is what this lawsuit’s actually about. They know they have no chance of winning this, regardless of what legal argument they try to make. So they’re trying to put the brakes on Congress. Why? Because it’s an election year and every seat in that Congress and that house of representatives is up for reelection as it is every two years. So Republicans need to paint the Democrats as doing absolutely nothing. The best way to do that is to cripple the entire system by filing a frivolous lawsuit that could end up holding up Congress for at least a couple of weeks and according to Republicans, that may be enough to convince the public that the Democrats aren’t doing anything.