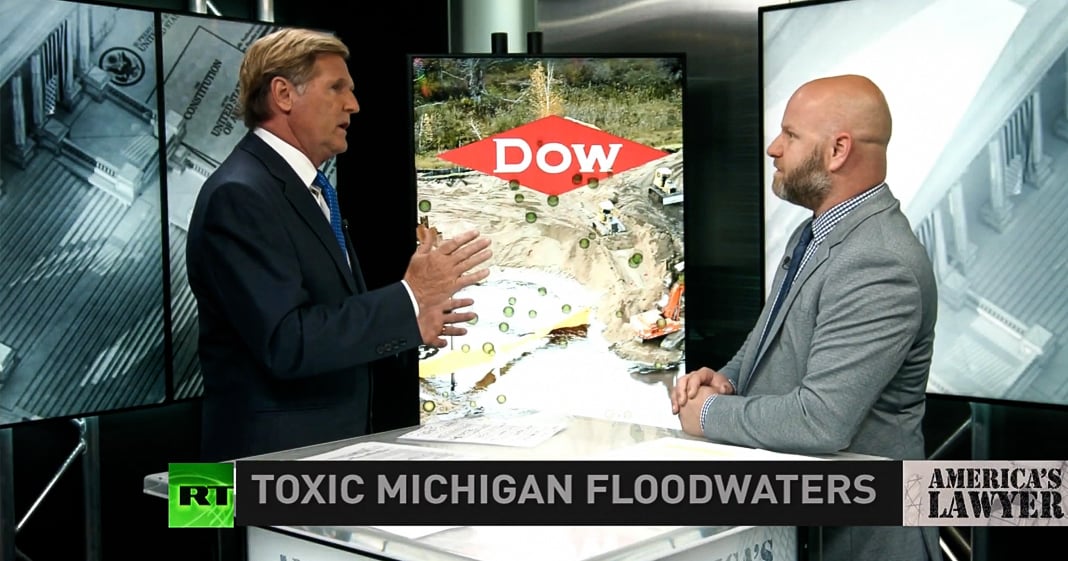 Via America’s Lawyer: A dam burst in Michigan displacing thousands of residents, and Dow now admits the floodwaters are in fact mixing with toxins from the chemical company’s storage ponds. Mike Papantonio & Farron Cousins discuss.

Mike Papantonio: Floodwaters in Michigan last weekend, ended up mingling with toxic chemicals from a Dow chemical plant and I have Farron Cousins from the trial lawyer magazine to talk about it. This is pretty disturbing article. I mean, if you’re a resident or a farmer around that plant, you’re in big trouble right now. But I’ll tell you the take on it was, was so odd to me. The take on it was, well, the federal government’s responsible, no, the federal government’s not responsible for what happened here. They, they’ve allowed the infrastructure to fall apart and they’ve allowed Dow chemical to do everything they wanted to do with their toxins in that Midland area. I, nobody to blame but them. I really don’t see anybody to blame but them.

Farron Cousins: Right, and this is a, you know, we’re suddenly dealing with this issue, but these were failures that were set up for decades. As you mentioned, the infrastructure, the superfund site that Dow chemical was running or, you know, not cleaning up, basically. They needed to clean up the infrastructure there to protect it. The walls around it needed to be higher because they had already predicted both the government and the company that this thing was susceptible to floodwaters. That was a failure. They’d known about it for years. The infrastructure at the dam that failed, failed and caused the flood itself. They knew that needed to be fixed and repaired and updated. The company had actually already lost its license for failure to comply for years. So we’re talking about catastrophic failures across the board, state, federal governments, corporate. You could not have had a more complete failure from every player involved.

Mike Papantonio: Okay. Look, I think back to Detroit. Okay. The water problem in Detroit, same kind of analysis. Infrastructure failure, State government does nothing about it. But now this cat, what was his name? Jacob Carter, scientist for union concerned scientists, comes out, well this is a federal problem. No, it’s not a federal problem. It partially is a federal problem. But when you are in the state and you know this corrupt, I mean, this is one of the most corrupt chemical companies on the globe. I think everybody would agree with that. The corruption is, there’s no end to it. They allow, because this is where their, this is their headquarters, right? So they’re allowing this chemical company to devastate the environment. Local people are doing it. State people are doing it. People that are, when they try to bring a lawsuit, the courts make the, make the lawsuit disappear and now they’re saying, oh, the federal government’s responsible for this, the administration’s responsible. No, this is just a bunch of, of numskulls that have allowed Dow chemical to do anything they want to in that area at the same time that they let their infrastructure disappear.

Farron Cousins: Right, and the infrastructure is where the federal government comes in. But that’s not a sudden thing. That’s not just a Trump thing. That is a Trump, Obama, Bush, Clinton thing.

Farron Cousins: Any one of them could’ve stepped in over the years and said, I’m issuing an injunction. This has to be done now. This is priority. But no overall, this goes right down to local leadership, to state leadership. They’ve known about these problems. The companies have known about the problems. Nobody decided to act and so suddenly these residents see a flood headed their way, a wall of water coming their way, and then they find out a couple of days later that water also was contaminated with toxic dow sludge.

Mike Papantonio: Oh yeah, like, like surprise. I mean, oh, this is a big surprise. Well, when we look at Detroit, it’s the same. The last governor in Michigan lost the race because of this. New governor comes in. She says, I’m going to change all this and does nothing about it.

Farron Cousins: No, she’s been awful.

Mike Papantonio: The infrastructure has been the problem forever. She has allowed Dow chemical because she gets so much money from Dow chemical to do whatever the hell they want to do in, right there in the backyard of the state.

Farron Cousins: Well, and she’s being talked about as possibly the number one pick for Biden.

Farron Cousins: That would be the worst decision ever.

Mike Papantonio: Bad move, bad move. I got to tell you that, that is a, that’s a deal breaker.