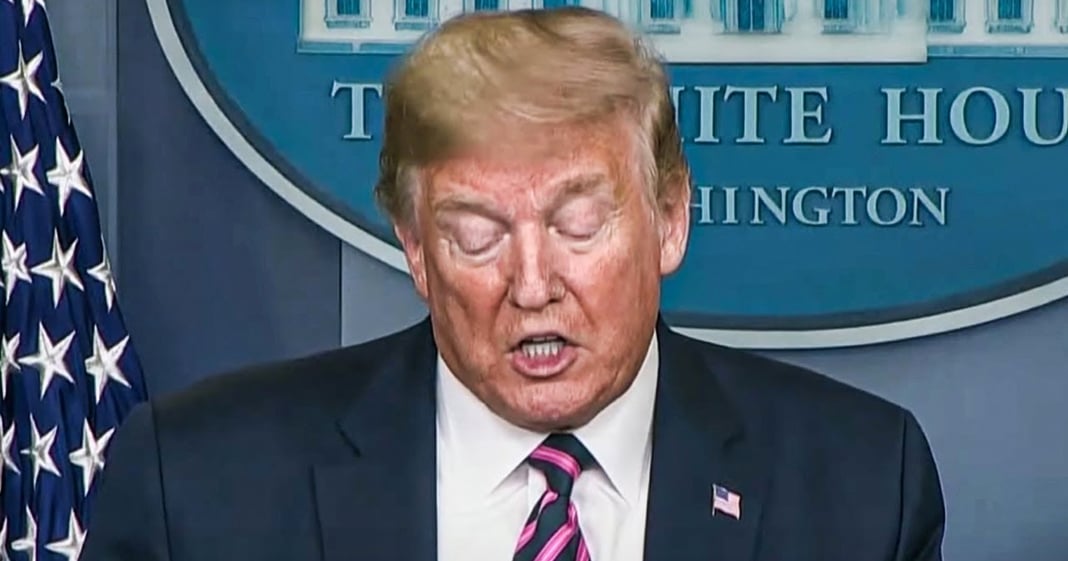 Donald Trump wants to be a kingmaker. He believes that his endorsement is all that a candidate needs in order to be successful in politics. But according to the data, Trump’s endorsement is actually more like a kiss of death, and at least 15 candidates who have received his endorsement have lost elections that they should have easily won. Ring of Fire’s Farron Cousins explains what’s happening.

Donald Trump clearly wants to be a King maker here in the United States in addition to obviously wanting to be the King of the United States, but he thinks that his endorsement and his endorsement alone is enough to push a candidate to victory. He has gone out across this country for years now ever since being sworn in as president, doing rallies where he would bring up somebody running for office, sometimes an incumbent, sometimes a brand new face we’d never seen. Let him talk on stage. Then he would talk. He would tell people why this particular individual is the best possible choice for whatever office it is they were running for. He’d get on Twitter and endorse people, tell us how great this person is. How great that person is, how horrible their opponent is, yada, yada, yada. Trump thinks that he is the one who controls the fate of these human beings and according to new research, he’s actually correct.

He does control their fate, but not in any kind of way that these people need to be thrilled about. Because this new research shows that Donald Trump’s endorsements, rather than being a boost to the campaign, are effectively the kiss of death. The majority of the candidates that Donald Trump ends up endorsing end up losing, or at least so far that has been the case. And this new research says that at least 15 seats, 11 in the House and four in the Senate, 15 of these losses would not have been losses for Republicans had Donald Trump not stepped in with his endorsements. So not only is his endorsement not helping most candidates, but it did effectively cost Republicans at least 15 seats in 2018. Now 15 is a lot, especially the four in the Senate. That’s got to hurt. But that is according to the research, and what the researchers did was they looked at the polls in these particular races, the trajectories, the issues, what was happening in these areas, the past outcomes of elections.

They looked at everything and you can follow the link in the description of this video. Go to this Washington Post article, you know, these, these charts and graphs are all in that article. They’re, some of them are animated. It shows you where things were going, and then it shows you what happened when Donald Trump came in and did his endorsement. Then things started to go really, really, really bad for those Republican candidates, and they ultimately ended up losing, including some who were in very, very safe Republican districts. Right? Like there’s no way this person should have lost it all and then Trump comes in, thinks he’s endorsing a safe person to put another feather in his cap, only for the person to lose. I mean, that is insane. I have to read this from the report here. Endorsed candidates suffered worse electoral outcomes than those not receiving an endorsement.

Even in Senate races where endorsements led to increases in turnout, candidates who received a presidential endorsement were less likely to win than those who did not. So this report does say that, yeah, when he came out and did the endorsement, it did increase turnout, just not for the candidate that he endorsed. It goes on. Trump’s endorsements may have done little to illicit engagement from voters on the Republican side, all the while creating a rallying effect around opposing candidates and increasing engagement among democratic voters. The story then from these findings is that presidential endorsements in 2018 indicated presidential backlash rather than presidential coattails. So rather than Trump going out there and getting people to come vote for his guy, he went out there and got people to vote for the other guy or woman, whoever it was running for office. That is how despised this man is in this country and it’s actually getting worse right now.

So I know Trump’s at home in the white house whining about the fact that I can’t hold my rallies, I can’t go out and meet. I can’t do this. I can’t do that. Trust me, bud, that’s actually working in your favor right now. Just like hiding at home is helping Joe Biden. Both of you, the longer you can keep hidden, the less damage you can do to your campaigns. Because Trump being hidden, having to stay home may not necessarily be hurting his reelection chances, but what it is hurting if he were out there speaking, would be the chances of Republicans holding onto the Senate and taking back the house of representatives. The man is toxic. He is hurting down-ballot Republicans tremendously, but he’s too arrogant to see it.