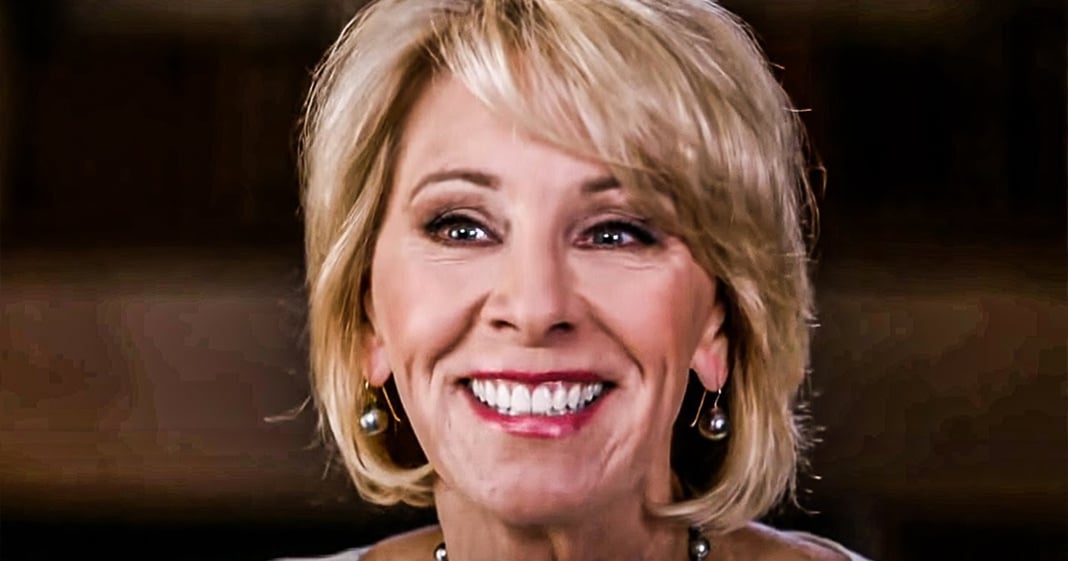 Education Secretary Betsy DeVos is trying to use the pandemic as an excuse to funnel tens of millions of dollars worth of federal aid to private and religious schools that don’t qualify for assistance. DeVos was able to do this by changing the rules back in April, and now millions of poor American children will miss out on a quality education so that DeVos can give big money to her friends. Ring of Fire’s Farron Cousins discusses this.

As part of the CARES act stimulus package, which was the first and really only stimulus package passed by the Congress, signed by the president that actually helped out the American public. But as part of that bill, there was $13 billion allocated to be given to schools across the country and unfortunately it’s up to Betsy DeVos, the secretary of education to dispense that money at her own discretion. Now technically it’s not up to her to just kind of give it to where she wants to give it. She has to follow the guidelines set forth by her own agency. So what Betsy DeVos did, since she can’t just give it to the school she wants to give it to because of those guidelines, she just rewrote the guidelines to make it to where she can give it to whoever the heck she wants to and of course, Betsy DeVos wants to give the money to both religious schools and private schools across the country while starving some of the poorest school districts in the country from this much needed infusion of cash.

And the way she did that was she essentially did away with title one regulations. Title one for anybody who’s not familiar with it, a title one school is a school that has X amount of low income students. That is where a lot of federal money is directed. Right? Because you got to help these schools because they have low income students and, you know, there’s math equations involved. It has to have X amount in this, you know, particular County. There can’t be any other schools within that district where you could send these kids to. There’s all kinds of rules. My wife, who is a public school teacher has tried to explain it to me because she works in a title one school. It is all very complicated. But in short, the more low income students you have the more federal money you were supposed to receive to be able to properly take care of those low income students.

Betsy DeVos doesn’t want to do that. So with this $13 billion instead of counting the number of low income students at a school, Betsy DeVos said, well what if we just count all the students at the school? So if you just have more students, you’ll get more money. And I’m going to go ahead and extend that to private schools and religious schools too, even though they’re not supposed to get anything. I’m going to go ahead and include them in it too. So what’s going to happen is you’re going to have schools, well to do schools here through the United States, private schools that aren’t hurting for money, religious institutions that the constitution pretty much tells us you can’t take federal funds because that would be the United States government propping up a particular religion and they’re going to get the money because that’s what Betsy Davos wants to do.

This is intentionally hurting low income students across the United States. You know, we have talked about Betsy DeVos’ past. Her investments in charter schools across the country. You know, she’s friends with the people that own these private schools and the religious schools and all of that. But that’s not even necessarily what this is about right now. I mean, yes, that plays a role in it, don’t get me wrong. But what this is about is once again a Republican launching a war for no reason at all against low income American citizens. That’s, that’s what this is. This was a sudden infusion of cash for these schools that they were not expecting. You know, they know what their budget is every year. They know what their budget is going to be for the coming year. They have to fight like hell to get that title one funding. Sometimes it’s late.

A lot of times it’s late because that comes from federal to state to local to county. It has to go through a lot of steps before it gets released and these teachers sit there waiting forever for these funds to be released so that they can buy things for their classrooms. So that they can order textbooks. So that they can know which lessons they can or cannot plan for based on what they’re able to order for their classroom. This is important. So suddenly $13 billion was about to come flowing down to them. That would have been amazing. That would have been a gift from the heavens for these teachers who already are not funded enough in their classrooms and Betsy DeVos took it away so that she could funnel tens of millions of dollars to all of her good buddies in the private school industry.