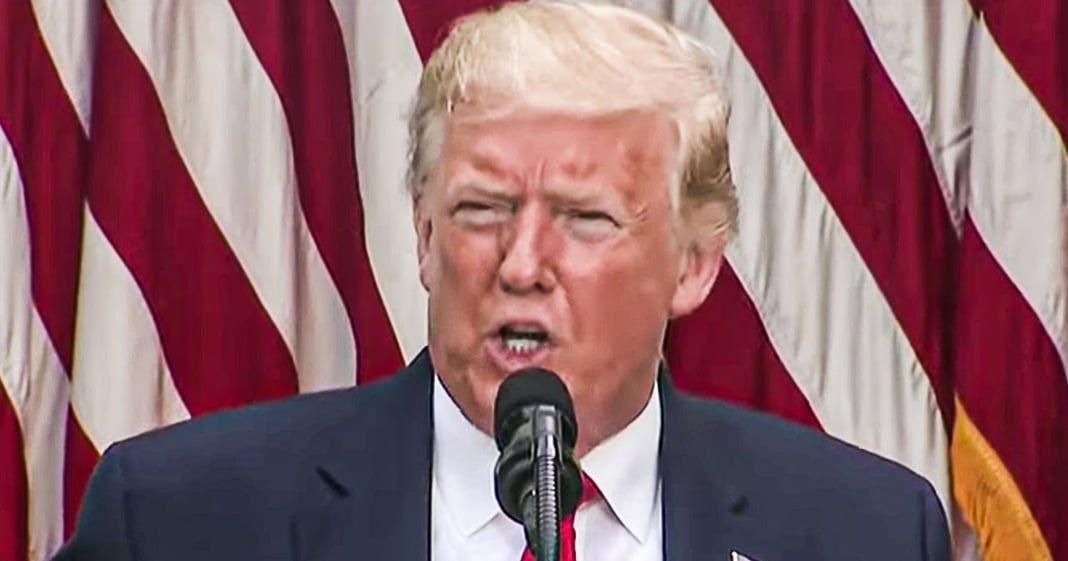 Donald Trump threw a full-blown tantrum on Tuesday evening after Twitter decided that they had seen enough of his lies and wanted to get the truth out to the American public. In a tweet about voter fraud where the President lied about fraud being common with vote by mail, Twitter added a link for people to “get the truth” about the issue. The President lost his mind after that, going on a long tirade about how he’s going to make them pay. Ring of Fire’s Farron Cousins explains what’s happening.

So on Tuesday evening, Twitter decided to finally do something about the nonstop lies coming out of Donald Trump’s Twitter feed and they put a little fact check on one of his tweets about all the fraud allegedly happening with vote by mail across the United States. Twitter put a little thing on there. It said get the facts about vote by mail. And they did it because as a Twitter spokesperson said quote, his tweets contain potentially misleading information about voting processes and have been labeled to provide additional context around mail-in ballots.

The president flew off the handle as a result of this vowing to somehow get his revenge against the social media giant in a series of tweets, the president showed the world how crazy he truly is. Uh, and here they are. This is just four of them. By the way, this is four tweets. This is not all he had to say about it, but this is some of the crazier things he had to say about it. Here they are starting with Twitter is now interfering in the 2020 presidential election. They are saying, my statement on mail-in ballots, which will lead to massive corruption and fraud is incorrect based on fact checking by fake news. CNN and the Amazon Washington post Twitter is completely stifling free speech and I as president will not allow it to happen. Republicans feel that social media platforms totally silence conservative voices. We will strongly regulate or close them down before we can ever allow this to happen. We saw what they attempted to do and failed in 2016 we can’t let a more sophisticated version of that happen again. Just like we can’t let large scale mail-in ballots take root in our country. It would be a free for all for cheating, forgery and the theft of ballots. Whoever cheated the most would win. Likewise, social media. Clean up your act now.

Yeah, I have to laugh. You kind of just have to laugh it out at this point, right? The man is a loon. The man lies through his teeth. Every opportunity he gets. I’m surprised Twitter did not come up with a fact check for his little angry childlike tantrum here. Like fact check. Nothing you’re saying is accurate. You know, you look at some of these conservatives out there, uh, they’ve got far more followers. They are not silenced. They have a much bigger reach. It’s just the crazier ones on outlets like Facebook when you go out there and spread blatant propaganda or hatred. Yeah. Some of them got shut down. A couple of them.

As for the claims of being shadow banned like Matt Gates has made, that’s not even a thing.

Not even a thing.

So I really have no idea what the president is talking about here. Like what they in 2016 what did they do in 2016 well, we found out a lot of foreign accounts were buying ads to benefit your campaign, Donald, I mean other than that, what role did they play in 2016 so we don’t really know what you’re talking about unless of course you’re outing yourself and your campaign for, for doing the things that Mueller was investigating for. I don’t really go, I don’t know. I don’t know what you’re getting at because you’re insane folks. All Twitter did was what they should have done years ago, and not just to Trump, but to any statement coming from any politician left, right? Center. Doesn’t matter. They should fact check them. People deserve to know the truth. Same thing with Facebook. They should be doing this more aggressively. They’re not, they failed us. They’ve let us down. They have allowed the spread of this so-called fake news, but they are not a part of the fake news.

If they do not get more aggressive with this, we are going to run into lots of problems in 2020 if they do not, you know, uh, very clearly label who is paying for what on these sites, who’s paying for a promoted post, who’s paying for an advertisement, things like that. Then yeah, this is going to lead to a great spread of misinformation. But it doesn’t matter if it’s coming from a Russian bot as the establishment always likes to say that everything is, they disagree with Russian bot or the president himself or anything in between. Misinformation needs to be called out. It needs to be fact check. And Twitter right here did the right thing. The president on the other hand, showed the world once again that he is a whiny little infant who can’t even take the slightest amount of criticism or God forbid, somebody telling him that what he said wasn’t true.