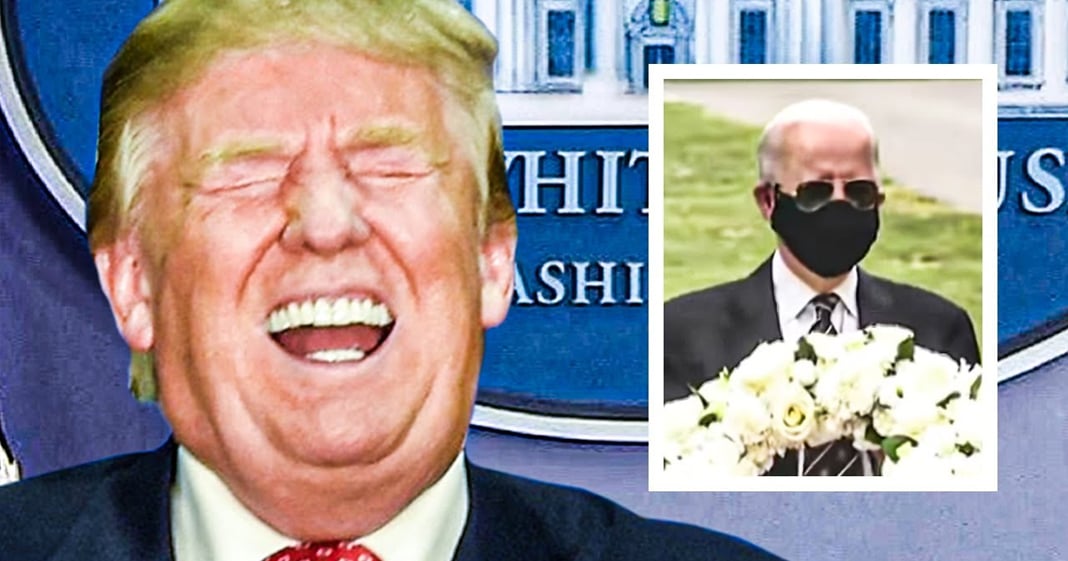 Donald Trump apparently thinks that it is hilarious that Joe Biden doesn’t want to get sick or disrespect frontline workers by ignoring CDC guidelines, and he shared a tweet mocking Joe Biden’s appearance from Monday where the former Vice President was seen wearing a face mask. This isn’t humor, it is weakness – that’s what the President is displaying in his attacks, as Ring of Fire’s Farron Cousins explains.

Donald Trump has made it clear that he does not want to be seen by anybody in the general public while he is wearing a face mask to protect himself and those around him of the spread of Covid 19. Now, we saw last week when he toured that Ford plant in Michigan that has been repurposed to start making ventilators. He did wear a mask for a brief period, but once he realized the press could see him, he took the mask off. You know, did not want to give the press the pleasure he said of seeing him in the mask, didn’t want to give them the pleasure. So Monday after more than two months of staying inside his home, former vice president Joe Biden finally leaves the house. He goes to a reef laying ceremony on Memorial day for a, at a Memorial, excuse me, in Delaware.

Shows up, he’s got a mask on. His wife has a mask on. Everybody around him has the mask on. A little crooked. I mean, to be honest, he was a little bit lopsided on his face, not much, but a little. He had his sunglasses on. And then Fox news, political commentator, Brit Hume, sent a picture of that out on Twitter with the caption. He said, this might help explain why Trump doesn’t like to wear a mask in public: Biden today. And then Donald Trump retweeted that. The president of the United States retweeted a tweet mocking Joe Biden for wearing a mask. Now there are countless things, endless things really to attack Joe Biden about. You know, there, there’s his records. There’s the allegations against him. There’s his nonexistent platform that includes absolutely no progressive policies and basically just to return to status quo. Literally any of that, you want to go after him for any of that. That is fair game.

Wearing a mask in public during a pandemic when the centers for disease control and convention tell you that that is what you need to do. That’s not something to mock. That’s like mocking him for driving down the road while wearing a seat belt. It’s like seeing him on a motorcycle and he’s wearing a helmet. That, that’s not a stupid thing. That’s not a sign of weakness. That’s a sign of not being a complete and total moron like Donald Trump is, and that is exactly why Trump was mocking him. There was nothing wrong with the way Biden looked. Yeah, the mask was slightly lopsided on one side of his face, but that didn’t matter. That honest to God didn’t matter and if you think it does, then you’re also a moron. And I’m not going to be nice about this, and I’m not going to sugarcoat it. It is what it is. Not wearing a mask in public as both Trump and Melania have done, by not wearing masks in public.

That is disrespectful to all of the doctors, all of the nurses, all of the healthcare workers, all of the police officers, the firefighters, even the grocery store clerks. It is disrespectful to each and every one of them that shows up to work every single day during this pandemic providing services that this country desperately needs. They’re out there risking their lives. So the least we can do, literally the least we could do is cover our friggin mouths. But to Trump, that’s a sign of weakness. To all of these more moronic right-wing protesters out there, that’s a sign of weakness. No, your actions are a sign of stupidity, gross stupidity, dangerous, deadly stupidity. That’s what the rest of us are having to deal with. That’s why we do have a death toll that’s approaching 100,000 in this country. You want to go after Joe Biden for his record, do it. We’ve done it. We’re going to continue to do it. But following safety guidelines, trying to not make this pandemic any worse, trying to not get other people sick. That’s not something that any intelligent or credible human being in this country should ever engage in.