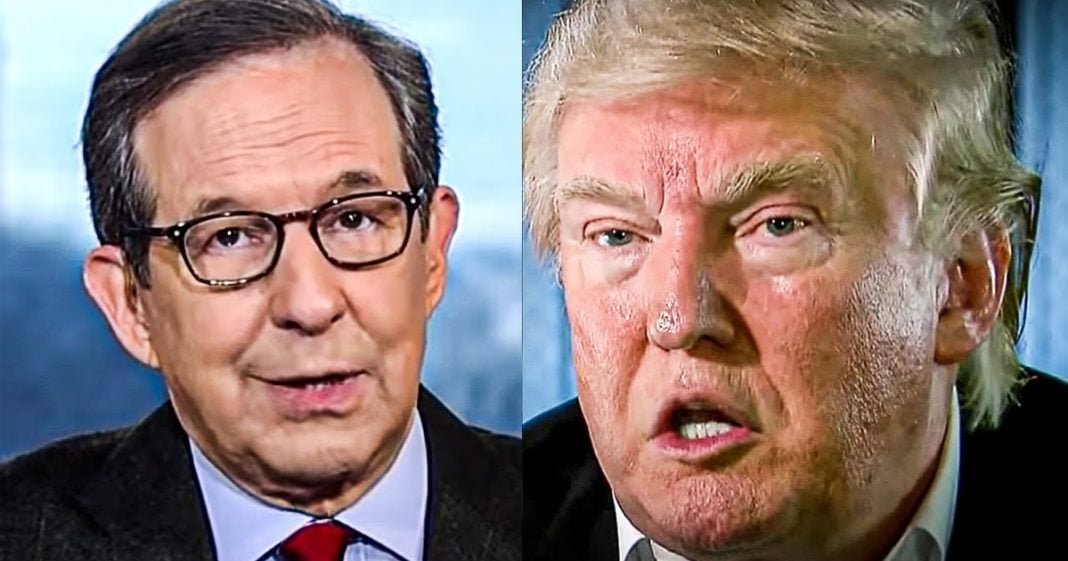 Fox host Chris Wallace is one of Trump’s favorite targets at the network, and he’s opening himself up for even more attacks from the President. Late last week, Wallace said that Trump was absolutely lying about voting fraud in the United States, a move that many conservatives likely won’t be happy about. But Wallace has the facts on his side, as Ring of Fire’s Farron Cousins explains.

You know, I absolutely love the fact that Donald Trump doesn’t seem to understand that the more he pisses off the people at Fox news, the more likely it is that they’re not going to be nice to him in the future. He doesn’t seem to grasp that concept yet that is exactly what’s playing out before our eyes. You know, just a couple of days ago, we had a judge Napolitano, Fox’s legal analyst, admit that Trump does not have the power that he thinks he has to override state governors. And then we had Chris Wallace, who Donald Trump has taken personal shots at in recent months, flat out admit that the president is lying about the amount of voter fraud here in the United States. Now this is in response to Donald Trump’s claims that the democratic efforts to get universal vote by mail in place before November would somehow increase voter fraud.

He said this would increase ballot harvesting by bad faith actors who would forge names, forge signatures, change votes, do whatever, the president says, to make sure the Democrats win in November. And to that point, Fox news host Chris Wallace had to say the following. He said, I’ve done some deep dive into it. There really is no record of massive voter fraud or even serious fraud from mail in voting. It’s been carried out in Republican States. It’s being carried out in Democratic States and there is no indication that mail in voting as opposed to in-person voting tends to favor one party over another.

He went on to say that the only instance of vote by mail fraud that we have seen in the United States happened in North Carolina at the hands of a Republican operative working for the Republican nominee for the ninth congressional district who went around and had his people and himself harvesting ballots, changing ballots, forging signatures, filling out ballots for people who simply didn’t vote, and yeah, that was voter fraud, but it was done at the hands of Republicans. In 2016 for the presidential election, there were only four instances of voting fraud in the entire United States. Three of those happen to be people who voted for Donald Trump twice and the fourth was just a poll worker down in Miami who filled in somebody ballot for a mayoral candidate. So that wasn’t even a federal one. So all three of the federal cases of voter fraud that we saw in the last presidential election, all three were for Republicans trying to vote for Trump twice.

And Chris Wallace understands that because as he said, he did a deep dive into it. But you don’t even really have to do a deep dive into it because others have done it for us. We have seen Chris Kobach and his voter fraud commission come back tails between their legs, heads hung low singing, saying, uh, we, we couldn’t find any voter fraud. You know, we, we looked, we really looked and these guys trust me, they wanted to find it so bad. They really, really went out there, turned over every rock and rotting log they could and they came back with nothing. But Trump is still out there pushing that because he knows the more people have ballots, the more people are going to vote and that never ends well for Republicans. But he is at the point right now where even Fox news hosts have to go out there like Chris Wallace and say, look, he’s lying to you. This is not the truth. This is not reality. This is not what actually happens in the United States. The man is a fraud. Please see the light. Now, Donald Trump has not yet issued a Twitter tirade against Chris Wallace for this segment, but we have to imagine based on past actions that it’s probably coming pretty soon.