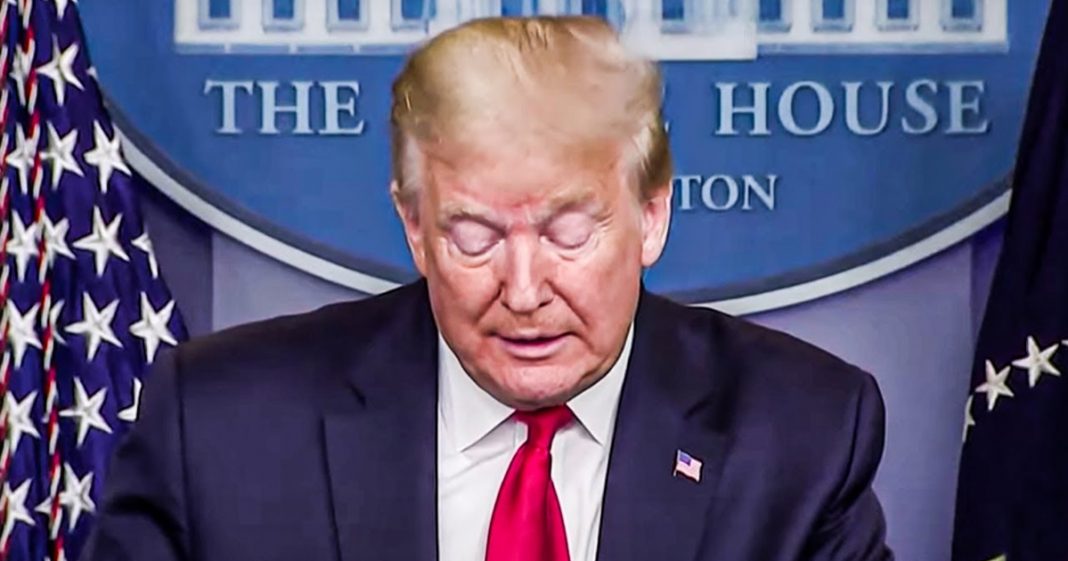 Donald Trump knows that voter fraud is rare in the United States. The Republican Party also knows this. Their own commissions have proven this. But still, both Trump and the Republicans are working around the clock to convince Americans that voter fraud is as easy to find as a pizza parlor in this country because they desperately want to suppress the vote. Ring of Fire’s Farron Cousins explains what’s happening and why.

Donald Trump is still kind of freaking out over the fact that more and more Americans now say that we need universal national vote by mail, especially as we’re gearing up essentially to vote during a pandemic. We need a way to make it safe and most voters in the United States now say that the best way to make it safe, is just send the ballot to my house. I’ll fill it out, mail it back to you. We’re good to go. But Trump doesn’t want that because as the man said two months ago, if you had more people voting, that would spell the end of Republicans in the United States. He knows what’s up. He knows what’s at stake. And he knows that the biggest reason Republicans are still in power anywhere in the United States is because we have a voter participation rate of under 50%. But if we were to mail ballots out to every single eligible voter here in this country, suddenly voting’s not a hassle anymore.

You don’t have to take off work. You don’t have to go stand in long lines. You don’t have to drive anywhere. You don’t have to find a ride. You don’t have to do anything other than, oh, I got a piece of mail. So let me grab a pen. Here you go. Send it back. Postage paid already. Pretty sweet deal, right? You’re going to have a lot more voters that way. But Donald Trump on Sunday, once again, took aim at this practice by making stuff up. He said the following, he said, quote, the United States cannot have all mail in ballots. It will be the greatest rigged election in history. People grab them from mailboxes, print thousands of forgeries and force people to sign. Also forge names.

Um, no, no. Literally none of that. None of that is true folks, not a single word of it. The man’s just straight up lying because he has nothing else to go on. His own voter fraud commission tells him that, hey, everything you’re saying in that tweet is a lie. And he’s known that for a couple years. He is still bitter, obviously about losing the popular vote by 3 million votes. You know, Hillary Clinton did in fact win that. More people voted for Hillary than voted for him, yet he’s still got to be president because our system in the United States sucks. He’s still mad. He still blames that on voter fraud, which didn’t exist. In fact, here’s an interesting little tidbit for you. In the 2016 presidential election, there were four cases of voter fraud found. Three of those four, 75% of them were people who voted for Donald Trump twice, so three of them were Trump voters.

The other one, the little 25% that was actually just a poll worker down in Miami who filled in somebody’s vote for mayor because they didn’t vote for mayor. There was not one single instance of voter fraud for anyone attempting to vote for Hillary Clinton when they weren’t allowed to or supposed to. Yet there were three instances where they did in fact do that for Donald Trump. They know voter fraud doesn’t exist and they know that when it does exist, it actually tends to benefit Republicans. I mean, look at what happened, I think it was what South Carolina, the ninth congressional district, and maybe it was North Carolina, my apologies and get my Carolinas mixed up every now and then. But, where you had the Republican operative who was going around doing the ballot harvesting and filling out ballots for people for the Republican candidate that he was working for. Yeah, that’s another Republican instance of voting fraud.

But when you take that bad faith actor out of it, voting fraud is even more rare than corporate tax fraud. But we’re not doing anything about that. We’re letting them get away with it. We’re giving them more incentives to get away with it. But when it comes to expanding the right to vote, Republicans are terrified because they know what will happen. As I mentioned at the beginning, Trump knows what will happen. He’s admitted it. If you have higher voter participation in this country, it spells doom for Republicans. That’s the bottom line. That’s why they have spent decades trying to enact these voter purges. Trying to enact these poll taxes like they tried to do down here in Florida. Trying to put the voter ID laws in place, trying to gut the voting rights act things they’ve all done, by the way. They’ve been successful with these, the gerrymandering, all of that. But you get around all of that on the democratic side by simply saying, all right then, vote by mail. How about that? Suddenly, even those in the most gerrymandered of Republican districts, and I’m looking at you, Dan Crenshaw, even you would be in trouble if the voter participation or participation rate suddenly surges greater than 50%.