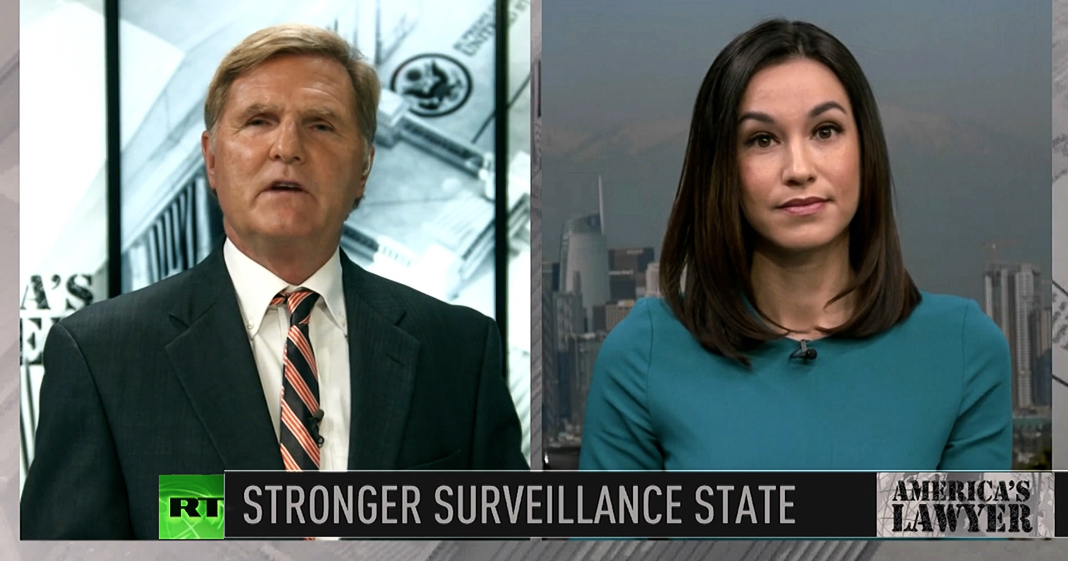 Via America’s Lawyer: While contact tracing is making waves as a further threat to privacy rights, RT Correspondent Brigida Santos joins Mike Papantonio to bring us up to speed on the Patriot Act renewal, including amendments which could extend its reach to our online browsing activity.

Mike Papantonio: The Patriot act is up for extension with the USA freedom authorization act of 2020. The votes have now all been tallied for several amendments and RT’s Brigida Santos joins me now to talk about the status of those votes. Brigida, you followed these kinds of stories a long time. Give me your take on what’s happening in Washington with the Patriot act.

Brigida Santos: Well, look, everybody’s so worried about the coronavirus right now, but there are other things going on behind the scenes. I know that Congress has taken some time off because of this, but they have been voting on these bills and these amendments to the Patriot act. Now this bipartisan amendment that was introduced by democratic Senator Ron Wyden and Republican Senator Steve Daines received 59 of the 60 votes that were required to pass and this bill would essentially ensure that under section 215 of the Patriot act, they could not be collecting people’s internet search histories and web browsing histories as well.

But it did not pass by one vote and it didn’t fail due to a lack of bipartisan support. But reportedly due to the absence of four senators. Now, among those missing from the vote were Senator Lamar Alexander who was in self isolation following the covid 19 diagnosis of a fellow staffer. Washington state Senator Patty Murray was also absent. An aid for her says that she would have voted in favor of the amendment, securing it enough votes to pass. But she’d actually been on her way back to DC when the vote was called. Senators Bernie Sanders and Ben Sasse were also absent, but it’s unclear why.

Mike Papantonio: Well, tell me, tell me about the amendment. Okay. There was, there was an attempt to say, we need to revisit what’s going on with the Patriot act. We think it’s being used in ways that it shouldn’t be used. We need to, we need to take another look at it. And so there was an amendment that was attached to the USA freedom reauthorization act as a, I think it’s called, and it was introduced by a Senate majority leader, Mitch McConnell. What can you tell me about that provision and what would it have meant to, to take another look at the Patriot act in a way that’s, where we’re honest with ourselves where there is no more privacy in this country. Give me your take.

Brigida Santos: Well, yeah. McConnell’s proposed amendment to the USA freedom reauthorization act would essentially allow the FBI to collect web browsing histories from anyone without probable cause. Now since the Wyden/Daines amendment failed, McConnell’s provision unfortunately stands for now. While the USA freedom authorization act cleared the Senate, it’s not going to the House where privacy advocates are expected to propose some more changes. So if citizens are concerned, they can still reach out to their elected representatives and pressure them to take action. But unfortunately in the House, at least 10 Democrats did side with Mitch McConnell here and that includes Diane Feinstein, Nancy Pelosi and Mark Warner. So it’s, it’s unclear whether they’re gonna, whether people asking for the House to do anything is really going to be effective.

Mike Papantonio: Your position would have been at least let’s take a look at it, see if we can modify it in a way that’s more, you know, it’s, it’s a little fair to both sides of that argument, I think is, has been your position on that. Look, thanks Brigida. Thank you for joining me. Okay.